Hashknife on the Chisholm 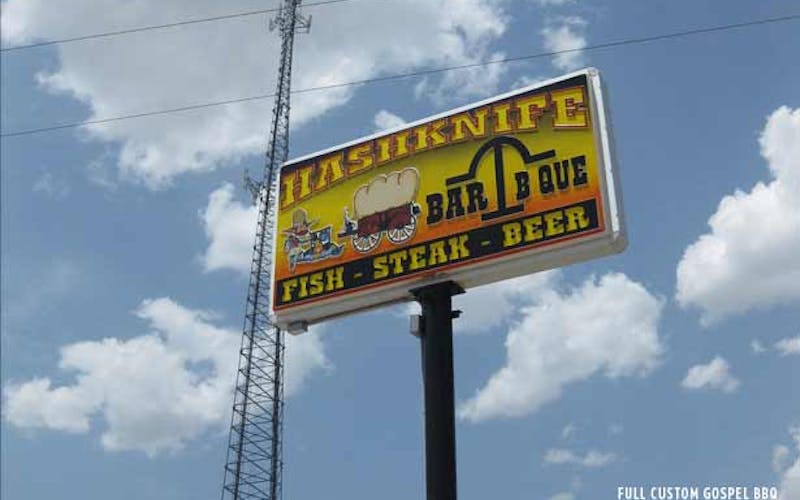 Get one of the Big Ol’ Burgers, a half-pounders made from 100 percent ground brisket.
Full Custom Gospel BBQ

Staunch traditionalists who refuse to eat meat that’s been smoked in a gas-fired pit should drive right on past this remote joint just north of Mineral Wells without stopping. That way, there’ll be more of the smoky brisket—cut into thick, beautifully fatty slices—for the rest of us. And the ribs, which devotees (mostly oil-field workers, farmers, and folks involved with cutting horses, which are big around here) would likely rather we not mention, lest there be a run on the pecan-smoked pigcicles, which are kissed with a hint of sweetness. Now, not to further kick up dust on the matter, but if pitmaster Jim McLennan—yep, that’s him in the wide-brimmed palm-leaf cowboy hat—can produce barbecue this delectably smoky out of a gas oven, we’re willing to overlook his preferred fuel source. He takes equal pride (rightfully) in his peppery hot links, Big Ol’ Burgers (the half-pounders are made from 100 percent ground brisket), and griddle-fried chicken-fried steak. His wife, Lesa, earns bragging rights of her own for her diet-wrecking desserts, including scratch-made pies (chocolate, peanut butter, and coconut, baked fresh on Thursdays), the best-selling banana cake, and the Oil Field Pudding, which is just a smidge sweeter than Jim’s vinegary signature slaw. Once you’ve ordered your small feast at the counter (just past the shuffleboard table), pick a tall barstool inside or a picnic table out front of the humble red building, which used to be a filling station of a different kind.