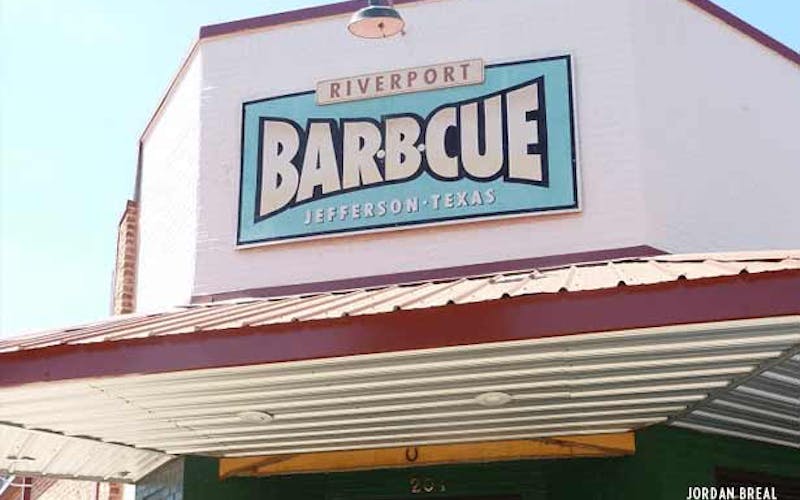 Joseph’s Riverport Barbecue was rebuilt after a devastating fire in 2012.
Jordan Breal

A devastating fire in 2012 destroyed all but the thin brick facade of this joint, which faces Polk Street in downtown Jefferson. But once the flames were extinguished, owner and pitmaster Stephen Joseph started rebuilding, and seven months later he was christening the new Bewley smoker. The refurbished interior is now decorated with all manner of farm implements and just enough but not too many mounted animal heads. Place your order at the far end of a long dining room, which is filled with large communal tables and folding chairs. Meats are sliced in the kitchen, but the meat cutters are within shouting distance if you have special requests. A generous three-meat plate should be more than enough, but they sell by the pound here, so it just seemed more proper to get a sampling of the entire menu of meats. Joseph’s offers a welcome respite from the unfortunate regional practice of trimming away all the fat and crust from a brisket and serving it gray and sauce-drenched—all the goodness is left on here, and sauce is unnecessary. A stout black crust held just the right amount of seasoning, and a layer of buttery fat added silkiness to the already moist slices. Pork ribs occupy the sweeter end of the spectrum, with a vinegar-and-mustard-based finishing glaze that gets its sweetness from brown sugar. They’re cooked well, with juicy meat that comes easily away from the bone. The sausage from Kountry Boys had a solid kick of spices and a good snap. The skin on the chicken lacked crunch, while the turkey had formed an odd thin “skin” of its own (Joseph said he struggled with getting the breasts done before the unfortunate surface texture developed). In both cases the meat beneath was delectable with the right level of salt. This is barbecue that’s on another level from most of what can be found in this part of the state.