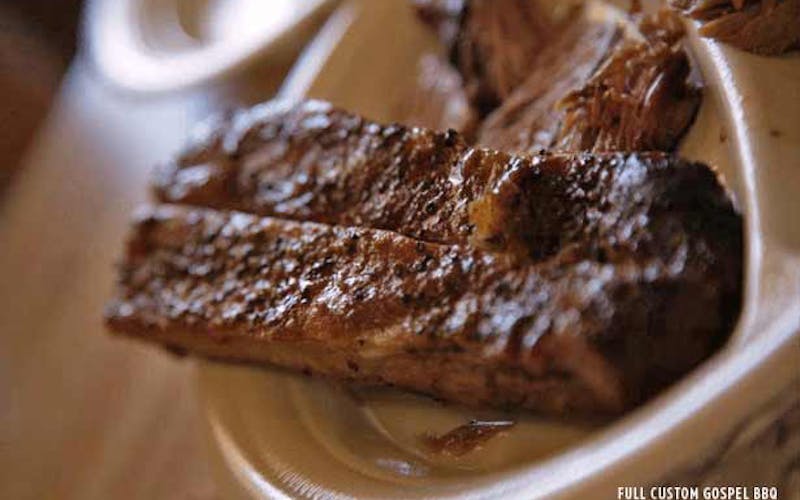 If Miller’s were in Austin, it might have started in a food truck. Instead, Dirk Miller began cooking in the front room of his meat-processing and taxidermy business, which opened in 2006. First came sausage wraps and pulled pork in 2008; he started “throwing briskets” on the smoker a year later. Good move, as his brisket is now one of the best in the state, with great flavor, nice bark, and juicy, melty, beautifully rendered fatty slices. In 2011 Miller took the plunge and converted the building into a full-time restaurant (the meat-processing operation was moved to another building). He built out a roadhouse-style dining area in the back to supplement the cramped front room with yellow booths (taken from a former Subway) and started cooking. The result? Miller’s serves up around five hundred pounds of its own pork-and-beef sausage each week: regular, jalapeño-cheese, and a pre-smoked hot link (they also have dried “snack sticks” and a brisket summer sausage). All of them are excellent: a crumbly yet firm well-seasoned filling in a tight, nicely smoked casing. No sauce is needed for the brisket, naturally, but it’s the perfect tangy-sweet accompaniment to the hot link on a piece of white bread. Potato salad is made elsewhere, but the beans are prepared in-house and deliciously peppery and simple, with no added flavoring or hunks of meat.

For the first couple of years, Miller’s maintained a casual, “until we run out” sort of air. But now that business has picked up, Miller and his right-hand man smoke in shifts (with one starting at three in the morning and one at eight), meaning you can show up here for supper and be sure you’re getting meat that hasn’t been sitting for very long. Pork ribs only get a turn on Friday and Saturday, which is also when the cornbread makes an appearance. Dirk’s wife, Lisa, makes both that and the pies, including coconut-pecan, which sells out every day, and County Fair, with chocolate and peanut butter chips and walnuts. Miller’s doesn’t have a billboard on Interstate 35, but it’s very close to the highway, making it an ideal place to stop on a Dallas-Austin jaunt.