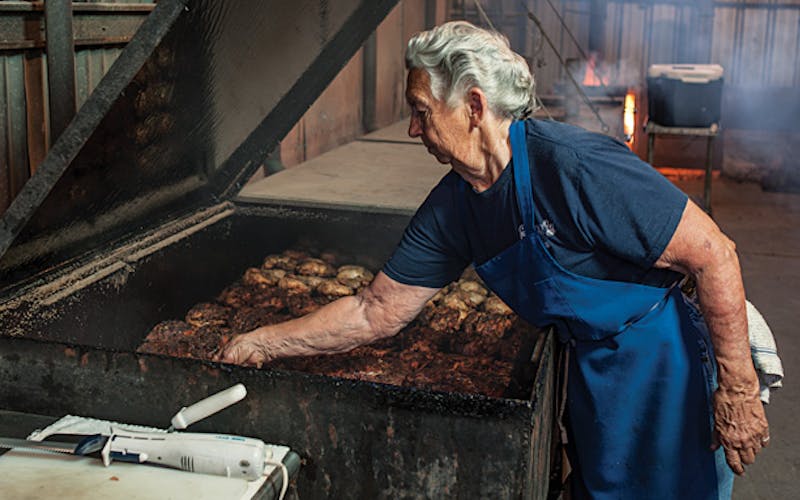 Rating: 4.75
Opened: 2003
Pitmaster: Tootsie Tomanetz, age 78
Method: Post oak; indirect-heat pit (brisket); direct-heat pit (everything else)
Pro tip: Arrive no later than nine in the morning if you want to order from the full menu.

For some in the small town of Lexington (population roughly 1,200), Saturdays are as holy as Sundays. It’s hard to miss these devotees. They congregate at the end of Main Street, within view of some grain elevators dressed in a gingham rust—a line of farmhands, ranchers, well-off weekenders, and groggy young Austinites who woke up in their cutoff shorts. Gathered outside the small red building that houses Snow’s BBQ, they await their turn to commune with some of the state’s most perfect meat.

Snow’s has an outsized reputation (thanks, in part, to this magazine’s naming it the state’s best joint back in 2008), but it remains a no-frills operation: a homey kitchen with painted wooden signs; old picnic tables beneath a galvanized-metal roof, completely blackened with smoke; and an array of gloriously sooty pits, including a three-level monster the size and shape of a submarine. Pay close attention if it’s your first time visiting Snow’s. That woman out back in the apron is Tootsie Tomanetz, quite possibly the greatest female pitmaster in Texas history. She begins her vigil at two in the morning every Saturday; with the help of her son Hershe and Snow’s owner, Kerry Bexley, she tends the fire throughout the night to maintain a temperature of between 250 and 275 degrees. The result? Brisket with a velvety mahogany crust and deeply flavorful meat so tender it almost melts. We prefer the fatty brisket, though the lean is plenty moist. Either one is capable of achieving transcendence, but if you ask Tootsie, she’ll tell you her specialty is the pork steak, which is cooked in the direct-heat pit. It’s a cut from the shoulder (where most pulled pork comes from as well), and Tootsie has its number. The meat comes out like no pork you’ve ever tasted—as full and luscious as a great beef steak, shot through with pockets of delectable fat.

Other meats are excellent, but they have a hard time living up to the incredible standard set by the brisket and pork steak. The sausage, a beef-pork blend made by the butcher down the street, is very good—succulent and smoky, with a granular texture—and the ribs are fine, though not as tender as they could be. The sauce, tangy and sweet, usually sits forlornly on the table unused (though it’s a nice addition to the ribs). The buttery pinto beans are so simple and silken that the fact that they are free (scoop as much as you’d like from the crockpot) seems like management oversight. The pecan pie, from Fourth Street Bakery, holds its form and is deliciously balanced, but with meat this good, even the dessert-obsessed are better off finishing their meal with another helping of the brisket or pork.