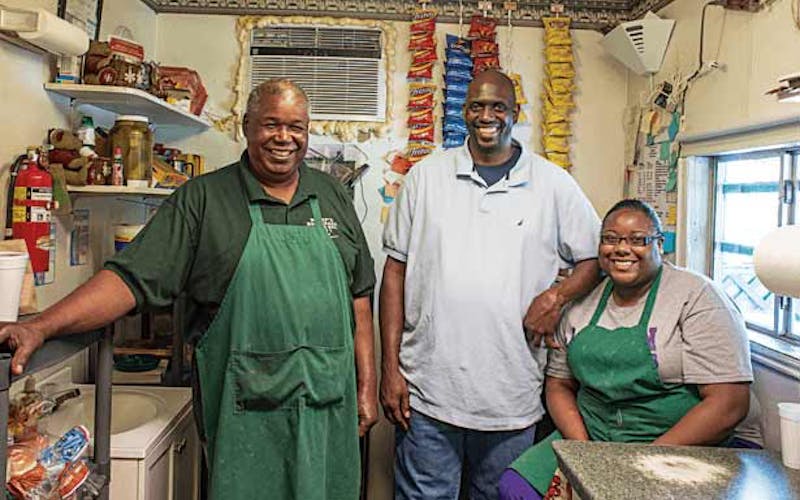 You’ll smell Whup’s long before you see it, and despite signage and GPS, you’ll probably miss the left turn that you have to make from Business State Highway 6. This cozy joint is not so much off the beaten the path as on it: a small, tidy house on a potholed dogleg road that’s dotted with condemned, deteriorating shacks. Not so the home of Bennie Washington’s sister, which is next door to his restaurant and accounts for its location here. Washington started smoking meat in his backyard in the mid-seventies and had a short-lived joint in the nineties. He built this place in 1999. The smoker is around the side, but you can still see all the wood piled up near the basketball hoop. Seating is outdoors and limited (three tables); after parking on the curbless, precipitously trenched side of the road, we joined a group of good ol’ boys who had already ordered. While we waited, two different women pulled into the driveway to pick up their family’s takeout orders. It’s not easy to make the top fifty when brisket is the third-best option, but Whup’s is still smoking beef better than anyone in nearby Waco, and its other options shine. Ribs are the star, even when not perfectly prepared—the meat came off the bone too easily, almost to the point of being “pulled,” but the outer crust still had integrity, and the flavor was spectacular (Washington seasons the meat when it’s about 65 percent cooked). There’s also snappy, heavy-cased, tasty pork-and-beef sausage from Eckermann’s, as well as a decent hot link (with less of the crayon color that you get from most commercial red hots). Like most every joint in the general vicinity of Waco, Whup’s does a version of the Vitek’s “Gut Pak” (here it’s called the “Beandito”). We’re not sure if concocting one of those extreme Frito pies with the best possible smoked meat is an upgrade or beside the point, but hey, when in Baylor country, do as the Bears do.