In a campaign-style speech at an energy conference in Houston on Wednesday, Secretary of Energy Rick Perry announced a national energy policy that he dubbed “the new energy realism.” The tenets of this new approach, he said, were a belief in innovation rather than regulation and a warm embrace of the fossil fuels that scientists believe are responsible for climate change.

With near-messianic fervor, the former Texas governor extolled the blessings of cheap, abundant energy, warning that a move away from fossil fuels would stall growth in developed countries and doom developing countries to “a future of poverty and want.” Noting that around a billion people lack access to electricity, he argued that “we have a moral responsibility to reduce that number substantially in the coming years.”

Perry contrasted his new energy realism with the “pessimism” he said had characterized American energy policy for too long. “We all remember that picture of Jimmy Carter sitting in front of that fireplace, talking about malaise, talking about draconian regulation of energy,” he said. (Perry’s memory is a bit faulty: President Carter delivered his famous 1979 “crisis of confidence” speech from the Oval Office, not in front of a fire, and never used the words “malaise” or “regulations.”)

The American shale revolution that began in the 2010s, Perry argued, means that conservation efforts such as those Carter proposed are no longer necessary. Instead, we have entered the age of “energy abundance.” The only remaining obstacles to cheap energy, he said, are international agreements like the 2016 Paris Agreement, which committed its 195 signatories to keeping the increase in global average temperature to lower than 2 degrees Celsius above pre-industrial levels. In June of 2017, Trump withdrew the U.S. from the agreement.

Perry criticized the Paris Agreement as harmful to economic growth in developing countries, even though all such countries signed on to the treaty. Instead, he called for a new “global alliance” that would embrace fossil fuels, and even offered to lead such a coalition of the willing. He couched the proposal in evangelical language: “Let all nations embrace it, and the spirit of imagination and innovation that drives it, for their own sake and for the sake of the world.” One almost expected to hear an “Amen!” from the audience.

Perry delivered his address at CERAWeek by IHS Markit, a major annual energy conference founded in 1983 that brings CEOs and oil ministers from around the world to Houston for a week of discussion and networking. After his speech, the energy secretary engaged in a brief Q&A with the conference’s founder, energy historian Daniel Yergin, who began by thanking him for a “very vigorous exposition of the new energy realism.”

During the Q&A, Perry discussed his plans for the remaining three years of President Trump’s term. One of his top priorities is protecting the country from the possibility of a Category 5 hurricane destroying the Houston Ship Channel, which would take out much of the country’s oil refining capacity. But rather than endorsing one of the many proposals for protecting the ship channel, such as the much-debated Ike Dike, Perry advanced a novel solution: building a new ship channel in the Appalachians.

“From a national security standpoint, it made sense to ask where could you go to duplicate that [oil refining] footprint in this country? And the Appalachian region came to mind.” Noting that much of the Appalachians sit atop the Marcellus and Utica natural gas formations, Perry argued that it made sense to build redundant refining capacity deep in the heart of Trump Country—which would, as a side benefit, be a “powerful tonic” for the Rust Belt economy.

Of course, there are so many refineries along the Houston Ship Channel precisely because it’s a ship channel; it’s unclear what incentive oil and gas companies would have to build extra capacity in the middle of Kentucky. (If the federal money will be earmarked as such an incentive, the fact went unmentioned by Perry.)

In a sign of just how much the U.S. has isolated itself, Perry was followed at the podium by Ben van Beurden, the CEO of Royal Dutch Shell, who described how the oil and gas giant planned to cut its carbon footprint in half by 2050 through investments in natural gas and renewable energy sources. Referring to climate change, van Beurden said that “there’s no other issue with the potential to disrupt our industry on such a deep and fundamental level.” 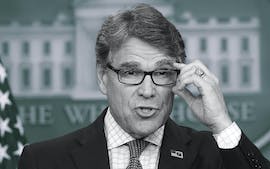