The debate over debates took one of the most unusual turns I’ve ever seen in politics over the past week as U.S. Senator Ted Cruz cancelled a Sunday debate because of a pending vote on Supreme Court nominee Brett Kavanaugh and then tried to reboot the affair when the vote was postponed only to have Democrat Beto O’Rourke turn it down because his dance card had already been filled. And it turned out the event O’Rourke could not get out of was cutting a Facebook Live commercial for his supporters who had gathered for debate watch parties for which there was no debate because O’Rourke had turned it down.

Like most of O’Rourke’s appeals to the general public, the commercial he cut last Sunday instead of debating Cruz was more about an attitude toward politics than specifics on issues: “Now we can be defined by our fears and who we are supposed to be afraid of, or we can be known by our ambitions and our aspirations,” O’Rourke says in the video. “I’m confident that when we see each other not as Democrats or Republicans but as Texans, as Americans, as human beings, there’s no stopping us.” Cruz’s campaign portrayed O’Rourke’s refusal to reboot the debate as frivolous.

The back and forth got me thinking about Facebook as an advertising medium for the campaigns. I previously reported that O’Rourke had paid $4.7 million to Revolution Messaging for social media advertising, and that played a major role in the El Paso congressman’s phenomenal fundraising.  But I really hadn’t spent much time scrutinizing the ads from O’Rourke and Cruz. Television commercials are still how the majority of voters in Texas receive their political messaging, but social media advertising is far less expensive and, like a laser, reaches targeted audiences, while television advertising is more of a shotgun approach coming into the homes of supporters and opponents alike. So I’ve pulled down a sampling of Facebook ads for both O’Rourke and Cruz.

I’ll start with the ad payment for the Facebook Live commercial that replaced the debate. As you can see, the O’Rourke campaign paid somewhere between $1,000 and $5,000 for the ad, and it received between 200,000 and 500,000 impressions. According to Facebook, an impression is the ad showing up on someone’s screen. The Audience breakdown is of the people who saw the ad. When combined, the impressions and audience breakdown give an idea of which users the campaigns targeted to see the ad. We don’t get a total count on the users, but we can see the percentages of the total. As you can see, this O’Rourke ad did better with people in the 18-34 age group, especially young men. 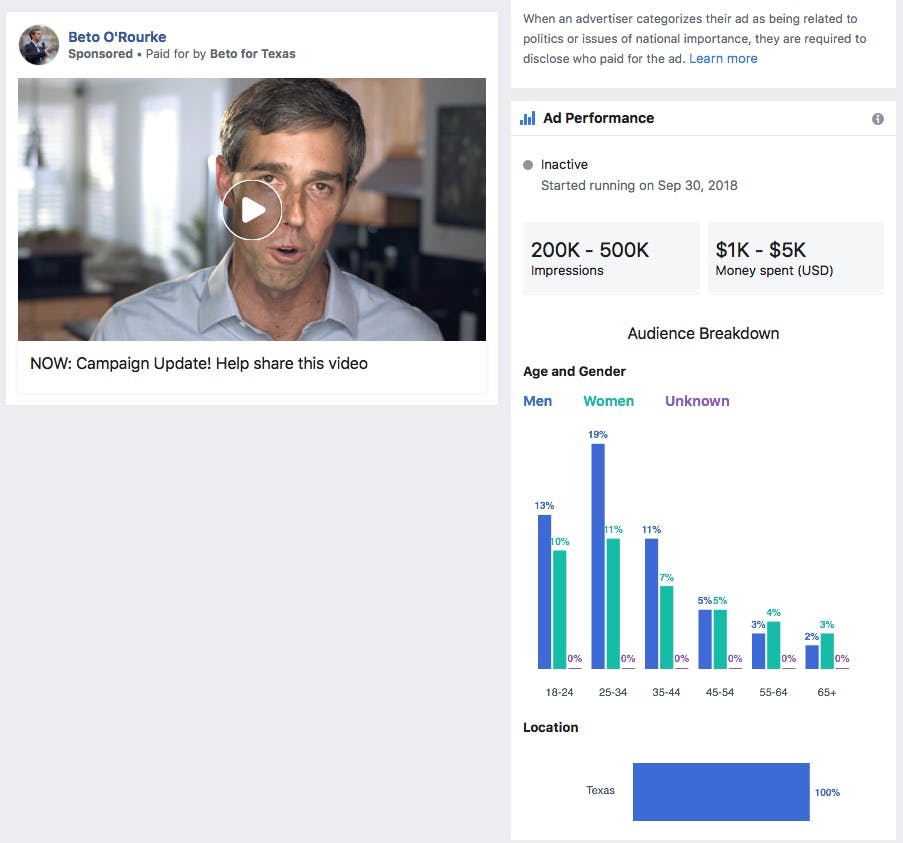 Next, we’re going to get a couple of Facebook ads stemming from the concert O’Rourke had on Saturday with country star Willie Nelson. (While there are multiple versions of this ad, I’ve only uploaded two.) In the first ad, you can see it received as many as 50,000 impressions and played strongest with women in the 25-34 age group. The one that follows was in Spanish. Less money was spent on it, and it had far fewer impressions. But the ad played well across age groups, although women still responded more. 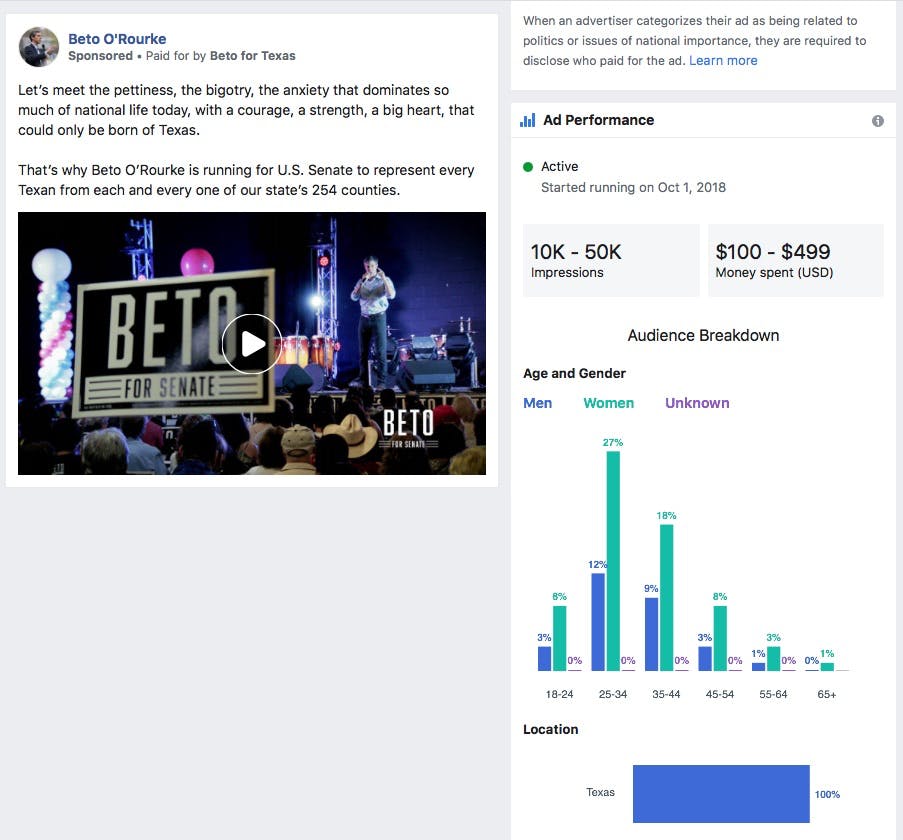 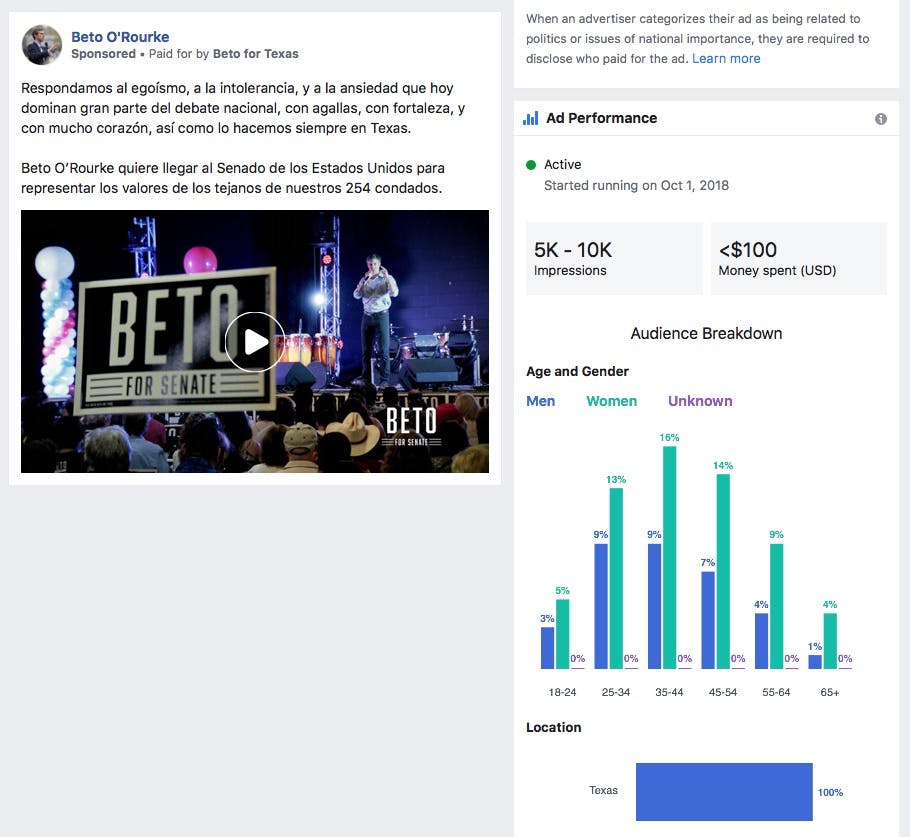 The final one I am going to post from O’Rourke is to demonstrate how his campaign is using different language in the same advertisement to try to draw different readers. This is sometimes referred to as A/B testing to see what works best. 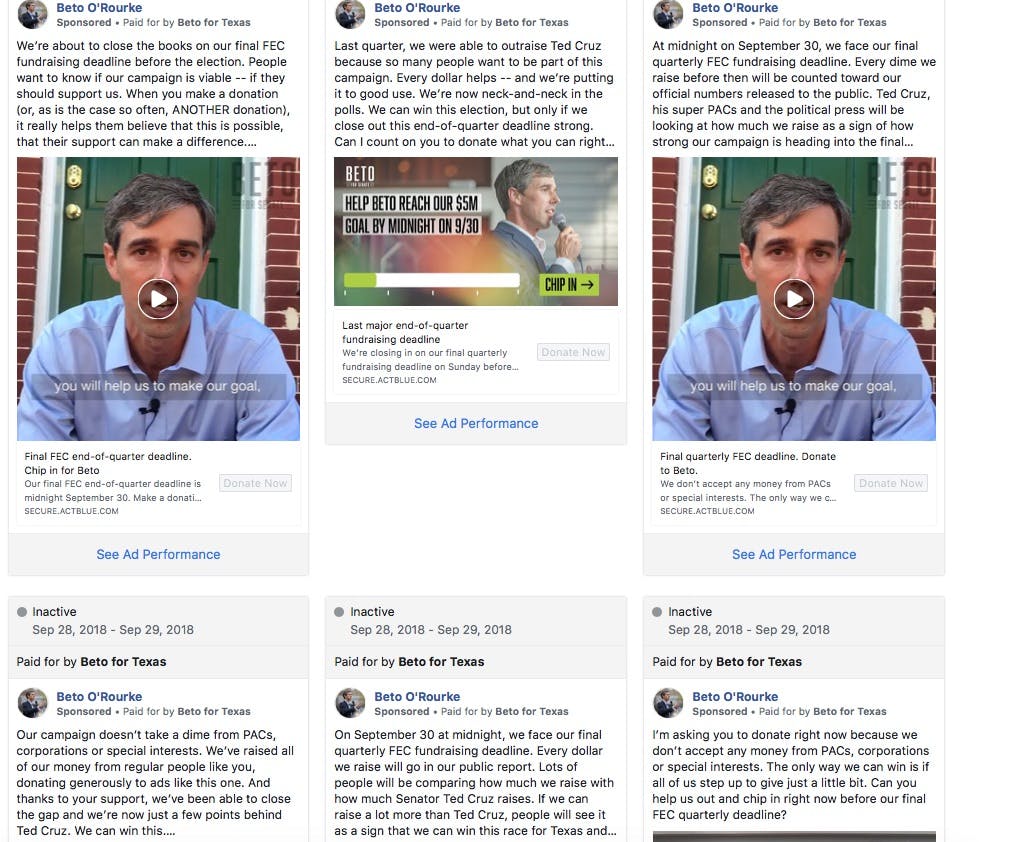 Now, let’s turn to the Cruz Facebook ads. While the O’Rourke ads focus on a message of ending politics as usual, Cruz has focused on ads that paint O’Rourke as a liberal boogyman. Cruz’s ads seek to create a voter distrust of O’Rourke concomitant with stirring up the Republican base vote. Cruz in his campaign speeches has been critical of money O’Rourke has raised from out of state–although Cruz exaggerates the amount by saying O’Rourke has raised tens of millions of dollars from outside Texas. The real number through June 30 was about $4.4 million, with $1.4 million coming in from Californians. As you see, at a cost of $5,000 to $10,000, Cruz bought a million impressions. This ad played best with men, especially young men. The ad also targeted conservatives from other states, including California. 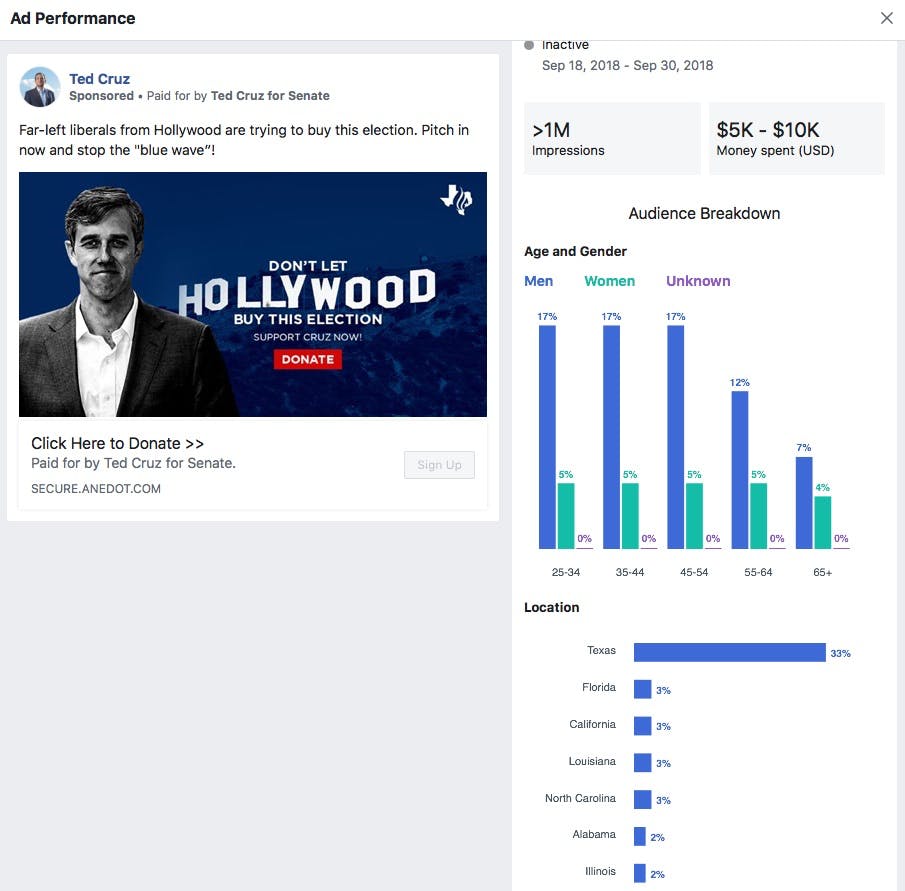 There’s an old saying among Texas Republican political consultants that goes something like: If you want to win rural Texas, concentrate on God, Guns and Country. This ad concentrated on the second part of that saying. I’m not even going to guess why it played better with women. 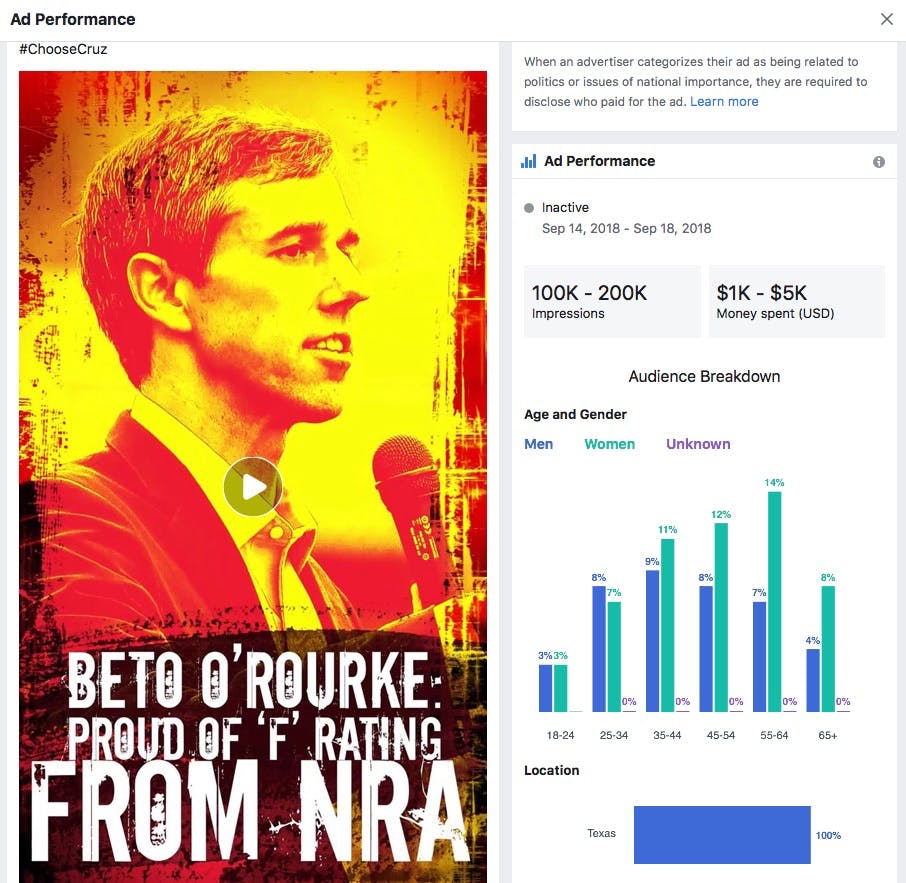 This Cruz Facebook ad is giving a boost to one of his television commercials. After a video went viral of O’Rourke defending the right of National Football League voters to take a knee during the national anthem in protest of police violence against black men, Cruz came back with a commercial featuring a veteran who lost his legs in Vietnam demanding people stand for the anthem because he no longer can.

The Facebook ad got the best response among older women. 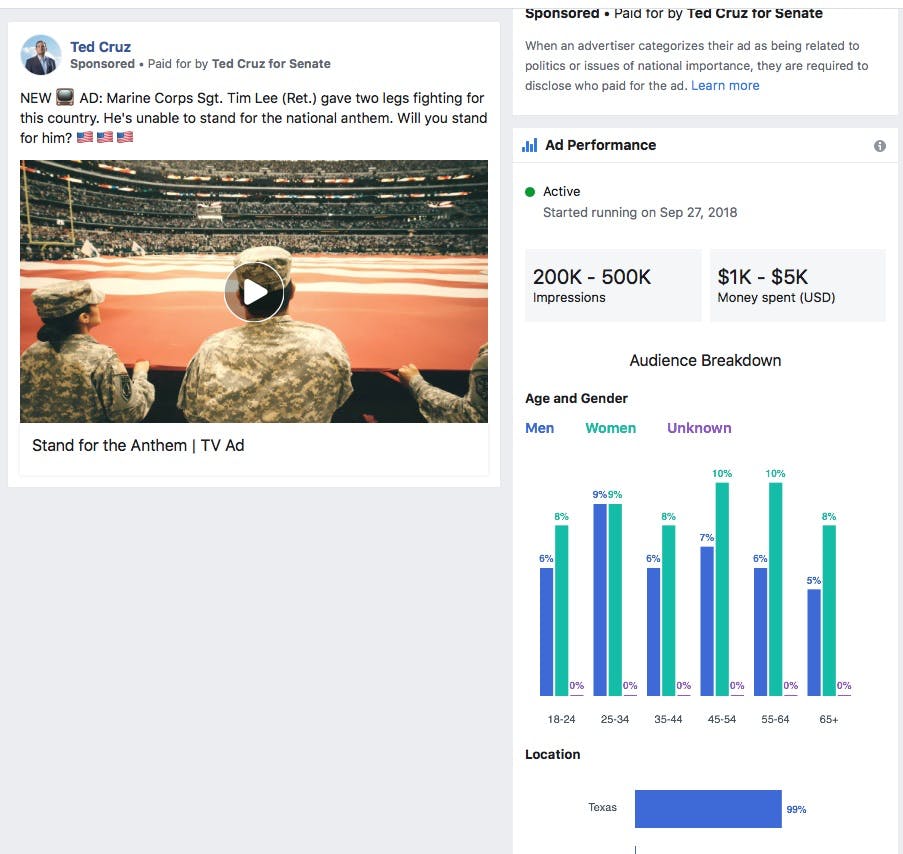 You may be thinking to yourself, “R.G., you biased left-leaning journalist, you’re posting nothing but photos of Beto O’Rourke.” That would be because Cruz’s Facebook ads over the past month have featured more images of Facebook founder Mark Zuckerberg than of Cruz. (The ad questions whether Facebook is censoring content from conservatives.) But just so you know I haven’t completely ignored Cruz: 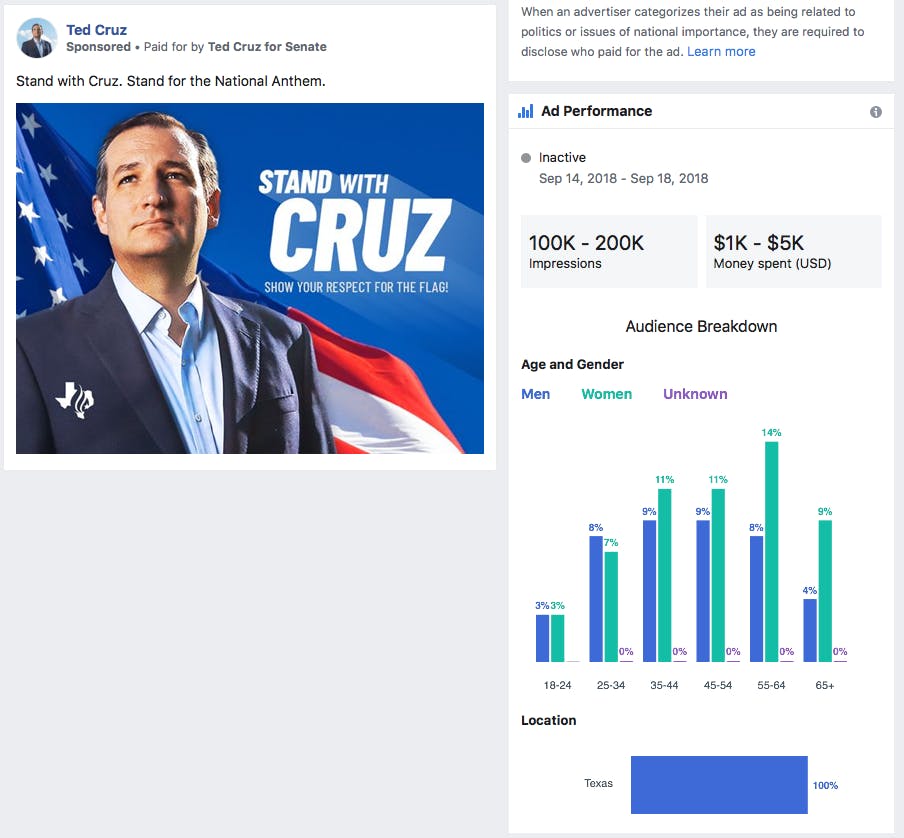 Finally, both O’Rourke and Cruz have used Facebook ads to tout upcoming events. The ads focus on Facebook users who live where the event will be held, although some may have greater reach. Here’s one from Cruz for an event this week in College Station. 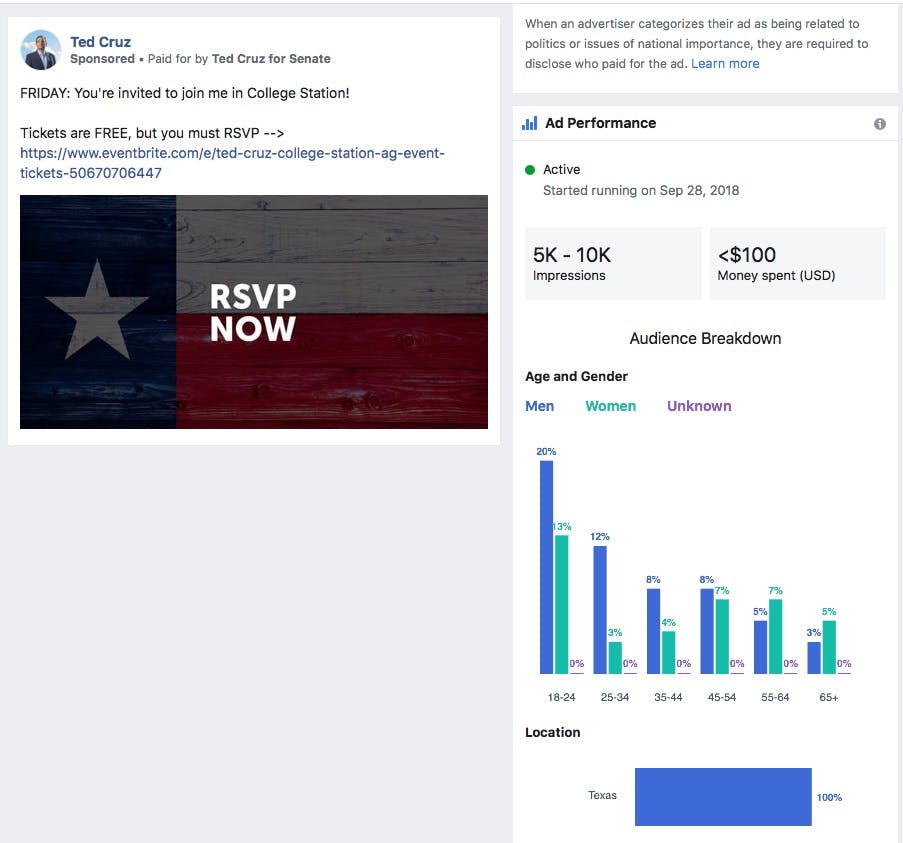 Television remains the main way politicians reach the majority of voters in Texas, a state with just too many people and too much geography to reach individually—even if a candidate has visited all 254 counties as O’Rourke has.

But O’Rourke has set a new standard for using social media advertising. A New York University study that tracked Facebook advertising through July 4, found O’Rourke had spent more than any other candidate in America who faces an election in November. His campaign spent $194,400 to obtain 13 million impressions on Facebook with 377 ads. He was outspent only by two committees that support President Trump. In Google ads, O’Rourke’s campaign came in ninth, mostly behind national political committees. O’Rourke’s campaign paid Google $783,000 for online advertising since May 31 for 78 ads. Cruz’s campaign had spent $125,700 with Google for 25 ads.

Many of the O’Rourke ads on Twitter were similar to the ones he has run on Facebook. I could not find statistics for his total spending on Twitter. However, one recent fundraising appeal jumped out at me because I had not seen it elsewhere. It was called “Fight Back.” And it appealed for money with a tweet: “[email protected] super PAC drops $1.1M against @BetoORourke, group’s biggest round of spending yet: docquery.fc.gov/cgi-bin/forms/ … #txsen.” The Tweet was part of an 11 tweet fundraising campaign that paid Twitter $52,800 to obtain 3.5 million impressions all across the United States. Of note to me, I follow O’Rourke on Twitter. This promoted tweet showed up in the Twitter transparency page for political advertisements but did not show up in my feed from his campaign, indicating that I was not part of the target audience for this promoted Tweet. 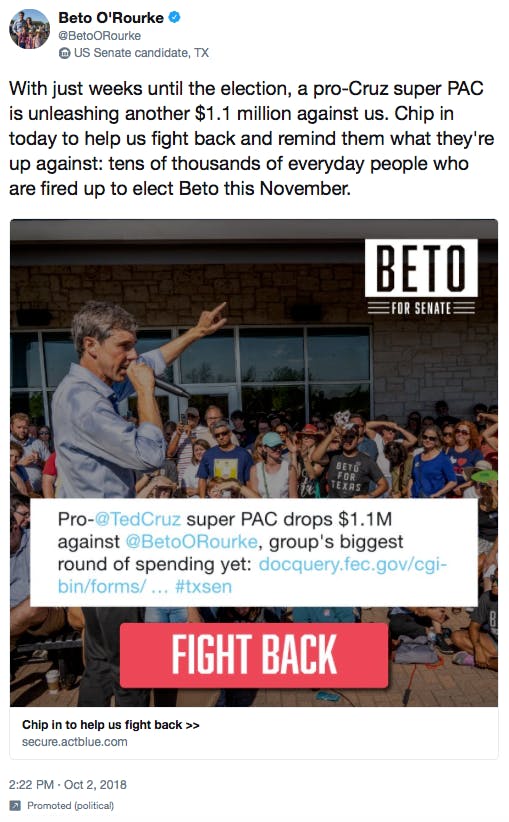 Getting a handle on Cruz’s Tweets was more difficult. The Twitter Ads Transparency  Center showed four Tweets had been deleted for some violation of Twitter policy. The deleted ads linked to the policy, though it did not say what violation had occurred. A single plea for money showed up as a paid promoted Tweet from the Cruz campaign. For that one, the Cruz campaign paid $1,000 and received 92,700 impressions. That’s not to say Cruz is absent on Twitter, just that he’s not paying for the exposure.

Cruz has 3.2 million followers on Twitter, largely as a result of his unsuccessful 2016 campaign for the Republican presidential nomination. O’Rourke has 624,000 followers. On Facebook, Cruz has 1.9 million followers; O’Rourke, 631,671. You can easily see, to get a bang from his social media posts, O’Rourke has much more need to pay to push them than Cruz does.

The new social media transparency grew out of concerns over whether Russian troll farms affected the 2016 U.S. presidential election with false ads meant to further divide American voters during a time of sharp divisions. As Twitter said in announcing its Ads Transparency Center: “We are making it clearer than ever who is advertising US federal political campaign content on Twitter by including a visual badge and disclaimer information on promoted content from certified accounts. This will allow users to easily identify political campaign ads, know who paid for them, and whether it was authorized by a candidate.”

Because of the very nature of social media advertising, it reminds me of my early days of covering political campaigns before there were cell phones or the internet. In 1988, the National Rifle Association ran radio ads in East Texas against Democratic presidential candidate Michael Dukakis claiming he was going to take everyone’s gun away. If you lived in a city, you never heard the ad, but if you drove through East Texas, the commercial played frequently on the radio. TV attack ads that ran in Lubbock might not appear in Houston. Democrats ran commercials on African-American radio stations meant to inflame passions. Consultants debated whether Spanish-language commercials actually prompted people go to the polls. And journalists only saw direct mail advertising—the closest thing to social media advertising—if someone shared an outrageous mailer with them.

ProPublica has developed a web browser plug in to give users the ability to see which ads on Facebook are targeting them and, I suppose, to see what is pointed toward others. This may become a useful tool, but it is dependent on which ads ProPublica chooses to put into the database and whether the nonprofit journalism center will maintain it going forward.

Beto O’Rourke Had a Very Different Type of Political Rally