The controversial dockless bike-share experiment in Dallas has met its symbolic end. After a long saga that saw the car-friendly city resist a bike-share initiative that was deeply flawed from its rollout one year ago, most of the bikes are now off of the streets, as seen in this recent photo of hundreds of bikes stacked at a recycling center in Dallas, which was first reported by KXAS on Sunday:

It was a fitting end for the brightly painted bikes, the scrapyard dumpster overflowing with their twisted metal carcasses. They left this world as they lived in it—uncared for, mostly abused, and entirely unloved. Dallas mayor Mike Rawlings had one word to describe the wasteful image from the recycling center: “terrible.” But the bikes are in a better place now, hopefully, their aluminum ashes soon to be scattered across some distant dump. Dallas’s streets were never their true home.

Several dockless bike-share companies first converged on Dallas last August after promising local officials that their services would come at no cost to taxpayers, and the impact was immediate. The dockless feature allowed bike-share companies to distribute its fleet untethered and controlled by apps. By February, the presence of five bike share companies (VBike, Spin, LimeBike and Beijing-based companies Ofo and Mobike) had transformed Dallas from the largest American city without a bike-share system to the city boasting the largest fleet in North America—a whopping 18,000 bikes, way more than New York City’s 12,000 or Seattle’s 10,000—and Dallas was deemed the “bike-share capital of America” by D Magazine. “Let’s not screw this up,” they warned in February.

But it was clear from the beginning that the program was growing way too big and way too fast. The city reported in February that it had received thousands of comments regarding its dockless bike-share program through its 311 phone number for constiuents, with commenters complaining about bikes that were vandalized, left behind in neighborhoods for extended periods, blocking sidewalks, or mounting in “excessive” numbers. “Some of the bikes are left for days, weeks, or months, in some cases without being moved,” Jared White, who manages alternative transportation in the Dallas Department of Transportation, told CNN in February.

“It’s making people a little bit hostile,” Fran Badgett, the owner of Transit Bicycle Company in Dallas, also told CNN. “From my front door you can see about 200 bikes. Not a single one is parked in a way I’d call respectful or helpful.”

In March, the Wall Street Journal wrote that Dallas was “ground zero for a nascent national bike-share war,” as bike-share companies stormed cities across the country in the past year or so, hoping to capitalize on a booming new business while simultaneously flooding the market beyond sustainability. Companies operating in Washington, D.C. have lost half their fleet due to theft. One dockless company recently pulled out of France, citing the “mass destruction” of its bikes. In China, oversupply led to absurd, mountain-like heaps of discarded bikes. Just a few weeks into its dockless pilot program, New Yorkers are already complaining about dockless bikes requiring maintenance and clogging city sidewalks. Some cities have responded by implementing regulations, like capping the number of bikes that companies can have in the streets, or clearly demarcating curb space designated for dockless bikes.

Rarely have these systems failed with as much gusto as the one in Dallas. It seemed some Dallasites took twisted pleasure in taking individual bikes out of action, using methods that would certainly violate the Geneva Conventions, if it applied to bikes. No cause of death was deemed too degrading for Dallas’s shared two-wheelers. Dallas Morning News photographer Rose Baca documented the disturbing spate of bike killings during a walkabout in January, when she saw the “mangled remains” of bikes along the highway, ghostly bike frames floating beneath the cloudy surface of White Rock Lake, toppled bikes that lay in ditches beside running trails, bikes that had been left in a marsh beneath a bridge, and even one that was deposited in an unreachable spot on top of a billboard. Dallasite Josh Miller created an Instagram account called DallasBikeMess—”chronicling the mess of rental bikes littering Dallas,” according to the account’s bio—which featured photos of bikes wedged into the branches of a tree, discarded in a fountain, shoved into dumpsters, and haphazardly piled by the dozen on street corners.

The bike-share business was so poorly regulated and the public reaction was so overwhelmingly caustic that Dallas’s city council was eventually forced into action, unanimously approving an ordinance in June that requires bike-share companies to pay the city $808 for a permit to operate, plus an additional $21 for each bike in their fleet. The bike companies will now be responsible for responding to 311 complaints of bikes that are blocking sidewalks or have fallen over, too—they have two hours after each complaint to clean up the mess themselves. The council also forced the companies to fork over more specific ridership data to get a better sense of where and when people are riding dockless bikes.

Predictably, the bike-share companies did not take kindly to the news that their unregulated paradise was no more. Within weeks of the city council’s decision, Ofo, Mobike, and Spin all left Dallas completely. Now, only two companies—LimeBike and VBikes—remain, leaving Dallas with just 3,500 dockless bikes, according to the Morning News. Ofo was the only company to directly address the new regulations, telling the Morning News that the city council had taken “a step backward with such exorbitant fees that will drastically reduce access to affordable transportation options.”

While Dallas’s long dockless bike-share nightmare may be over, a new mode of shared transportation may soon take its place—the scooter. According to the Dallas Morning News, the same council vote that effectively curtailed the bike-share explosion also opened the way for motorized scooter companies, which had previously been prohibited in Dallas. The scooters will have to abide by the same regulations that were implemented for the dockless bike-share companies, though, so it remains to be seen if Dallas will experience a similar scooter problem as it did with the overflow of bikes. 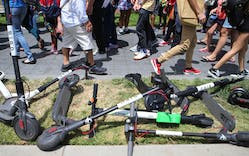 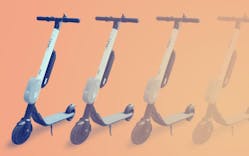