Ron Paul finished last in Florida, and he likely won’t win the Republican presidental nomination, but with the next primary election—actually a caucus, which is significant—in Nevada on Saturday, the Lake Jackson Congressman gets to reclaim his small portion of the spotlight.

Even as Mitt Romney gave his victory speech in Florida on Tuesday, Paul was already in Nevada, where he finished second in 2008.

“We will spend our time in the caucus states,” Paul said to a standing-room-only crowd of some 1,000 supporters in Henderson, Nevada, drawing, as Laura Myers and Lawrence Mower of the Las Vegas Review-Journal reported, “ear-splitting screams” and chants of “”President Paul! President Paul!”

He went on to add, “If you have an irate, tireless minority, you do very well in the caucus state:”

Myers and Mower noted that “Romney and Paul have the deepest campaign organizations in Nevada, whereas [Newt] Gingrich and [Rick] Santorum are just ramping up for a late dash to pick up some of the Silver State’s 28 delegates at stake.”

Carla Marinucci of the Houston Chronicle, who is reporting from Blue Diamond, Nevada, doesn’t come right out and say it, but based on her description of Nevada—”[a] rugged, libertarian-leaning state that’s home to legal brothels, high-roller heaven and a self-proclaimed ‘university’ that teaches pole dancing”—she means to imply that Paul is this state’s kind of candidate.

(And in case we aren’t sure, the Chronicle’s website also re-ran that picture of the Midnight Bunny Ranch girls “Pimpin’ For Paul.”)

Marinucci also noted that “some of Paul’s volunteers from California are coming to help, while Endorse Liberty, a super PAC that supports Paul, announced Tuesday it has raised $3.9 million to bolster his candidacy.”

Overall, as Ryan Murphy of the Texas Tribune reported, Paul has a well-funded campaign. It has raised $13.3 million in the fourth quarter of 2011 (as compared with Rick Perry’s $2.9 million) and $25.3 million total ($23.9 million of which has been spent).

Murphy also noted that Paul continues to rely on grass-roots support, with $7.3 of the $13.3 million coming via donations of less than $200, which don’t have to be itemized by donor.

However, according to Politico, Mitt Romney’s campaign collected $24.3 million in the fourth quarter, and the Restore Our Future Super PAC supporting him brought in another $23.6 million.

Among the donors to Restore Our Future was Houston builder and longtime Rick Perry supporter Bob Perry, with a $500,000 contribution, and Dallas real estate mogul Harlan Crow, who gave $150,000 personally, with another $150,000 coming from Crow Holdings. Bob Perry only gave $100,000 to the Rick Perry-supporting Make Us Great Again Super PAC, as the Tribune‘s Jay Root noted.

The Legacy of Bob Perry 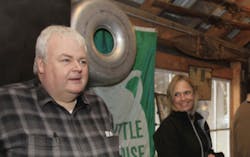