Garcia grew up in the South Texas farming community of Palito Blanco, the eighth of ten children. After earning a law degree from Texas Southern University, she served as a municipal judge, Houston city controller, Harris County commissioner, and state senator before being elected to represent Texas’s Twenty-ninth Congressional District in 2018. She and Veronica Escobar of El Paso, also elected in 2018, are the first two Hispanic women to represent Texas in Congress.

At a press conference in Houston on Friday, Garcia said that being asked to serve as an impeachment manager was “a big honor.” Speaker Pelosi selected the team based largely on courtroom experience, something that clearly worked to the advantage of Garcia, who served five terms as presiding judge of the Houston Municipal Courts, which handle traffic tickets and other minor offenses. Garcia also sits on the House Judiciary Committee, where she participated in impeachment hearings. After her press conference, Garcia sat down with Texas Monthly to discuss the impeachment trial, which continues this week with opening arguments.

Texas Monthly: Where were you when you got the call from Speaker Pelosi?

Sylvia Garcia: I was actually in a Financial Services Committee meeting, and I was told by my staff that the speaker needed to visit with me. So I got pulled out.

TM: What was your reaction to being named an impeachment manager?

TM: Your experience on the House Judiciary Committee clearly helped prepare you for this role. What evidence persuaded you to vote for impeachment?

SG: You know, I didn’t call for impeachment early on. I didn’t get elected to Congress to go impeach the president. I supported the inquiry because I thought it was important that we have the investigation and that we continue to look at the president’s behavior. I read the Mueller Report. But then Ukraine kind of just surfaced—the phone call, the asking for a favor, the quid pro quo. Frankly, it was a big country bullying a little country. I just thought that certainly was an abuse of power, an abuse of his authority. That’s what turned it for me.

In terms of obstruction of Congress, the president ordered our witnesses not to appear. The one or two who did appear before us during the Mueller investigation, they exerted a privilege that didn’t exist, or they answered questions with, “I do not recall.” So the stonewalling, the flagrant disdain and disrespect of Congress that this president has shown, is just awful. If Congress doesn’t have the authority for oversight and the authority of the subpoena, then all presidents will go unchecked. We would have even more of a rogue president. That’s not what the Founding Fathers envisioned.

TM: What would you say to people who don’t feel like they need to pay attention to the trial because it seems foreordained that the president will be acquitted?

SG: Ordinary Americans know what a trial looks like. They know it involves witnesses, they know it involves evidence, they know it involves the opportunity for both sides to be heard. I would hope they tune in just as they would tune into Perry Mason—if they’re older—or one of the shows today. This is about the future of our country. This is about whether we have a president who thinks he’s a king, who thinks he’s above the law and can get away with it. This is about whether we want our vote to count, or whether we want a president who can call a foreign government to help him in the election. This is bigger than us. We’ve got to protect our Constitution, we’ve got to protect our democracy so that we can pass it on to the next generation. The only way to do that is to remove this president and demonstrate that nobody is above the law.

TM: How does it feel to be the only Latina in this group of impeachment managers?

SG: I don’t feel anything different about it. I’m a colleague, I’m a part of the team. I really don’t think about it. For me, I’m an American first, and a Texan second. But you know, this is about our country. All of us are very cognizant of that. We know this is bigger than just us. This is about the future of our democracy. It’s about the president’s behavior, and it’s about making sure we don’t allow that behavior to go unaccounted for, so that it doesn’t set a precedent for any future president to think that under the Constitution he can do whatever he wants. Because no, we don’t have a king in this country. Or that he can undo anything the Congress decides, like if he doesn’t want money to go to Ukraine unless he gets a favor for his personal gain. We have to make sure this president is held accountable. 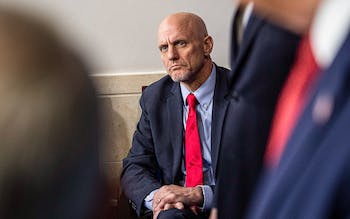