There wasn’t a wardrobe rack, assistant, or makeup artist in sight at the cover shoot for Kacey Musgraves’s latest chart-topping record, Golden Hour. Far from Nashville’s Music Row or the Hollywood Hills, the singer flew into Tyler—the closest airport to her family’s property in Golden, Texas—to meet her sister, photographer Kelly Christine Sutton, for a two-day photo shoot that would eventually produce the image on the front of her fourth studio album.

“When we got together for the photo shoot, we were already past the deadline for when the label needed the final album art. But we always work best under pressure, especially when it’s just the two of us creating together,” Sutton says from her tiny house (see the full house tour here) on the family land in Golden, which Musgraves now owns. This was far from the first creative collaboration for the sisters, who spent their youth singing together in the Buckaroos at the Fort Worth Stockyards on Sundays. Sutton has helped create the album art for each of Musgraves’s records.

Left: Kacey Musgraves did her own hair and makeup for the photoshoot with her sister, Kelly Christine Sutton, a photographer and graphic designer.

Top: The sisters' tools of the trade spread across the dining table at their childhood home in Golden.

They set up basecamp in their childhood home, where Musgraves did her own hair and makeup (“[Kacey] is an incredible makeup artist. I’ve always told her that if this whole music thing doesn’t work out, she has another career option,” Sutton says). From there, they set out for photo shoots on farm roads, under big oak trees, and to the historic downtown Golden, where one of Musgraves’s show-stopping all gold and glitter outfits caused quite the commotion.

For the cover shot, which they saved for last, Musgraves had a vision that her sister admits she was skeptical of at first. “She wanted to use this paper fan, and we are usually on the same page with ideas, but I couldn’t picture it,” Sutton, who also designed the album packaging, recalls. “We went out into this wide open field. We needed one with no trees, so there was sky only. Almost immediately after we reviewed the photos, we just knew we had it. She was the visionary, and I was just the catalyst to getting her there. I love that my sister always stays true to her vision. The photo is really powerful. ”

After wrapping, without Wi-Fi, the duo enjoyed quiet, unplugged evenings and catch up time that’s become less frequent with Musgraves’s busy schedule. The immediate success and buzz around Golden Hour is no surprise to Sutton. “I had a feeling this was going to resonate with people,” she says. “All of her albums have been great, but this one is at a whole other level.” 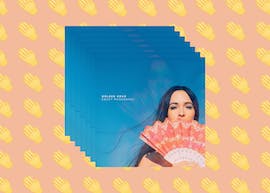 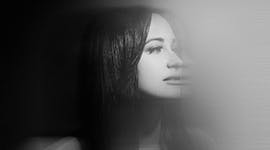