Beto O’Rourke is still reckoning with loss. On Sunday afternoon, five days after he lost his campaign to become Texas’s junior senator, he wrote a sincere, searching letter to his email list. It demonstrated the same sort of “grappling with a tough question” tone that we’ve seen before: the clip that launched him into the national spotlight over the summer—the one which, we learned shortly before the election, involved an operative from the Cruz campaign asking him how he felt about kneeling NFL players. But this time, he let us all know that he’s OK. Really, y’all.

Amy is watching Last of the Mohicans in the other room with the kids. We started it last night after Ulysses’ basketball game. Pizza, carrots, Mohicans and then early to bed.

This morning, before everyone got up, I went on a run with Artemis and then made breakfast. Scones, German pancakes, bacon, eggs, and some bread that Jim and Christine brought by last night with butter and jam on it. Some coffee from beans that a friend in Austin sent to us last week. It’s not Whataburger, but…

After breakfast, we went on a hike in the Franklins with friends and dogs. Glorious morning in El Paso, crisp and clear, you can see for miles at the top of Crazy Cat.

It sounds like a good life—but you don’t need to take his word for it. The rising star politician isn’t just telling people what he’s up to these days, he’s showing them.

Here’s Beto O’Rourke, driving around and eating chips and guac after the election: Here he is cutting flank steak for his family’s dinner, sporting what we hope is the beginning of a David Letterman-style change-of-life beard: 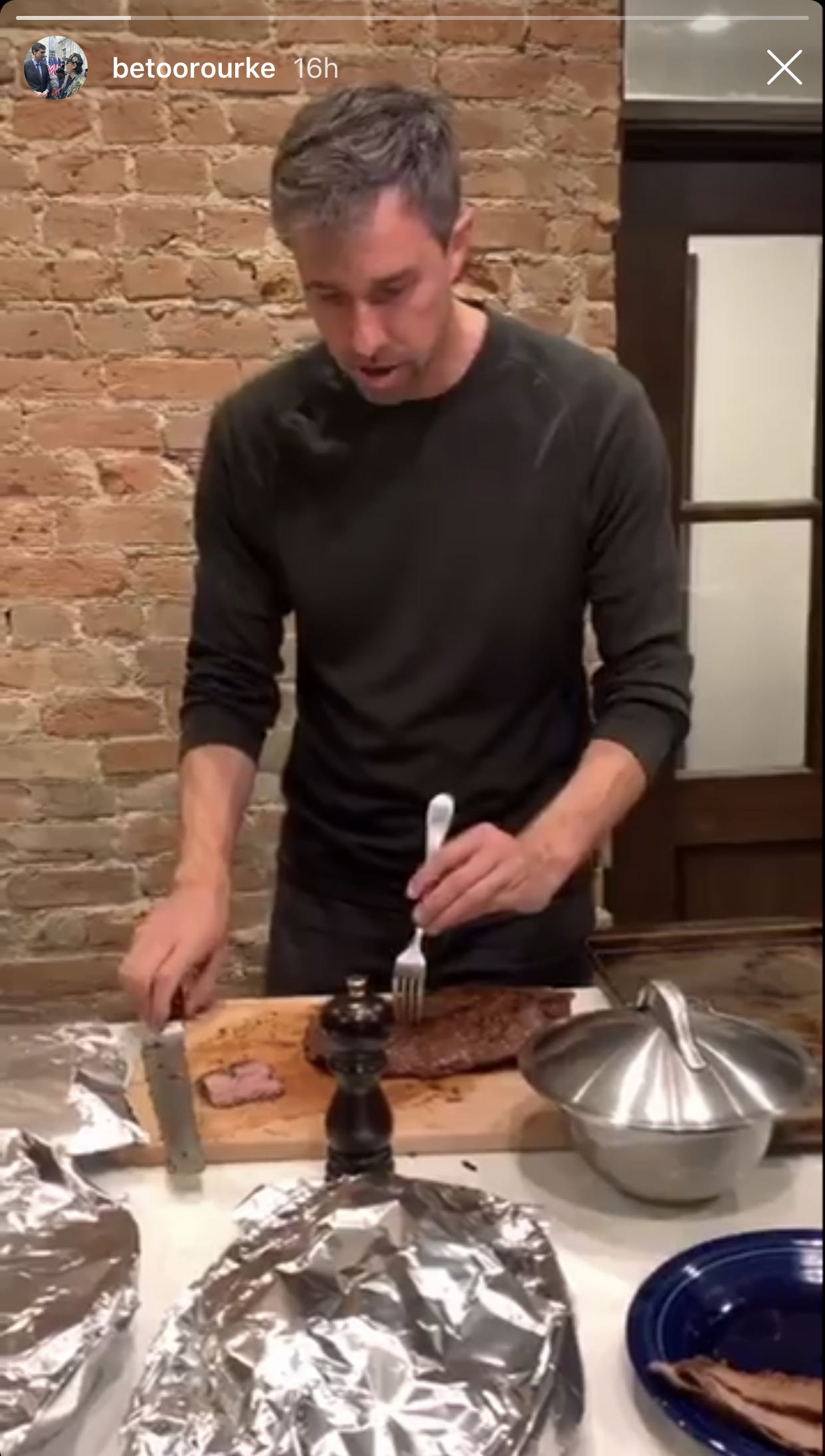 During the Senate race, the relentless livestreaming of the candidate’s activities became a feature of his campaign. Supporters could connect with O’Rourke at their leisure, whether it was the mundanities of campaigning or skateboarding. The Whataburger reference in his letter? Supporters who tuned into Betovision saw him embrace the chain after the “Triple Meat Liberal” slam from his opponent. The campaign staff became characters in a campaign reality show, carried via Facebook Live and watched around the country.

It makes sense that O’Rourke continues to offer up that kind of intimate access to his life, even in defeat. For one, online habits become habitual for a reason, especially on social media. We all enjoy the constant affirmative feedback that comes with being watched/shared/liked; the tech companies that build these things spend a fortune trying to figure out how to make them ever so slightly more appealing and addictive.

But the broadcasting in the wake of his loss also reaffirms the authenticity that drove his campaign. How much of an ordinary guy is Beto O’Rourke? He eats his chips and guacamole while driving, just like you! In the hands of a politician who strained to connect, that sort of thing would come off as cynical and goofy, but for O’Rourke, it mostly just confirms that he’s the same guy his supporters hoped and believed he was. He’ll write a thoughtful letter explaining that “The loss is bitter, and I don’t know that I’ve been able to fully understand it,” and he’ll show you a snippet of his kids playing soccer. They each feel more authentic because of the other.

Of course, another potential motive for continuing Betovision is he’s probably not going anywhere. As Texas Monthly executive editor Mimi Swartz noted in the New York Times last week, Texas has another Senate election in two years (which Texas Politics Project head Jim Henson has pointed out would be against an incumbent with a lower approval rating than Ted Cruz). If he doesn’t challenge Cornyn, there are already the rumblings of a “Draft Beto” movement for the 2020 presidential election, despite his insistence during the campaign that he wasn’t interested in that kind of a run. And if he ends up not being engaged in another race in 2020, the enthusiasm he generated—not to mention his fundraising prowess and donor list—is likely to place him near the top of any VP shortlist.

The very first step toward whatever is next in his political career, though, involves ensuring that he’s still able to connect with supporters, that his national base didn’t dissipate because of those 220,000 votes separating him and Ted Cruz, and that the Beto For Senate yard signs that popped up everywhere from California to Indiana aren’t getting tossed out by dejected Dems. Uploading video of yourself in the kitchen day after day, less than a week removed from a bitter electoral defeat, may not seem like the most conventional way to accomplish that—but everything O’Rourke has done on his unlikely path toward becoming the Democratic Party’s biggest rising star (if not its junior senator from Texas) has been unconventional, intuitive, and about inviting people in. His future is almost assuredly still in politics, but posting #CookingWithBeto videos to Instagram might be what starts him on his path.