Over the course of a near three-decade career, the iconic half-Texan duo Brooks & Dunn have given country music an array of songs that have remained hits in the genre for years. Now, with their eleventh studio album, Reboot, the duo has recruited help to breathe new life into their classics. “Slow Burn” singer Kacey Musgraves was tapped to cover “Neon Moon,” which has become a staple at her concerts. Though she’s often been criticized for straying too far into the pop world, the cover is pure Musgraves—a blend of country with some space cowboy touches that make the song all her own. Later in the album, Austin-based country band Midland tackled “Boot Scootin’ Boogie.” Alongside Brooks & Dunn, the group doesn’t stray too far from the original, delivering a fun, back-and-forth cover of the dance hall staple that they performed live during a recent appearance on The Tonight Show. 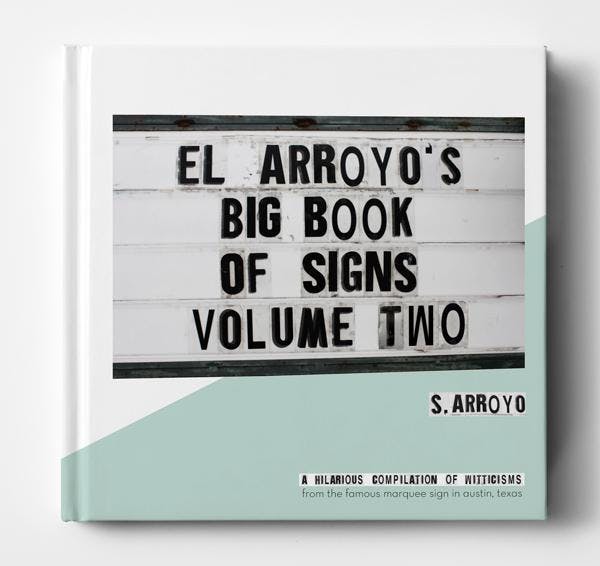 Anyone driving down Austin’s West Fifth Street has seen it. 137,000 people follow it on Instagram. Thousands have its first book sitting on coffee tables or stacked in bookshelves full of other impractical and wonderful information.

For those not living in Austin or who only follow for follow-backs on Instagram, the sign in question is a sarcastic and pun-prone marquee sign changed daily by the staff of Tex-Mex restaurant El Arroyo. In 2017, the owners came out with their first volume documenting the sign’s best work, and it sold out twice. Now they’re back with volume two.

By “now,” I really mean November of 2018, but I was out of the country then and have remained ignorant since. If you’re like me, the book might as well be brand new (it still has prime positioning at BookPeople). And with Easter coming up, it’s a perfect coffee table book for avoiding divisive conversations with relatives, offering statements everyone (or at least every Texan) can get behind: “I get road rage walking behind people,” and “Either you like breakfast tacos or you’re wrong.” The sign also makes a valid point regarding family events themselves: “Wanna feel attacked?? Wear ripped jeans to any family event.” All in all, go buy the book and, for your grandmother’s sake, keep your jeans whole, folks.

“Slow down Babe, don’t want to rush this dream.” Pretty good advice these days. In Abraham Alexander’s new video for “Lovers Game,” the encouragement not to rush moments previously taken for granted settles perfectly in the dreamy slow-motion scenes. Greek-born, Fort Worth–raised Alexander has remarked before that some of his best creative moments come to him behind the wheel. In this video, we ride along in the back seat and witness his meditation as his co-pilot drives through color and light on what could be any given night out in a big city. It’s all about being in the moment, and the soft-focused lights and Alexander’s satin vocals remind you not to focus too hard on the road ahead, but savor in the love of where you are right now. “Lovers Game” is the first single from the upcoming EP, coming out June 28.

The weird and wonderful music of Conlan Nancarrow

I can’t even remember how I came across Conlan Nancarrow’s music, it happened so long ago. But each time I revisit songs like Study for Player Piano No. 37 or the Boogie Woogie Suite, I’m mesmerized. The idea that Nancarrow created music that could not be played by a human being is kind of wild—so is that he did it in Texarkana, a town that also gave birth to Scott Joplin, who changed piano music forever. Did young Nancarrow think about Joplin? Did he see a challenge, like he wanted to change piano music, too? I’ll be honest: I don’t even know that I like this stuff—Boogie Woogie Suite, in particular, always makes me burst out laughing. But I keep returning to it.