Travel a hundred or so miles along Texas backroads, and you will be treated to at least one “what-the-hell-is-that?” moment. Such was the case late last year when I was casing the state for primo dive bars. Because I hate Interstate 35 from Dallas all the way to San Antonio, I had to find someway to get from Dallas to Austin while minimizing its use. So I drove from the Big D to the capital via Cleburne, Gatesville, and Lampasas.

Eighteen miles from Gatesville, in the far southwestern corner of Bosque County, I made a discovery: a crumbling structure that looked like the Alamo on performance enhancing drugs in an obviously dying hamlet called Mosheim. The Alamo has one story, this one had two. The Alamo had just one rounded parapet over the door, but this one had two more on each corner of the building’s frontage.

What the hell was that? Some eccentric’s mansion? A dead bank? A deceased hotel?

I was a bit pressed for time so I didn’t stop, but once the reporting odyssey was over, I looked it up on the Internet. Turns out it was Mosheim’s old K-12 school, and it was, and is, a favorite among Texas ghost town devotees. Architect Bronson Dorsey, webmaster of Lost, Texas, described the structure:

Exterior walls were constructed of structural clay tile and brick, then covered with stucco.  Floors, walls, and roofs were framed with dimensional lumber.  The building’s mission-style design is unique for a country school of that period.  It appears that each of the side wings of the building held three classrooms.  The center two-story section of the building contained classrooms on both floors.

Six or so months after that fly-by I had a chance to go back, but in the meantime I researched the history of the town and the school. It was originally called Live Oak and renamed Mosheim sometime around 1886. (The Scandinavian-sounding name could stem from the fact that this part of Bosque County was home to the state’s greatest concentration of Norwegian settlers; to this day, the nearby town of Clifton bills itself as “The Norwegian Capital of Texas.”)

According to online articles from The Clifton Record, the school was designed in the roaring twenties and scheduled to be dedicated on December 5, 1930, just as the Depression was deepening over the country. Mosheimers were supposed to celebrate all weekend long, with bands; boys and girls basketball games featuring their Hawks against the Fives from nearby Morgan; physical education demonstrations; speeches by the architect, contractor, and superintendent of schools; and two plays, each less politically correct than the other. One of these dramas—The Fortunate Calamity—was described as “a gripping story illustrating practical life” and starred poor Miss Gladys Anderson as “just a plain girl.” That production was supposed to be followed by “a Negro comedy which bring a laugh from the most serious.” (Bad weather forced the big weekend to December 12; it’s unclear how many of these festivities took wound up taking place.)

Ominous start or no, hopes were high—over the next few years, students and faculty alike would praise the school’s “progressive” educational methods and its “new and modern” building, where the “seven classrooms, study hall, auditorium, library, book depository, lavatories, and superintendent’s office” would “meet the needs of Mosheim’s future citizens” and enable teachers to train “the boys and girls who will make the America of tomorrow .” “Mosheim people are justly proud of their new building,” noted the Record.

Those future citizens never came in any large numbers. According to the Texas State Historical Association, Mosheim’s population peaked at about 200 in 1941, and I couldn’t find a record of a graduating class of more than nine students.

It’s hard to tell when the school closed its doors for good, but in 1956 its 108 K-12 students placed it dead last for student population in Bosque County, and in 1960, the nine total high school students were dispersed to nearby high schools so the school could focus its dwindling resources on grades K-8. By 1969, the building seemed to be functioning as a community center, hosting events like a “fun night,” where visitors were encouraged to “bring a friend, cards or dominoes, and enjoy the evening.”

Today, Mosheim’s population is estimated at about fifty, and the only hits you find in newspaper databases dated after 1970 for the Mosheim school are citations in obituaries of former students. The school itself is returning to dust, more dramatically than ever. The Mosheim school now more closely resembles the humpless Alamo of 1836 than the one we know and revere today. That magnificent central parapet that once crowned the building is now lying in heaps, just inside and outside what remains of the the Spanish-style doorway. 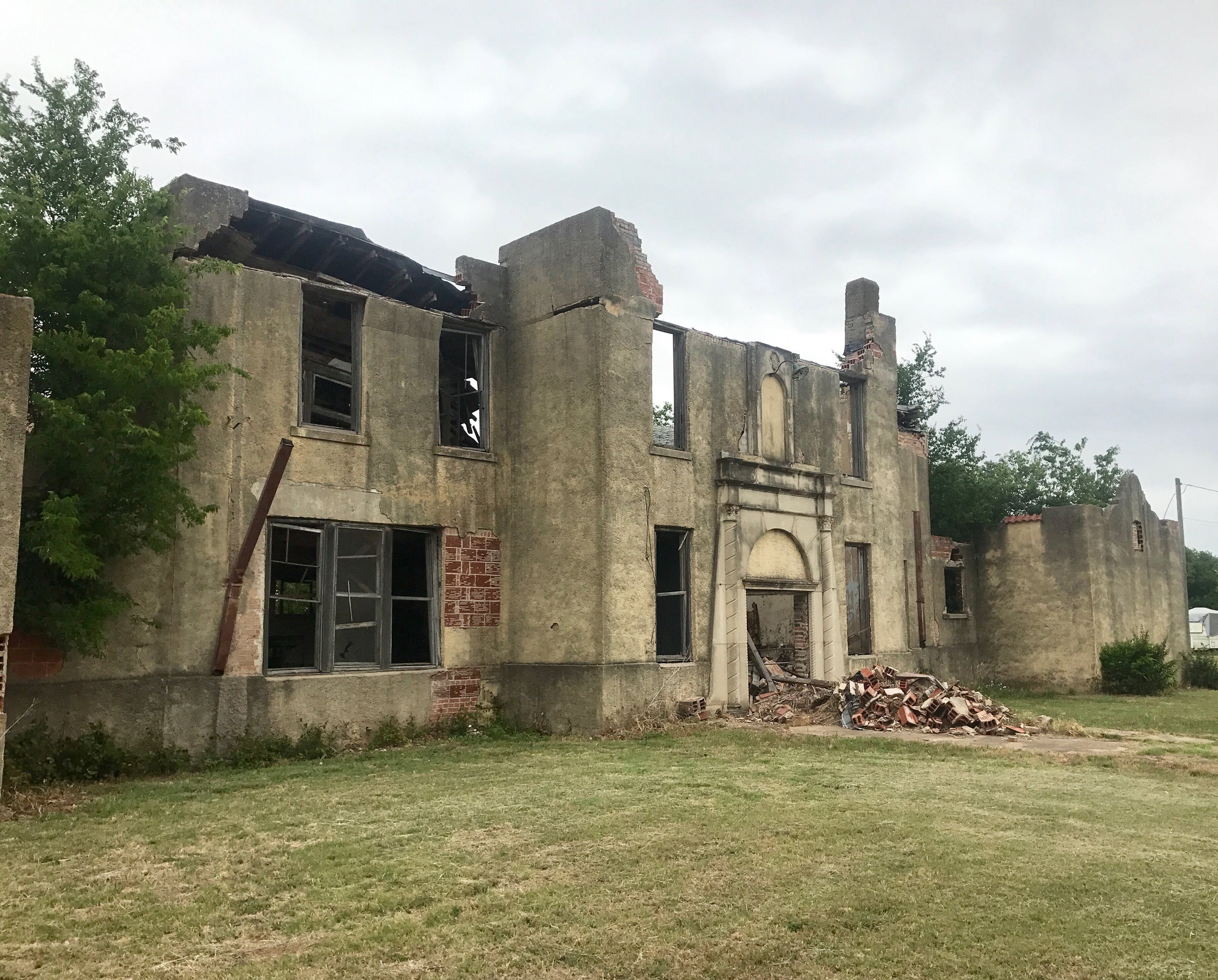 As a rooster or two crowed nearby, and a man mowed on his lawn on a tractor a couple of houses down, I explored the grounds and braved a trip inside, picking my way over nail-studded boards and fallen pressed-metal ceiling tiles. 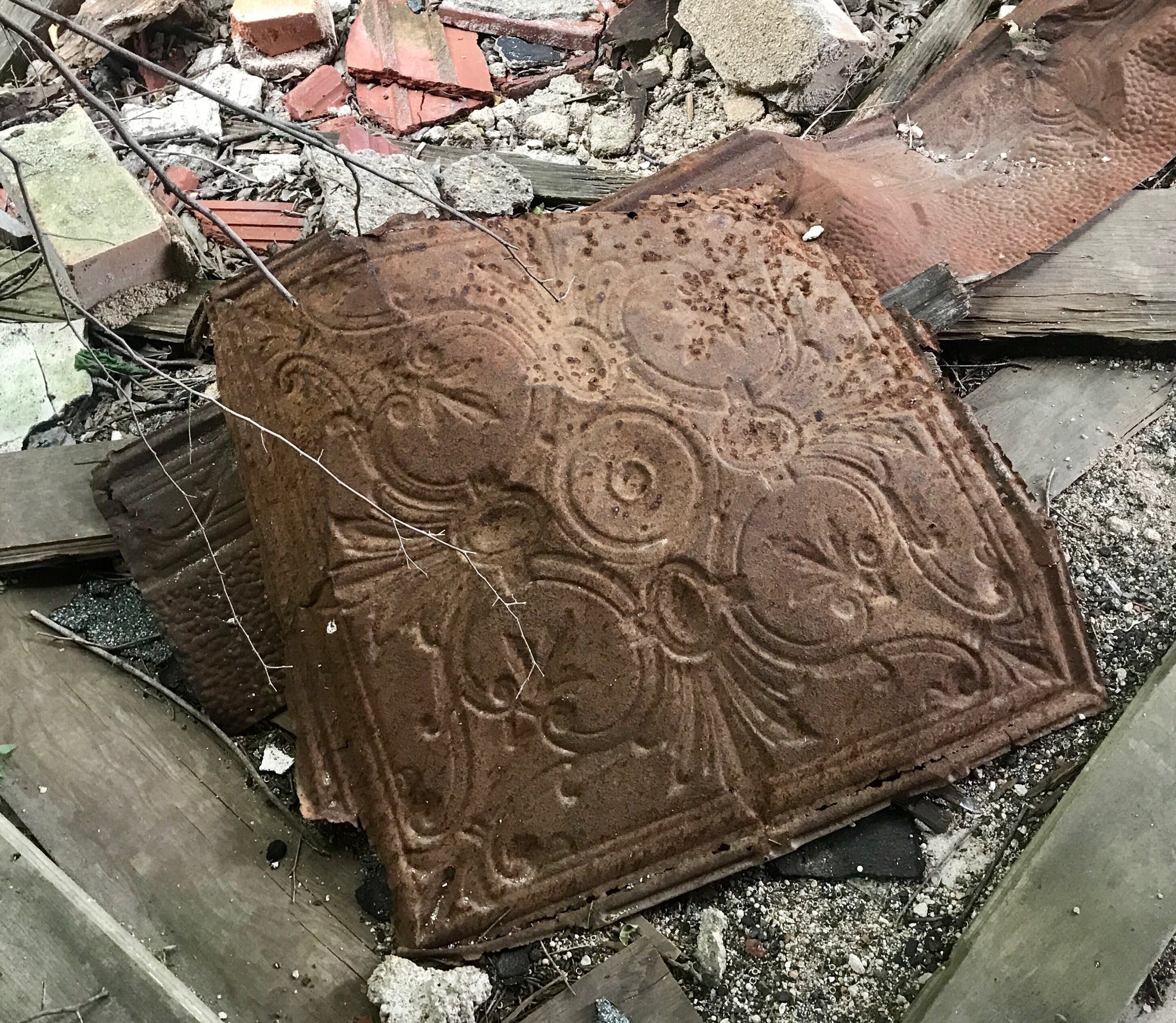 More than once, I wondered where the money had come from to build this place, and why old-time Mosheimers once believed that hordes of kids would some day attend this school. Oddly, even though the country was a year deep into financial calamity, newspapers of the day don’t even mention their extravagance and optimism. (Nor did any note its resemblance to the Alamo.)

Miraculously, some of that old-time pride lives on. Most of the old classroom walls are tagged with graffiti, but it’s not the profanity you’d expect. Instead, you find spray-painted motivational quotes declaring things such as “Open your mind before your mouth” and another one, touchingly, simply states “Beauty in the forgotten.” 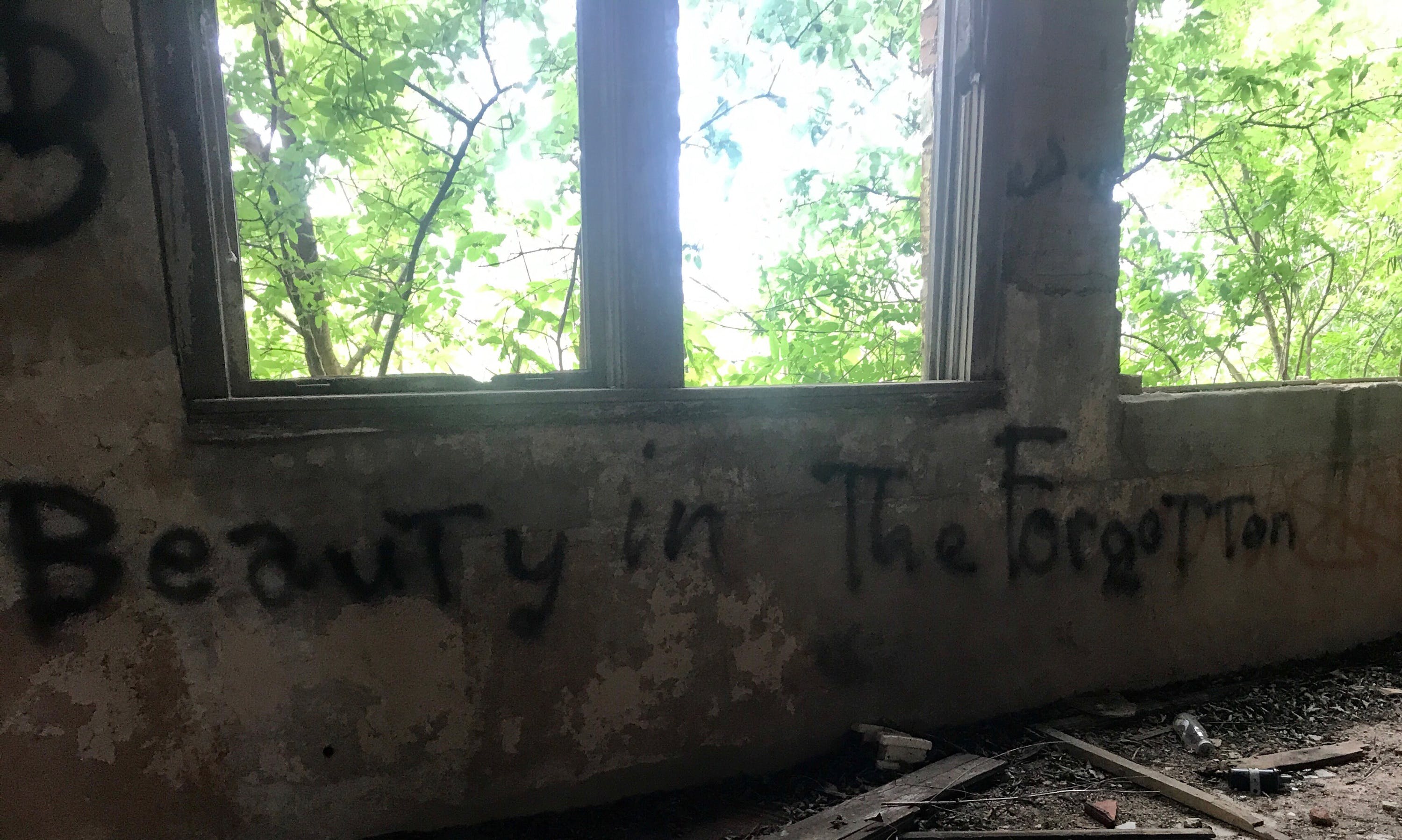 So the spirit of the Hawks lives on!

Or maybe not, or at least not for very much longer. As I was leaving, I took one last look back at the ruins of the old pride of Mosheim, and I noticed a solitary vulture perched next to where that wonderful reminder of Texan defiance had presided for over eighty years. 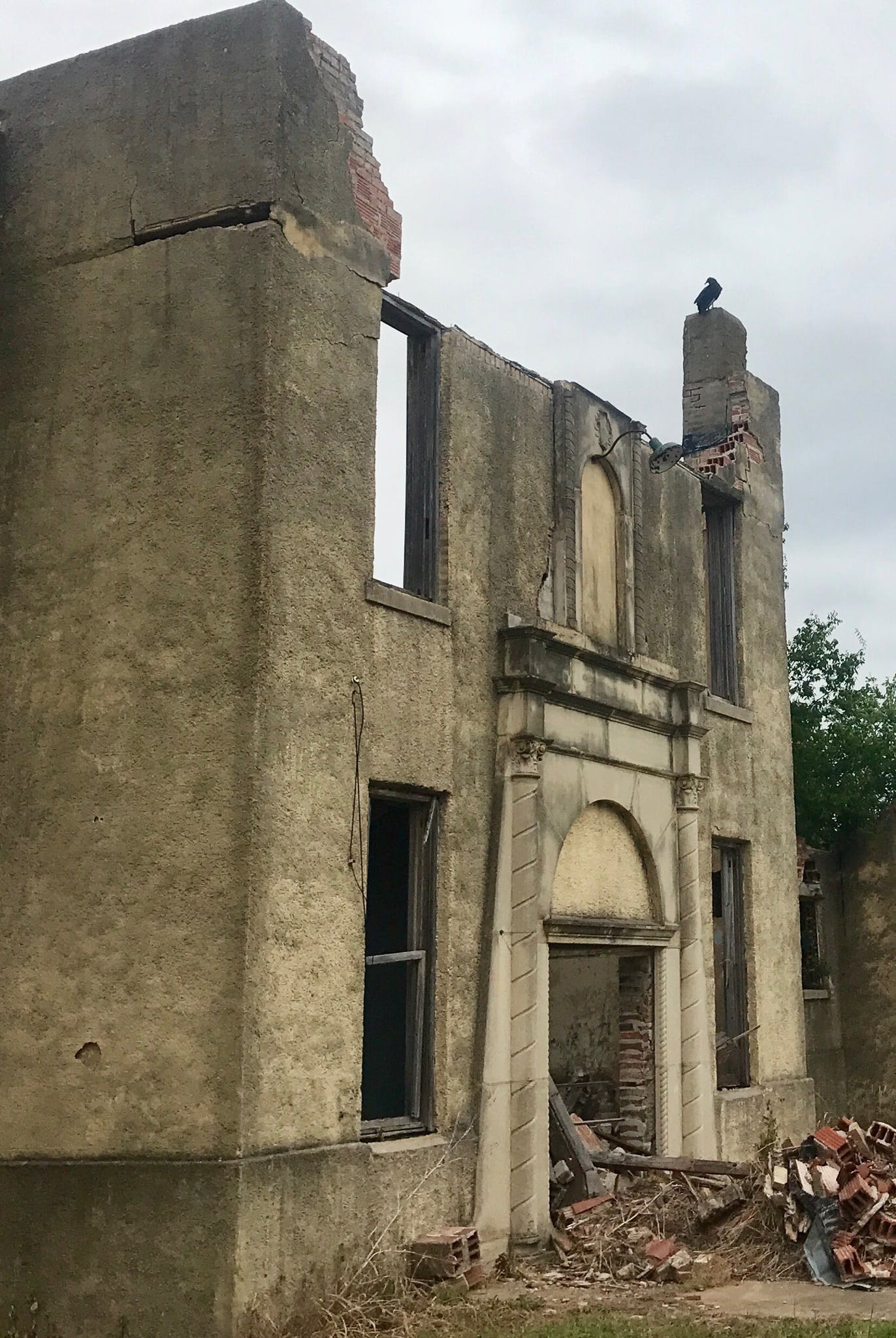 By Henry Camargo, as told to Katy Vine