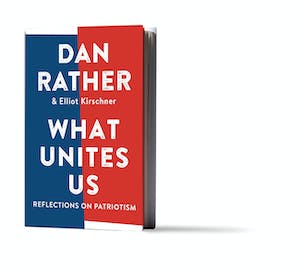 round 1940, when Dan Rather was an eight-year-old boy growing up in Houston, his father, a ditch digger, purchased a well-worn and rusted-out 1938 Oldsmobile. As the Fourth of July rolled around, Rather’s mom had the notion to take a family road trip to Galveston to watch the fireworks over the Gulf of Mexico. The family piled into the jalopy and set off along the two-lane coastal road, windows down, the air thick with heat and humidity.

En route, Rather’s mom led sing-alongs to treasured state songs like “Texas, Our Texas,” “Beautiful Texas,” and “The Yellow Rose of Texas.” They also joined together on tunes befitting the holiday: “America the Beautiful” and “The Star-Spangled Banner.” As they intoned the national anthem, though, they debated whether to stop the car so they could get out and stand. At the time, the U.S. was coming out of the Great Depression and, as World War II would prove, unity was one of the country’s greatest assets. The Rathers ultimately decided to stay on the road, but they still placed their hands over their hearts as they sang.

The anecdote, which Rather shares in his new book, What Unites Us: Reflections on Patriotism (out November 7), is even more relevant now than when he started writing it early this year. At a rally in September, President Trump called on NFL owners to fire players who knelt during the national anthem, and players across the league responded with coordinated anthem protests. More recently, nearly all of the Houston Texans kneeled to protest after team owner Bob McNair reportedly compared them to “inmates.” Detractors have condemned the players’ actions as deeply unpatriotic, while supporters consider them to be literal acts of patriotism.

That debates about patriotism are serving to divide, rather than unite, is part of a much larger problem, Rather told me, and it’s precisely what inspired him to pen the book. While he wouldn’t choose to kneel during the national anthem himself, he respects the players’ decision to protest as long as they’re non-violent. “The freedom to dissent is a very important part of our founding and our history,” Rather said. “Frankly, a deep and important part of being an American is to understand that people have a right to dissent.”

What Unites Us, a collection of essays, is Rather’s eighth book. The pieces explore the steadfast values that bind the country together, but they began more humbly, as a series of Facebook posts for his media company, News & Guts. His colleague Elliot Kirschner encouraged Rather’s initial foray into social media, which led to Kirschner co-authoring the book. Rather, who turned 86 on Halloween, started formally writing What Unites Us in February, and several big publishers turned it down in the following months, he said, because they thought he was in too much of a hurry. “‘Wait until next year,’ they said, Well, as the old line goes, ‘I’ve reached the stage where I don’t even buy green bananas’—never mind thinking about writing a book next year.”

Most urgent was his concern about the increasing conflation of patriotism and nationalism. Rather argues that people unwittingly use the terms interchangeably, but it’s important to distinguish their meanings. Patriotism, he says, requires revering your country but also being open-minded about its imperfections and, in turn, striving to correct them. Nationalism, meanwhile, tends to shut down dialogue because it stakes a claim to moral and cultural superiority.

“There is a school of thought among many powerful people in the country now that to be a patriot you have to be deep into nationalism, and as we would say in Texas: bullshit,” said Rather, a part-time Austinite. “The idea of a kind of mega-nationalism is part of what’s leading to our deep division along tribal and ideological lines. That’s a danger for a big, diverse country such as ours. If we ever descend completely into tribalism, then we’re through as a country as we’ve known it.”

In early October, I met Rather in the green room at the Belo Center for New Media at the University of Texas at Austin. The occasion had him in a contemplative mood. The program, called “Breaking News from Notebook to Facebook,” brought in several of Rather’s former colleagues to discuss his legacy, followed by a talk with Rather. In addition, the university’s Dolph Briscoe Center for American History debuted a career-spanning online archive some three years in the making, called “Dan Rather: American Journalist.”

The archive draws from more than two dozen news media and photojournalism collections across the country, and it joins a media history collection at the Briscoe Center that includes many of Rather’s old CBS colleagues, including Walter Cronkite, his journalistic idol.

The challenge of curating the massive archive, which includes some 500 video clips and 2,000 digitized documents, fell to Christelle Le Faucheur. Le Faucheur, a French native, had just earned her PhD in history at UT when the Briscoe Center posted the job. The description called for someone to oversee a news history project, but there was no mention of Dan Rather. That disclosure wouldn’t have mattered anyway. Le Faucheur admitted not knowing much about Rather, or CBS for that matter, but to her that was an advantage because she wanted to approach Rather as a historical subject.

“I was struck by the different types of things he had done, and how people often remember him for one thing, as an anchorman, or for the Saddam interview, or for the Abu Ghraib story,” she said. “But often they don’t know, or are not as aware of, the other things he did.” For instance: his on-the-ground reporting during wars and natural disasters, his coverage of presidential elections, and his investigative stories on topics like abortion, guns, and AIDS.

As I sat down with Rather prior to the program, he introduced me to his grandson, Martin, who played a vital role in shaping What Unites Us. Rather actually dedicated the book to him, along with his other grandson, Andy. Rather has tried to imbue in his family the importance of public service as a way of giving back to the country, something he accomplished by bringing people the news of the world. Martin, an aspiring journalist, is following suit, while Andy is training to be an EMS responder.

Rather has thought a lot about what kind of world he hopes to leave them. In July, his book deadline looming, he embarked on a road trip much like his family took when he was a kid. Only this time, it was just he and Martin. They started in Dallas and finished in South Dakota, where Martin glimpsed Mt. Rushmore for the first time. Along the way, they talked a lot about what patriotism is and isn’t.

“We’re still a young country, in terms of the sweep of history,” Rather said. “When we started, most of the world—and still much of the world—just didn’t think it could end well because, they said, you can’t have a country with so many different races, religions, creeds, and ethnic backgrounds that can stand united. Well, here we are working on three hundred years later, and we’re still together. We have a great country, we have a united country. The question is: Can we keep it?”