Judging by the holiday rush, pets on planes are no longer an anomaly. Although fur-friendly skies can be a relief to people who would have otherwise had to leave pets behind, not everyone is excited about the shift. Aside from being a source of consternation to those who prefer their flights free of fur, barking, and bulky pet carriers, a specific type of traveling companion—emotional support animals (ESA)—could be potentially harmful for those who have long relied on service animals.

A Texas company is at the heart of this crush of ESA pets on planes, part of a spate of businesses offering ESA letters to allow pets to fly with their owners. CertaPet, headquartered in League City, believes it is offering a valuable service: issuing letters that state a person would benefit from an ESA, which the company says can help people suffering with anxiety. “We think of ourselves as a tele-health company,” says Haley Neidich, a licensed clinical social worker and the director of clinical development for CertaPet. Neidich says that CertaPet contracts with about 40 licensed therapists around the country, some licensed in multiple states, who provide an ESA letter to customers after they fill out a questionnaire, briefly speak with a therapist, and pay between $150 and $200. According to Neidich, the company’s goal is to provide customers with a “starting point for a relationship with a therapist.”

But to animal therapy professionals, the ESA letter business is a poor substitute for a health professional, and confuses people about what it means to have an ESA. “Please know that those are scams,” Cynthia Chandler, a professor of counseling and higher education and the director of Consortium for Animal Assisted Therapy at the University North Texas, says of such companies. “[People] are just paying strangers for a piece of paper.”

Chandler, a licensed counselor who works with therapy animals, says people often confuse service animals, therapy animals, and ESAs. ESAs have no training, registration, or certification, but service dogs—which are trained to perform specific tasks for disabled people, including opening doors and taking out laundry—receive intense and costly training for around eighteen months. Therapy animals also receive training, in order to sense and alert therapists about a patient’s emotional state. Service dogs and therapy animals both require a calm temperament and an ability to handle different people in a variety of situations and environments—ESAs require neither, nor training of any kind.

According to Chandler, an ESA letter doesn’t actually specify a particular animal at all, since therapists and doctors, unlike veterinarians, aren’t qualified to evaluate animals. Rather, an ESA letter serves as a recommendation from a health professional that an individual has certain mental or emotional needs and could benefit from having an ESA.

Under the Fair Housing Act and the Air Carrier Access Act, an ESA letter legally admits dogs in no-pet homes and on airplanes—but only service dogs are legally allowed in other public spaces, like restaurants or grocery stores. (The Americans with Disabilities Act gives service dogs public access to accompany their handlers everywhere.) This can create problems when people get an ESA letter, buy an identifying vest or patch from an online retailer, and treat their untrained pets as qualified service animals. “People will get a prescription from their doctor saying that they need the dog for emotional support and then all of sudden they’re taking their dog to H-E-B and everywhere that they go and that’s not the law,” says Debi Krakar, the executive director of The Dog Alliance, a Cedar Park-based non-profit that trains service dogs. “I don’t think that people totally understand that public access service dogs need to be trained for public access.”

Krakar says the potential for attacks and the possibility that an ESA could interfere with a service dog or their handler are her biggest concerns about ESAs. In June, a passenger on a Delta Air Lines flight from San Diego to Atlanta was attacked by an emotional support dog, a type of incident that Krakar says can “take what’s supposed to be a positive thing . . . and turn it into something that they’re fearful of.”

Chandler believes that the misuse of ESA letters for “untrained, unruly, unclean pets that are just emotional support animals” creates a bad reputation that spreads to people with service dogs. “One of the things that people who have service animals are afraid of—and I’m afraid of with therapy dogs—is that the abuse or lack of understanding about emotional support animals will start causing some contaminated thinking about therapy animals and about service dogs,” she says.

Those misconceptions are reinforced through language used to advertise for sites like CertaPet. A blog post that leads to CertaPet’s website states that ESAs are a “subset of service animals that qualify for the same non-discrimination rules” as “seeing eye dogs with cute little vests.” Neidich acknowledges that the spread of misinformation about emotional support animals is a valid criticism of websites that provide ESA letters, but denies that CertaPet plays that role. In an email, she wrote that CertaPet works with affiliate marketers and that the company tries “to keep them in line in terms of messaging, but they can occasionally go off-message, as they have done here in this case,” adding that she was working to get the content changed.

Claiming that an ESA is a service dog is also illegal. Although the ADA doesn’t punish people who make false claims that a dog is a service animal, Texas law classifies it as a misdemeanor with a fine up to $300 and community service at a place that serves people with disabilities. So beyond creating concerns for those who rely on service animals, if you use the letter to bring your pet into the grocery store, it can cause trouble for you too. 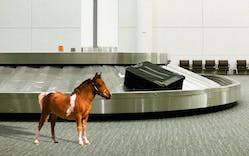