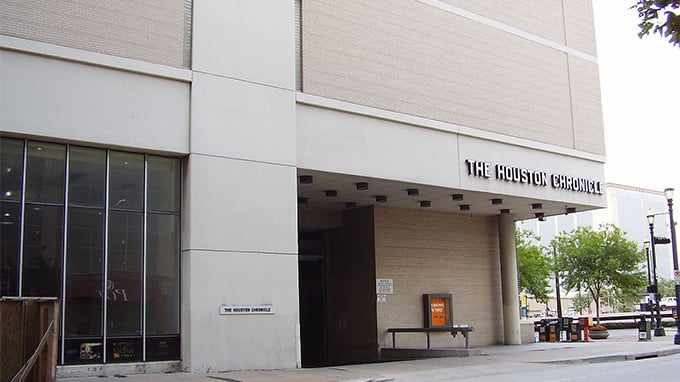 In a short post on Monday, the Houston Chronicle revisited the death of Lacey Smarr, a Longview teenager who died a month ago from complications related to an eating disorder. It’s a tragic story that’s making its way back through the news cycle after the teenager’s mother, Candy Miller, announced she would be starting the Lacey Foundation—an organization to help “raise awareness of the signs and symptoms of anorexia, bulimia and other eating disorders as well as offer resources to families in need.”

The post itself is fine, if a little sparse. It’s nothing more than a simple aggregation of information presented in a piece in the Longview News-Journal, which broke the story on Sunday. As far as aggregatory Internet journalism goes, it works. But the accompanying slide show of seven photos taken from Smarr’s Facebook page is where the Chronicle went terribly wrong.

This is how the caption underneath the article’s main image, which shows a mirror selfie posted by Smarr on December 5, 2014, reads:

Lacey Smarr died weighing just 88 pounds after a months-long battle with an eating disorder that left her nutrient-starved. See out [sic] slideshow of photos from the girl’s Facebook page to witness her fatal transformation.

There certainly are times when a slide show can enrich a story, which the Houston Chronicle’s web editors and reporters must know, because almost every post on the newspaper’s free site, Chron.com, includes a slide show of some kind. (They don’t feature so many slide shows on their more slickly designed paid site, HoustonChronicle.com, which is less reliant on clicks.) There are also times in which a slide show isn’t useful, or is incredibly insensitive or inappropriate, like when it’s used to document a teenager’s struggle with an eating disorder. Inviting readers to gawk at Smarr’s “fatal transformation” is both callous and classless and does not serve any productive purpose. What are readers intended to think as they look at these images?

From the outside, it’s unclear how the slide show sausage gets made at the Chronicle, but this kind of language is something an editor should have caught. The Houston Chronicle is the largest daily newspaper in the state and has a generally good reputation for producing quality pieces of reporting and journalism. But that doesn’t mean the newspaper is incapable of making mistakes.