Although we trail such medieval wonderlands as Spain, Bavaria, and Wales in castles per square mile, Texas is studded with an apparently growing number of these crenellated, turreted strongholds, ranging from the kitschy to the magnificent.

We’ll get to some modern marvels later, but first we have to look at the first wave of Lone Star castles, which were more about function than fantasy.

In Victorian times it was faddish to literally hold court in mock castles, and today you can find such vaguely Arthurian monuments to law and order looming over county seat squares in Dallas (“Old Red,” now a museum), Sulphur Springs, Decatur, and in Center, where the courthouse stands proudly as “America’s only Irish-style castle courthouse.” (And the only one where the judge’s bench is equipped with a trapdoor to enable swift exits to chambers, a wise amenity for a judge presiding over hot-headed and well-armed Shelby County, a jurisdiction that once had its very own war.)

Fortifying these courthouses might well have been more than a decorative choice, for, as frustrated modern-day genealogists and historians know all-too-well, arson was once an all-too-common practice. Law closing in on you? Have they got a big paper trail piled up in evidence? Just hire a guy to break in on a moonless night, kick over a few lanterns, and burn the whole place down. Voilà: there goes the state’s case, and all other county records to boot.

You read variants of that story in county after county, sometimes more than once in the same town — “courthouse burned, arson suspected, records destroyed, person believed responsible never charged.” At any rate, officials stopped building wooden courthouses, replaced them with those stone and brick fortresses, hired round-the-clock guards, and equipped the buildings with fire-proof storage vaults for evidence and records.

Thin on the ground elsewhere in the state, castle-courts seemed to have been a Northeast Texas thing, but there are castle-like former jails (both now museums) in Bellville (just northwest of Houston) and in the West Texas town of Brownwood. Such buildings were designed to “project authority, power, and endurance – traits meant to discourage scofflaws and criminals from perpetrating unlawful infringements and crimes throughout the region.”

You see that fourth tower rising above the other three on Bellville’s old jail? 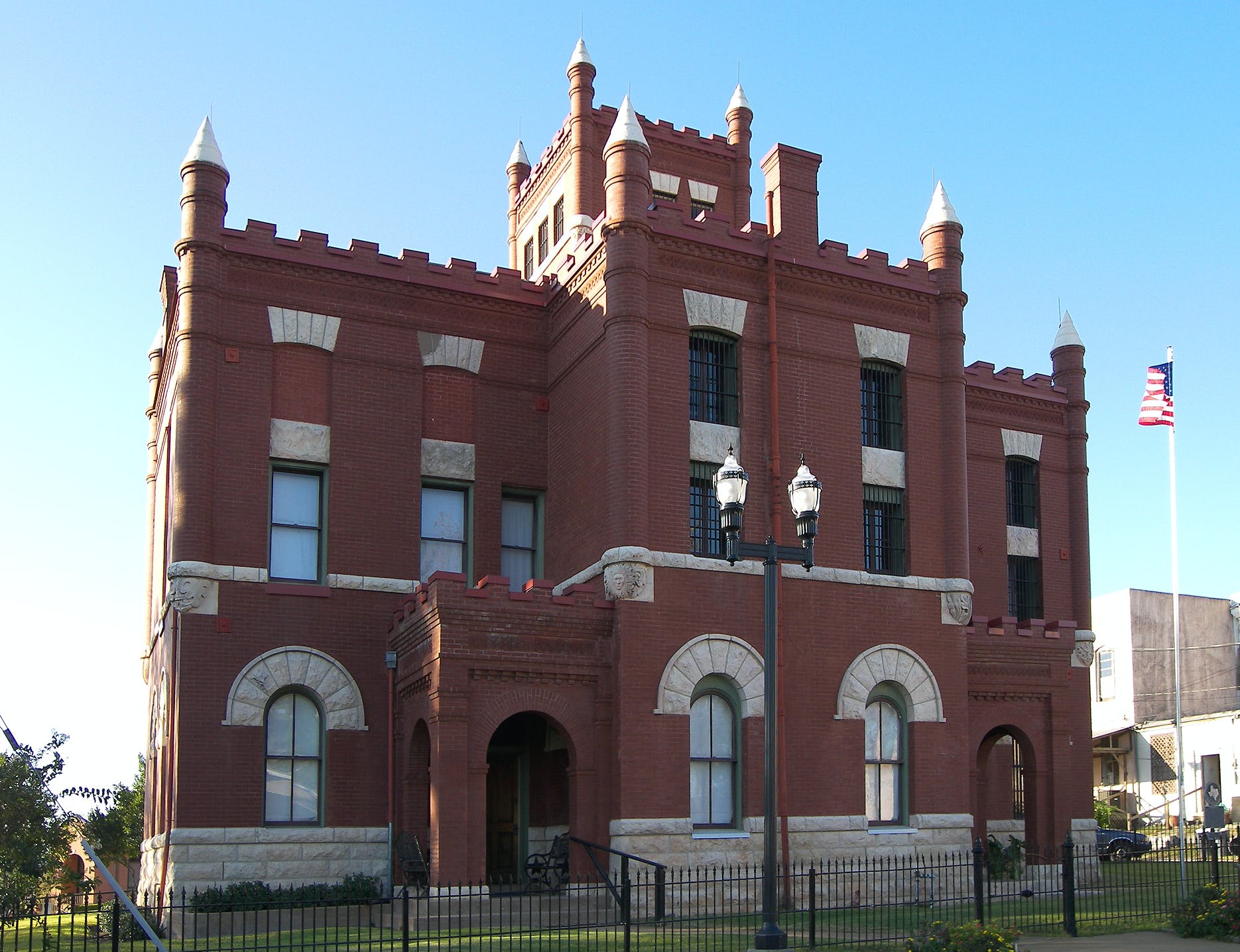 That was the gallows, and they were used only once, in 1901, when Gus Davis was strung up for the murder of Herman Schlunz.

Around the same time, wealthy Texans were building private homes with castle-ish tendencies, like Galveston’s Victorian Bishop’s Palace and Trube’s Castle,  and in Weatherford, the Pythian Home for children. Austin’s 1920s-era ivy-covered Pemberton Castle was showcased in Disney’s 1993 Home Alone knock-off Blank Check, while Waco’s 1890 Teutonic-style Cottonland Castle was purchased last year by Dirk Obbink, an American-born Oxford University scholar of ancient papyruses for a mere $270,000.  It had been empty for ten years and was in disrepair, and that it is now in the hands of an Oxford scholar is just another quirky chapter in its colorful history:

The castle required 120 train carloads of sandstone, as well as imported materials such as Carrara marble, Caen stone and Honduran mahogany paneling.

Irene Pipkin, whose family owned Pipkin Drug Stores, bought the castle in 1944 and passed it down to her daughter, Pauline Garrett. After Garrett’s death, it became the property of Austin Avenue United Methodist Church, which used it for a few years as a youth center until it became a financial burden.

A car dealer named Jack Schwan bought it in 1969 for $50,000 and lived there with his family for 12 years, ultimately renovating the upstairs interior in a “tropical fantasy” décor.

Fort Worth’s 1930s Lake Worth Castle, also known as Inverness and the Castle at Heron Bay, is apparently vacant save for a caretaker, falling apart, and not on the market. Some say it was once an illegal casino, complete with secret tunnels leading from the card tables to the boat docks on nearby Lake Worth. Later, after it passed into the hands of the Vultee Aircraft Corporation, this castle was visited by General Dwight Eisenhower and Jimmy Stewart, who called it home while filming Strategic Air Command at a nearby airfield.

Before and after its star turn as a getaway for leading men and future presidents, this castle’s history is alternately spooky and kooky.

An old stone farmhouse has stood on the site since about 1860 and has apparently been incorporated into the existing castle. According to legend, the farmer who owned that house was engaged to a woman who was found floating face-down in Lake Worth on their wedding day. Murder? Accident? Suicide? Nobody knows. At any rate, possibly to assuage their grief, the sister of the dead woman married the farmer a month after the drowning, and they lived happily ever—you know, aside from pesky occasional visitations by the dead sister/fiancée’s ghost. People say they’ve seen a woman in white run from the house down the water’s edge, where she disappears.

There was a serious fire and a suicide on the premises in the 1930s: that unhappy young man’s shade is now also said to haunt the premises, keeping the farmer’s would-be bride company for eternity.  In the 1970s, it was a hub of New Age classes and forums run by space alien abductees, dematerialists, astral projection claimants, and spirit watchers.

And now it’s crumbling away, surrounded by razor wire, its windows boarded, its roof peeling in the Texas heat.

The Depression brought the first era of Texas castles to an end, and in the post-war decades, a wave of kitsch-castle motels, gas stations and retail stores erupted along our and main roads.  We’ll get to those, and also explore the latest boom in more opulent Texas castle-homes in an upcoming post.