On the four-year mark of John F. Kennedy’s death, the gravestone of his presumed assassin, Lee Harvey Oswald, was stolen from the Rose Hill Cemetery in Fort Worth. Oswald, of course, had been killed two days after the president, and he was buried beneath an ornate marker that read “Lee Harvey Oswald, Oct. 18, 1939 – Nov. 24, 1963” along with a cross and a floral border. After the stone was recovered, Oswald’s mother replaced it with a simple marker that read, simply, “Oswald.”

This week the stone returned to Texas, but it took a legal battle to get it here. 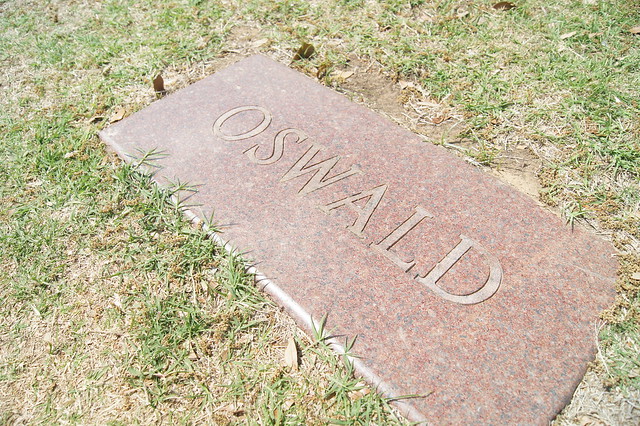 After it was recovered by police, Oswald’s mother kept the original stone in her house for safekeeping. When the home was sold to the Card family in the 1980s, the Oswalds made no attempt to claim it. As The New York Times wrote in 2012:

The Card family first stumbled upon the gravestone some 30 years ago when an electrician found it in the crawl space under the house of Mr. Oswald’s mother, Marguerite Oswald, which the family bought after she died. Ms. Oswald is said to have hidden it there after teenagers took the tombstone from her son’s grave site on the fourth anniversary of Kennedy’s death.[…]

The family asked Mr. Card’s step-aunt, who lived nearby, to take the original headstone for safekeeping sometime in the mid-1980s. Over the years, it drifted to Mr. Card’s step-cousin, Johnny Ragan, who kept it until he died in 2008.

That is when Mr. Card and his siblings said they started asking for the stone back, calling Mr. Ragan’s wife, Holly, at least three times to make arrangements to pick it up. “We knew it was there, and we talked about it being there,” Mr. Card said, insisting that Johnny was only safeguarding it temporarily.

Ragan’s family reportedly sold the stone to a roadside museum in Illinois for the bargain price of less than $10,000, where it lived alongside mannequins depicting President Kennedy and the First Lady, the seal from the birthday cake presented to Kennedy the year he was serenaded by Marilyn Monroe, and a small collection of Batmobiles.

The Cards spent the next several years in a legal battle to reclaim the marker. And, as of this week, they finally succeeded. As the Dallas Morning News reports:

The confidential legal agreement with Historic Auto Attractions owner Wayne Lensing prevents Card from disclosing any details or disparaging anyone. And my phone call to Lensing’s lawyer was not returned.

But the 75-year-old Card can sure talk about his excitement at having the gravestone back.

“It’s got a wow factor to it,” he said. “Think about it. It’s the original tombstone of the most famous assassin in the history of civilization, except perhaps for Cain, who killed Abel.”

Card said he has hoped all along that The Sixth Floor Museum will want to acquire and display the tombstone. But its clouded legal status has prevented any serious discussion till now.

We’ll see what happens with the gravestone now. Presumably, if the Cards decide to sell it to the Sixth Floor Museum or elsewhere, they’ll be hoping to recoup the fees they spent in reacquiring the stone from Lensing. In any case, it’s some sort of closure for a macabre story.