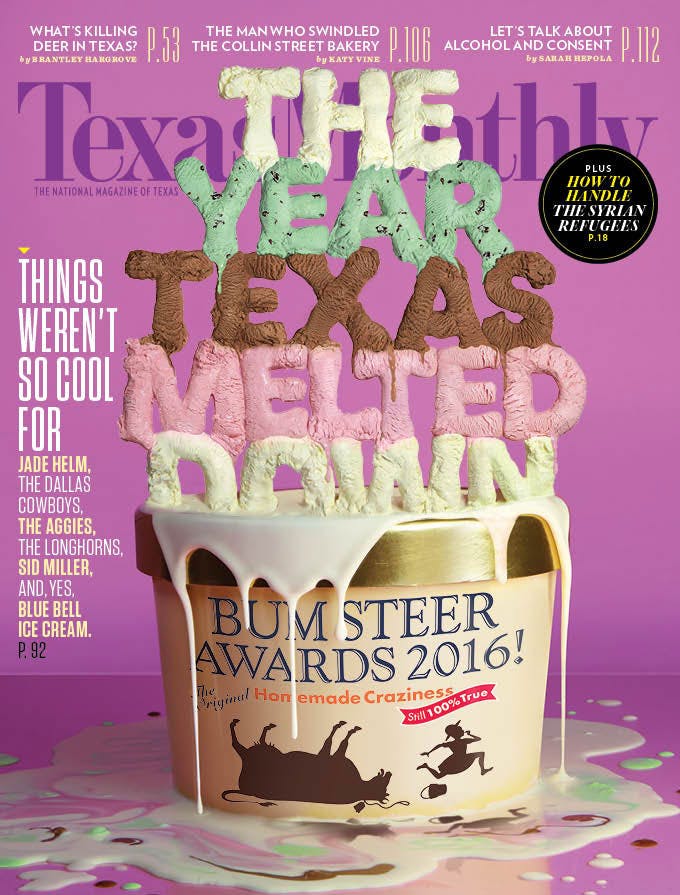 Whether this year’s Bum Steers cover makes you laugh out loud or prompts you to fire off an outraged email, you should know one thing: I had at least three flavors of Blue Bell in my freezer at the time of the recall. You should also know that selecting the Bum Steers cover is one of the hardest decisions we make each year. I always hear from readers about how much they treasure some of the past images—a “classic Texas Monthly cover” goes the compliment that carries with it the sharp edge of expectation. Certainly the Bum Steer Awards remain one of our most anticipated stories of the year, but knowing just how far to push it—without going too far, of course—is a tricky proposition.

The so-called “group of funny” who works on the story—David Courtney, Rich Malley, Jeff Salamon, Andrea Valdez, and myself—spend the year poring over clips from all over the state, which are submitted by staff members and readers alike. We meet in a secret location (a hotel bar down the street) to maintain the integrity of the list (over beers and Bloody Marys and free nuts). But for all the kooky criminals and posturing politicians, the big question is always who will be called the Bum Steer of the Year, and despite a few worthy candidates—familiar names including the Dallas Cowboys and unfamiliar ones like the Jade Helm 15 conspiracy theorists—in the end we couldn’t escape the fact that Blue Bell’s troubles overshadowed everyone and everything else. We were also struck by how willing many Texans were to cheer the company on even before all the facts were known about its safety record.

As for the cover image itself, the letters of the headline were created with real ice cream, which made quite a mess in artist Sean Freeman’s studio in London (the melt around the bottom of the carton is real too). Each individual letter was nearly a foot high, which helped bring out the texture of the various flavors. I hope you’ll think of this edition of the Bum Steers as the newest classic Texas Monthly cover.