Earlier this week, the rusty patched bumblebee was placed on the endangered species list, becoming the first bee species in the United States, among more than four thousand species, to earn that sobering distinction. Habitat loss, pesticides, and climate change—that is if you believe climate change exists—were the main culprits. The warning signs were there. In 2009 the documentary Vanishing of the Bees examined the decline specifically in honeybees—a species European settlers brought to the U.S., dubbed the “white man’s fly” by Native Americans. The following year, the documentary Queen of the Sun sang a similar refrain.

So what are a couple of bees lost when we’ve got so many? Well, for one thing, at least as it relates to the white man’s fly, that means no more honey. But the ramifications are more dire than that. Bees are great natural fertilizers of the world’s agricultural output. There is no telling the overall consequences to human food sources if the fate of the rusty patched bumble becomes a trend. What we need now are some brave, possibly mad, people to step up and defend the bees by becoming beekeepers. Our ecosystem depends on it.

“A lot of people in conjunction with beekeeping are also gardeners,” says Laura Salazar, who practices both disciplines. “They notice that their squash will be bigger and better filled out. It’s the bees’ pollination that helps that. Once they see that, they become a firm believer in keeping bees, especially if they’re into vegetable or fruit gardening.”

On Saturday, Salazar will host a morning workshop titled “Urban Beekeeping” at Friedrich Wilderness Park, in partnership with the Friends of San Antonio Natural Areas. It’s great timing in more ways than one. There are still months to spare for gathering all the proper equipment for the spring season. It’s also a good reason to take a break from reading about Donald Trump’s every move on social media and get outside. Talk about a new hobby that can channel serenity now. Salazar will present the tools of the trade along with how-to handouts on the basics of honey harvesting.

Among other topics, Salazar will discuss the pros and cons of wearing a bee suit versus just a veil. “The bee suit is like a security blanket for me sometimes, when I’m doing things quickly,” she says. “But when I’m taking my time, and I have a glass of wine in one hand, then yeah, you don’t need it.” She will explain how a smoker works to tame bees into a sort of sluggish submission when necessary, which aids in the harvesting process. And, depending on how her bees are producing, she will bring some honeycomb for people to taste. She will show how to build a Langstroth hive, considered the most universally accessible hive, using one of her own as an example. There won’t be any bees in the hive—a mature hive houses upwards of 60,000 bees and when combined with the wax can be “insanely heavy”—but a single, glass-encased frame from the hive, complete with bees, will be displayed. You’ll even find out where to get your very own supply of bees. “The Alamo Area Beekeepers Association has a guy, an Amish man who lives in Beeville, who will come up the first of May in a truck full of buzzing boxes, and for, I believe, $150 or $125, he’ll give you a box of bees with a queen,” she says.

Salazar grew up in Houston, where she was in the magnet program at school. She always loved science class and observing nature. Her mother was from Mexico and came from a family who kept bees. They would hollow out logs to create the hives. Salazar’s mother would walk by the logs with Salazar’s grandmother, who would say, “Hey stop, let’s listen to them pray.” Then they would put their ears to the hives to listen to the humming. 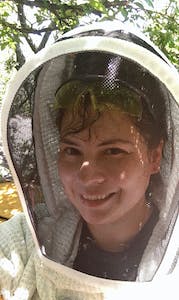 Salazar now lives near Canyon Lake. She thought she would someday become a scientist, an artist, or a farmer. She did teach art for fifteen years at the San Antonio Museum of Art, but her current reality is this: by day she delivers mail on a rural route in Spicewood, where Willie Nelson is one of her stops, and off the clock she operates Honey Love Bee Removal, a bee rescue operation she started in 2012. “I’m like the crazy cat lady trying to find homes for all these critters,” she says of her efforts to relocate the bees she extracts.

In addition to beekeeping, Salazar will also instruct workshop attendees on how to prevent an infestation of Africanized bees—or how to deal with them if they become a problem. She will use this particularly aggressive breed to dispel notions about bee stings. According to Salazar, all bee stings are different. She was once stung seven times in the same place by an Africanized bee and suffered not one ill effect. Another time she was stung just once and swelled up like Quasimodo. She reasons that the severity of a sting has to do with what the bee has been eating and how that reacts specifically to the constitution of the person being stung. Using photos of the various times she has been stung, she hopes to suppress people’s irrational fear of this unlucky but tolerable event.

“If you want to become a beekeeper, go out there and get stung by a bee, and then you’ll see where you’re at with the pain,” Salazar says. “I think people don’t give themselves credit for what they can take. Because, you know what, we are alive and we’re supposed to feel things and do things. And if we can’t take a little bit of nature, then that’s not living.”

AUSTIN
The King and Ziggy Stardust
The music gods have a thing for January 8: David Bowie and Elvis Presley, among other rockers, were born on that day. At the eighth annual BowiElvis Fest, an array of acts will celebrate that magical convergence (albeit six days later) with cover performances of songs by both legendary performers, plus original mash-ups.
Empire Control Room, January 14, 7 p.m. splicerecordstx.com

FORT WORTH
Take Stock
The venerable Fort Worth Stock Show and Rodeo dates back to 1896 and may just be the only major rodeo where the stock show rightfully deserves first billing. This is the Stockyards, after all, a hot spot on the Chisholm Trail, the cattle-driving path immortalized in Larry McMurtry’s beloved novel Lonesome Dove.
Various locations, January 13 to February 4, fwssr.com

HOUSTON
This Land Is Your Land
A new year (and a new president) is perhaps cause for reaffirming one’s patriotism. Expedite the process by attending “American Skies,” a production by Mercury, a chamber ensemble that utilizes only period instruments. Music by the likes of Gershwin and Glass will be performed alongside a film illustrating a historical look at the flowering of our country into a developed nation that has long been great.
Wortham Center, January 14, 8 p.m., mercuryhouston.org

HOUSTON / DALLAS
Diverse Diversion
Xenophobic forces seem to be taking over the world but a reality check of our multicultural future can be gleaned from English writer Zadie Smith, on a book tour through Texas. Swing Time, yet another lauded novel on race, class, and identity, centers on two girls who establish their friendship in dance class because of the color of their skin.
St Paul’s United Methodist Church, January 13, 7:30 p.m.; Dallas Museum of Art, January 14, 7:30 p.m.

SAN ANTONIO
Dream On
The final nine days of the sixteen-day “Dream Week,” San Antonio’s community-wide summit on tolerance, features dozens of talks, screenings, exhibits, and more. The highlight will be a grand display of brother- and sisterhood, with a quarter of a million people anticipated to walk 2.75 miles through the East Side for the thirtieth annual Martin Luther King Jr. March.
Various locations, January 13–21, dreamweek.org, and Martin Luther King Academy, January 16, 10 a.m., sanantonio.gov/MLK