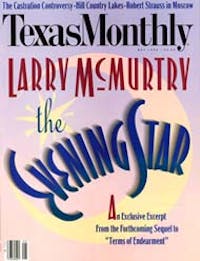 There are seven of them, pale blue jewels folded into the dark green hills, stretching from Austin almost halfway to Abilene. If you know them, you don’t think of them, you don’t think of them as the Highland Lakes; they have little in common but the water of the Colorado River. Town Lake, the lowermost of he chain, is as domesticated as the black swans that glide past the Four Seasons Hotel in downtown Austin. It is a lake for lovers in rented canoes, for transplanted Yankees in slender racing sculls, and for earnest joggers along its shores.

Lake Buchanan, at the upper end of the chain, is vast and largely uninhabited. Its constituency is West Texas. People from Midland load up the kids and the dog after work on Friday and by midnight they are easing the boat off of the trailer into Lake Buchanan. It is a lake for 70-mile-per-hour bass boats, nesting bald eagles, and the largest striped bass in Texas. Folks talk plain and laugh loud on Lake Buchanan (that’s “Buck-cannon,” thank you, named for old Congressman Jim Buchanan, who got it built in 1937, the first of the chain). In between, going upriver, are lakes Austin, Travis, Marble Falls, LBJ, and Inks, each with its own personality.

My romance with the lakes began 28 years ago when I was a wire-service reporter covering President Lyndon Johnson as he sped about his beloved Lake LBJ, then called Granite Shoals. I learned to sail on lake Travis, and I’ve caught stripers on Lake Buchanan with master fishing guide James McCorkle. I taught my kids to fish at Taylor’s Slough on Lake Austin, to ski at Lake Travis, and to camp at Inks Lake. For years our family took our summer getaways at Valentine Lodges in Kingsland; for the past 12 years we’ve had a weekend home on Lake LBJ. This is my opinionated guide to the seven lakes I’ve come to love.

Lake Austin, which starts at the edge of old West Austin and snakes upriver twenty miles, is for waterfront condos and $20,000 ski boats. Narrow and protected by rugged hills, it’s no lake for sailing. It is ideal for skiing, but don’t fall: On a nice weekend the next boat will be twenty yards behind you. Lake Austin’s water is always cold, because it comes from the bottom of Lake Travis, 270 feet below the top of the dam. The best thing to do with Lake Austin is look at it—from the deck of the Lakeview Café, from the sleek Loop 360 bridge, from the top of Mount Bonnell.

If you like Austin as it was in 1974, you will love Lake Travis. The hippies from Armadillo World Headquarters now live on houseboats on Lake Travis, and the bikers from the Split Rail Inn now hang out at Paleface (now officially Pace Bend) Park. The bankrupt developers retreated to Lake Travis to regroup for their next assault. Hippie Hollow is still the only officially sanctioned nude beach in Texas. People with no visible means of support cruise Travis in forty-foot yachts. Travis is Willie Nelson’s lake; the IRS took his lake home, his golf course, and his recording studio, but the soul of Travis still belongs to Willie.

On he map Lake Travis is a serpentine dragon, its 65-mile-long body contorted into great loops—Hudson Bend, Anderson Bend, Pace Bend, Muleshoe Bend, Branches like Cypress Creek and the Pedernales River reach many miles back into the Hill Country. With its many twists and tributaries, Travis has the most shoreline of all the lakes —270 miles, most of it undeveloped.

Travis is a scuba diver’s delight. Its water is 225 feet deep in places and comparatively clear. Divers congregate just off Windy Point, Starnes Island, and Mansfield Dam, all on the lower end and exposed to the prevailing southeasterly wind. Commander’s Point Yacht Basin moors row after row of elegant sloops, ketches, and yachts. The Austin Yacht Club makes its home in a broad cove a little farther up the lake. Upstream another five miles is Lakeway, the pioneer of planned lakeside communities for the affluent.

The main trouble with Lake Travis is that it can’t decide just how bit it wants to be. It is supposed to cover 18,929 surface acres, but it has covered a little as 7,565 acres. If you own a “waterfront home” on Travis, the water can be half a mile away one year and ten feet over your roof the next. Travis is the major flood control lake in the chain, and that means the interest of those who live and play on it must yield to those of everybody else up and down the Colorado River. It also means that the island where you picnicked last summer may not be there this year—or worse, tat a rock that was fifteen feet deep last month may be six inches under the surface today. It’s hard to love a lake that won’t stay in one place.

Just above Travis is the least of the lakes. Marble Falls is the principal service town for the upper lakes and the largest town in Burnet County. But it isn’t the county seat, and I’ve always figured Lake Marble Falls was created so that the town wouldn’t feel cheated out of a lake too. It’s really just a wide river created to beautify a town.

The smallest of the lakes (only four miles long), but one of the prettiest, is Inks, just below Buchanan Dam. Hill Country families have been spending their holiday weekends at Inks Lake State Park for two generations. Before that, their ancestors took their R&R at a nearby speakeasy, where the ballroom, bar, and bandstand occupied adjoining limestone chambers 35 feet underground. The subterranean speakeasy is now Longhorn Cavern, a perfect respite on a scorching day when you feel as if you’ve gotten enough sun to last forever.

The most perfect of the lakes is LBJ, a twenty-mile ribbon of tranquility that begins fifty miles west of Austin. The locals, many of them originally from San Antonio, were deeply resentful when Lyndon insisted on having it renamed for himself, but he had earned the honor. He passed the legislation creating it, and it was his playground during his presidency. He had the fastest ski boat and the largest cabin cruiser on the lake. Scharnhorst Ranch, his summer retreat, sat on a rolling, live-oak-shaded hillside on the Llano River arm, one of the loveliest of many gracious homesites.

Lake LBJ is the only true constant-level lake in the chain. During last winter’s floods, Travis rose 24 feet. Even Lake Austin, which is supposed to be constant-level, rose 10 feet in places. Lake LBJ never varied more than a foot. That’s why its shores are lined with hundreds of well-groomed permanent and weekend homes.

Most day-trippers use the lakes closer to Austin and San Antonio, so LBJ is left pretty much to its residents, creating a neighborly ambience that is rare on public lakes. If your boat runs out of gas, somebody on shore will notice and come to your rescue. When your preteens go out on their jet-skis, you can stay in the shade reading a book without worrying that they’ll be kidnapped. Our next-door neighbors once went to Pittsburgh for three weeks and didn’t bother to lock their house.

For those not fortunate enough to own a piece of this paradise, LBJ has lakeside resort rentals for all tastes, from the posh Horseshoe Bay Resort to the funky Sandyland Resort. If you want to catch some catfish, the best stink boat in the world is for sale in Kingsland at a small fishing resort called Llanorado (that’s at the confluence of the Llano and Colorado rivers, naturally). If you prefer your catfish already caught, eat at the Farmhouse in Granite Shoals.

No matter which of the lakes you choose, you’ll find that lake like is a notch or two looser than landlubber life. If you show up at the lake on the first warm Tuesday in April, no one will ask why you’re not at the office, and if you decide you’d get a better tan with your top off, your neighbor isn’t going to break his neck trying to sneak a peek. Lake folks live and let live, and they ask only that you show a little affection for the waters that make the lakes of the Colorado so different from the rest of inland Texas.

In the Swim—Your Lakes Guide

Lake Buchanan No boat rentals: bring your own or hire a guide. The Buchanan Yacht Club has rates from $85 and free sunset cruises for guests (793-2568; all area codes 512 unless specified). Crystal Cover Resort (793-6861) has cabins, houses, and condos from $56 to $182 a night. Club Pocahontas (793-6128) serves up live music, dancing, steaks, and seafood. Black Rock Recreational Area, on Texas Highway 261, has RV and tent sites and a sandy beach; Cedar Point Resource Area, on FM 3014, is for primitive camping.