Forget heart disease and cancer and all the other tragic or banal ways most of us will exit this world of the living. Instead, seek distraction via our completely unscientific and by no means definitive list of the most dangerous creatures in Texas that could, by some fluke, kill you first.

For sweet relief from the interminable hellscape that is the Texas summer, plunk your hot bod into the nearest swimming hole. Just beware of the Naegleria fowleri, a nasty little single-celled organism lurking in warm water and nicknamed for its favorite pastime—literally eating human brains. Naegleria enters your body through the nose and shimmies into your skull, where it plays around in your brains, destroying the tissue. (This amoeba can also strike when you use contaminated tap water to flush your sinuses, FYI.) It is present in freshwater throughout Texas, and there’s really no body of water that can be considered safer from it than others. Experts advise keeping your head dry when wading in a stream or lake where water temperatures are warm and water levels are low.

The good news? Infections are rare: only 34 were reported in the United States between 2009 and 2018, the CDC reports. “It is extremely serious and almost always fatal,” Texas Department of State Health Services spokesman Chris Van Deusen told KWTX in September. “Since it’s so rare, we don’t know why a few people get sick while millions who swim in natural bodies of water don’t.”

Heading to the beach? Just hope you don’t encounter a particularly vicious bacterium called vibrio, which attacks swimmers in the ocean or brackish water. Vibrio gets under your skin through cuts, scrapes, or even insect bites, then spreads quickly through the soft tissue of your body—a disease called necrotizing fasciitis, which causes painful red swelling followed by fever, ulcers, blisters, black spots under the skin, and oozing pus. You also might start to feel dizzy, fatigued, or nauseated, or you could have diarrhea.

According to Texas A&M College of Medicine professor Hector Chapa, between 700 and 1,200 people contract necrotizing fasciitis every year. One in three of those people will die, as did two men at Texas beaches in July. If flesh-eating bacteria finds its way into your body, you need antibiotics as quickly as possible, followed by possible surgery and the removal of dead tissue to keep the infection from spreading, before sepsis, shock, and organ failure set in.

They slither throughout the state, but for a generation of TV-watching Texas children, the Lonesome Dove miniseries instilled a healthy fear of one snake in particular: “Water moccasins!” unlucky young sprout Sean O’Brien screamed moments before the credits rolled on the first episode, as he thrashed in the Nueces River in a terrifying tangle of moccasins, also known as cottonmouths—right before one bit him on his cheek and sent him to an early grave.

Elsewhere, Texans looking out for coral snakes remind themselves that “red and yeller kill a feller.” They also watch out for the copperhead and the western diamondback rattlesnake, named for its distinctive diamond-patterned markings. But compared with many other snakes, the timber rattlesnake, also known as the canebrake rattler, is doubly deadly. It possesses not one but two kinds of venom: neurotoxic, which attacks the nervous system, paralyzing its victim; and hemotoxic, which destroys body tissue, making you easy to digest. I knew an East Texan who nearly died when a canebrake fanged his hand, permanently gnarling a couple of his fingers.

The female is jet black, with a red or yellow hourglass shape on its underside. Its victim might not even notice the pinprick of its bite, only feel an array of unpleasant symptoms later, from cramping and convulsions to sweating, tremors, vomiting, and loss of consciousness. Look for black widows around woodpiles and “outdoor toilets,” warns the Texas Department of State Health Services.

Texas’s other species of venomous spider, the brown recluse, often hides in dark basements or garages. It’s golden brown, with a dark fiddle-shaped pattern on its back, and its venom can cause fever and chills, lesions, restlessness, or—believe it or not—“nothing.”

At night, when alligators mosey into the waters of Texas bayous and swamps, pairs of their eyes catch the moonlight and seem to glow. With their sharp teeth and powerful jaws, and bodies weighing close to a thousand pounds, they can drag you underwater to drown you. If a gator hisses, you know you’re too close. These primordial reptiles rarely hassle people, unless they lose their fear of humans and become aggressive. Four years ago in Orange, a 28-year-old man became the first fatality from an alligator attack in Texas since 1836 when he uttered a few poorly chosen last words (which quickly swept the internet and became an unfortunate catch phrase) and jumped for a late-night swim into a bayou where a twelve-foot-long alligator lurked.

The Shark Attack Database reports 58 unprovoked shark attacks in Texas since 1900, including five that were fatal. The last person killed by a shark in Texas, 40-year-old Hans Fix, was surf fishing in waist-deep water off Andy Bowie Park on South Padre Island in 1962 when an unknown species of shark bit his lower right leg. “You’ll never go in the water again,” as they say.

Also known as cone-nose bugs or chinches, these insects feed on blood at night and like to bite humans around mouths or eyes, hence their reputation for “kissing” their victims. About half of kissing bugs are infected with a parasite that can be passed to humans when the bug poops near the site of the bite, causing Chagas disease. Early symptoms—like fatigue, rash and loss of appetite—can last weeks but make the disease difficult to diagnose because they’re so similar to other illnesses. A little less than a third of bite victims go on to develop chronic Chagas disease, leading to an enlarged heart and other cardiac and intestinal problems, including an enlarged esophagus or colon, that make digestion difficult. The complications may not appear for decades. If left untreated, yes, it can kill ya.

Shake out those boots before you slide ’em over your stockinged feet—scorpion stings, while rarely fatal, can cause intense pain and swelling. The venom can trigger allergic reactions, leading to difficulty breathing and twitching muscles, as well as vomiting. (Pro tip: if one of these lobster-like arachnids ever hitches a ride to Garner State Park in the bag where you keep your air mattress, and then it pricks you on the palm, immediately stop setting up camp and promptly dunk your hand in the Frio.)

As if Texans needed another reason to panic in the aftermath of Hurricane Harvey, viral videos revealed giant flotillas of invasive fire ants, a species that adapted to survive frequent flooding in its native South America by forming giant, teeming mats of up to 100,000 venomous ants looking for a dry place to reestablish their cursed colonies. When the waters recede after the next big flood, just be glad they didn’t land on you.

Also known as the cougar, panther, puma, or catamount, this powerful but shy wildcat could absolutely murder the average human if it wanted to. But it doesn’t want to. Only four mountain lion attacks on humans in Texas have been reported since 1980, all of them in remote areas of West Texas, and none of them were fatal.

Often oblivious to their surroundings as they noisily root around for insects and other grub, about 20 percent of these cute little armored creatures are carriers of leprosy, or Hansen’s disease, the ancient ailment seen as a curse from God during biblical times. Armadillos likely acquired the microbe that causes leprosy from humans sometime after Christopher Columbus showed up in the New World. They can retransmit it to humans who come into contact with them and are responsible for about one-third of leprosy cases in the U.S. each year, primarily in Texas and Louisiana.

“The important thing is that people should be discouraged from consuming armadillo flesh or handling it,” Dr. Richard W. Truman,  a researcher at the National Hansen’s Disease Program in Baton Rouge, Louisiana, told the New York Times.

Which raises the question: are folks still paying $2.50 for ’dillos down in Hallettsville?

A deer doesn’t have to crash through your windshield at 70 miles per hour to inflict harm on human beings: “Whitetail attacks on humans aren’t as rare as you may think,” reports OutdoorLife magazine. “And when they do occur, things can get ugly in a hurry.”

In 2007, the magazine reported, a Texas fisherman was watching as a nine-point buck swam across the Trinity River, shook itself dry, and its “demeanor changed from one of simple curiosity to one of pure malevolence.” The buck pawed the ground and charged, smashing the angler and tossing him into the river, where they tangled in the water. When they climbed out, the buck charged again, slamming him to the ground and stabbing his face with his antlers. The man’s nephew had to slit the buck’s throat to end the brutal blitz.

So, you know, watch out for those whitetails. And everything else.

This article has been updated to correct a mistake about the fire ant’s native habitat, and the location of the brown recluse’s fiddle-shaped pattern. 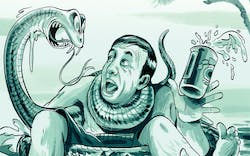