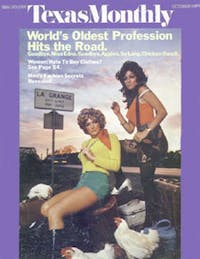 ABOUT THREE YEARS AGO, DR. Joseph Goldzieher, a researcher at San Antonio’s Southwest Foundation for Research and Education, set out to determine if numerous side effects reported by women using oral contraceptives might be psychological in origin.

He recruited 76 women to use as a control group, some of whom were referred by Planned Parenthood of San Antonio, where the women were told they would be getting birth control medication from Dr. Goldzieher. Each of the 76 women had borne children; most did not want any more. But ten of those women—all poor Mexican Americans—did get more children, because unknown to them, they were given placebos, not oral contraceptives as they had been led to believe.

A minor medical furor arose when the results of the Goldzieher experiments were reported at the March 1971 meeting of the American Fertility Society. Although the results did tend to confirm the research hypothesis, and although Hungarian-born, Harvard-educated Goldzieher held, and continues to hold, a respectable reputation, he had violated one of the most important tenets of research ethics—he had failed to obtain the informed consent of his subjects. In the 1964 Declaration of Helsinki, research scientists from all over the world declared that “The nature, the purpose, and the risk of clinical research must be explained to the subject by the doctor.”

The ten women became pregnant during the course of the study, not because of the failure of the drug they were taking, but because they really hadn’t been taking any drug, and no one had told them of the extent of the risk.

Gynecologists speaking off the record have labeled the study “totally unethical.” Dr. Goldzieher defended himself at the time by saying that the women had been instructed to use vaginal cream as an added protection. It is common knowledge, however, that vaginal cream is not a very effective deterrent to pregnancy. Goldzieher concedes this himself. He admitted to a medical reporter that the pregnancy ratio turned up in his study was consistent with previous trials of vaginal cream and foam. “It just doesn’t always work all that well,” he said. Concerning the pregnancies, he said, “We could have aborted them if the abortion statute here in Texas weren’t in limbo right now. A court order overturned the law and the case is awaiting Supreme Court review. If we had a liberalized law, we’d abort them.”

Another gynecologist, Dr. Louis M. Hellman, said that the pregnancy rate in the Goldzieher study “isn’t far from what you’d expect if you provided no protection at all.”

Women’s groups protested the study and last summer, the Food and Drug Administration (FDA) sent the physician a mild letter of rebuke for failure to obtain informed consent from his subjects, to report adverse effects, and to follow study protocols. Syntex Labs, which had jointly financed the project with the Agency for International Development (AID), withdrew their support and a curtain of “no comments” descended around the whole affair.

That curtain is still drawn today, and Goldzieher has just received a new contract for more than $100,000 a year for further contraceptive studies. The doctor will not respond to calls concerning the study from reporters. Myron Chrisman, present director of the San Antonio affiliate of Planned Parenthood, reacts to questions concerning Goldzieher with indignation: He wasn’t there at the time, he says. No staff member will have anything to say on the subject, he adds. Planned Parenthood does not refer women into experimental studies, and does not send them to physicians who use drugs not approved by the FDA.

Bloebaum also believes that the doctor and the affiliate might be able to cite some mitigating circumstances if they would speak with the press. “I personally thought that Dr. Goldzieher and the affiliate got the short end of the thing, says Bloebaum. But he offers no more details.

As for the new study, which is again being funded by AID, but without the help of Syntex Labs this time, a medical magazine reports that the project will be a metabolic and endocrine study of steroids, lipids (fats), and carbohydrates in women using oral contraceptives. The AID research advisory committee reports that this time, women in the control group will be fitted with IUDs (intrauterine devices). And, besides using Chicanas, the present AID outline proposes employing women from a number of underdeveloped countries.

The full program will be financed with $350,000 a year spread over two or three years, and reportedly, about a third of the money will go to Dr. Goldzieher’s project. The rest would be subcontracted to other organizations, but Goldzieher will be project director , overseen by AID’s Bureau for Population and Humanitarian Assistance.

WRITERS, ESPECIALLY TEXAS WRITERS, TEND to float around. Larry King’s ways have in the past taken him from the streets of Midland to the wilds of Washington, D.C. He is now at Princeton teaching courses in politics and writing which, as he is quick to point out, is not bad for a man who never graduated from high school.

Grover Lewis, whose prolific pen has been firing the pages of Rolling Stone for the past two years, has left Stone for good and has returned to San Antonio. He and Sherry Kafka, another San Antonio writer, had signed a contract with Straight Arrow Books, a division of Rolling Stone, to write a book about John Connally. Jann Wenner, Stone’spublisher and editor, then did an about-face and canceled the book. The case will most likely end up in court. In the meantime Lewis is writing a screen play set in Texas concerning rodeo cowboys and a Mexican dope ring.

Larry McMurtry, who had left Texas several years ago for those same wilds of Washington, D.C., flew in to San Antonio a few months ago planning to hole up in a hotel room for six weeks to finish his next book. “I’ve always wanted the chance to poke around San Antonio,” he said, but he poked for just about a week before deciding that he could write better elsewhere. Returning to the East, McMurtry discovered that Peter Bogdanovich has cast his 11 year old son, James McMurtry, in Daisy Miller, Bogdanovich’s next movie.

. . . .FOLLOWING THE EPIDEMIC IN WASHINGTON, D. C., Maryland and California, symptoms of the disease janua aquaria contagiosus, popularly known as Water-on-the-gate, or simply Watergate, began to appear in Texas, at first in Bexar County, a metropolitan area with a high percentage of politicians, good breeding grounds for the virus.

It began with charges of aggravated assault with a deadly weapon against Elmendorf policeman Robert Ruedrich. Preliminary observations, according to the charges, indicated the 19-year-old patrolman pointed his police revolver at a service station attendant who wouldn’t sell Ruedrich more than ten gallons of gas. Immediate treatment of freeing the officer on a $500 personal recognizance bond was apparently unable to stop the spread of the disease, for within 24 hours the Elmendorf chief of police, Lester Robert Park, was charged with deserting his child in Houston. Again bond was posted (this time $400), but to no avail. Within days the Bexar County district attorney and grand jury began an investigation into wholesale corruption in the Elmendorf police department.

The first signs of the latest attack were negligible at first: a motorist running a stop sign. But when it was revealed that the man was fined, in addition to $27.50 for the stop sign offense, $36 for parking his car on a country road without lights, and $48 for failure to appear in court on the parking charge, investigators became suspicious. When the motorist said he paid the fines directly to Park, never saw a judge, never saw any court papers, and was fined $70 the reason for which he never knew, investigators were almost certain—Watergate had spread to Texas, and a speedy attempt to head it off was made by subpoenaing Elmendorf city records.

But they had moved too late. Already the disease had spread to the opposite side of Bexar County, to the Southside Volunteer Fire Department. There the illness surfaced with the revelation that Mrs. Patricia Bohls, secretary of the volunteer organization, had taken one of the department’s three fire trucks and refused to return it. Mrs. Bohls claimed she had uncovered irregularities in the department’s purchasing, namely that $650 of repairs on the fire trucks had not been made; the truck stalled and water could not be pumped from it, she said. She also said the department was improperly reorganized (after other members of the department tried to oust her as secretary), that the firemen were discriminatory toward Mexican-Americans, and that the firemen were often drunk.

It could not be determined immediately whether Mrs. Bohls was a victim of the disease or simply describing its symptoms. But its symptoms did spread through the department with the other fireman charging that Mrs. Bohls had kept department records illegally and had stolen the truck, and with county officials refusing to step in to settle the matter.

Symptoms became more acute as winter approached in Texas. Some of the signs of the illness could hardly be believed by bystanders: Police Chief Park claiming executive police chief’s privilege in refusing to appear before a special Texas Senate investigating committee; the accidental revelation that the entire 248 square miles of south Bexar had been wire-tapped to try to get incriminating statements from firemen; and the firemen’s claim that their duties as firefighters and Mrs. Bohls’ duty as secretary actually constituted a separation of powers upheld by tradition and by the Southside Fire Department Charter. By 1974 the disease had spread to Hondo with the great chicken feather scandal, north to Denton with the diversion of the Red River to that city by a coin-operated laundry chain associated with county officials, and to the west with the illegal use of Big Bend mountains for an out-of-state controlled dirt skiing franchise. And, of course, the rest is history. . . .

FOR THE FIRST TIME SINCE the early 1950’s, Texas motorists may now turn right against a red signal. Among the myriad laws that went into effect on August 27, 90 days after the Legislature adjourned, was one designed to encourage speedier traffic flow at the cost, perhaps, of an occasional collision now and then.

The state’s traffic engineers greeted the proposal with some skepticism last spring. Many would have preferred a law allowing right turns on red only where a posted sign so indicated, rather than one requiring the municipality to pass an ordinance and post a sign prohibiting right turns at intersections where they were deemed too dangerous. Permissiveness won out, and the turns are now allowed at every signal in the state except those where a sign specifically commands otherwise. For the truly adventurous, the statute also permits left turns against a red signal from one one-way street to another.

Despite the fact that right-on-red has been working satisfactorily in California and several other states for years, observers at first feared that Texas traffic engineers would over-react to the change and plaster the state with prohibitory signs. In the major cities at least, this hasn’t happened. Houston has prohibited the turns at only four or five complex intersections. Dallas and San Antonio, which lack the Bayou City’s neat grid patterns, still have only posted signs at 20 to 25 sites representing approximately one percent of their total signalized intersections. Fort Worth, which contrary to Texas mythology has not permitted right turns on red in recent years, has also posted about 25 signs.

The engineers were considerably reassured by conversations with their counterparts in California during the summer, and most expect the new system to work smoothly. What will happen in the smaller towns remains to be seen.