Grapevine televangelist Ed Young channeled his very best Siegfried and Roy in his Easter sermon this year, bringing a caged lion onto stage at his Fellowship Church.

Clad in a pink jacket and khakis, Young also carried a lamb around for ten minutes of his sermon. “Let’s give it up for the lamb and the lion!” Ed Young said over the bleats of the increasingly agitated lamb. The lion, after batting his paws at the handlers, spent the rest of the sermon lazing about in his cage.

“Jesus was called and is called, the Lion of Judah, he is also called the Lamb of God. You can’t just call him a lamb without calling him a lion. He’s a lion-like lamb and a lamb-like lion. A paradox,” Young said.

Young stressed the importance of acknowledging Jesus’ dual nature: “If Jesus is just a lamb, he’s not threatening, he doesn’t get up in my grill, he doesn’t get in my business,” he said. Channeling Jesus’ lion-like nature, Young said, gives believers “Godfidence” and “spirit-led swagger.”

On Good Friday, Young revealed his Easter plans in a tweet:

Not everyone in the audience was amused by the lion’s presence: “Thousands and thousands of churches are able to convey the same exact message without using live animals,” Stacy Smith, vice president of the Humane Society of Flower Mound, told WFAA.

The stunt also may have been illegal: A Grapevine city ordinance requires anyone bringing a “wild animal” into the city limits to acquire a permit, and Fellowship Church did not do so in this case, Grapevine police spokesman Sgt. Robert Eberling told the TM Daily Post. Police are still investigating the matter and deciding whether or not to issue a citation.

If you prefer your church low-key and your pastor quiet and safe, Ed is not your man. He will put a bed on the roof and tell you it is about time people heard what Christ has to say about intimacy. He will integrate every element of contemporary music, high-tech presentation and modern vernacular to bring a very traditional message to thousands each week. It minces no words, it allows no fudging and leaves nothing uncertain. …

Everyone is entitled to personal taste in terms of the worship they enjoy. Fellowship’s flavor is pure, unmitigated Bible 101 packaged in a 21st-century way that attracts tattooed twenty-somethings alongside grandparents. While some find these trappings a bit intense, others may be challenged by the thoroughly traditional messages within: God said it, you need to believe it, and that settles it.

The ripple of controversy since Sunday is not the product of theological discord but rather animal rights sensitivities. Some have said the cage was not in the best interests of the lion.

Well, I checked, and the lion is back on his spacious preserve in California, enjoying a happy lion life. Meanwhile, Fellowship attendees got a lesson in incorporating the Christlike qualities of the lion and the lamb in a far more vivid fashion than they would have if the sermon had been delivered without the animals. Personally, I believe the lion’s time was very well-spent.

Couldn’t Ed — couldn’t any pastor — deliver that sermon without the actual animals on stage? Of course. But I wouldn’t be writing about it, you wouldn’t be talking about it, and my third-grade son would not be invoking it every day since, with a perfect sense of what the sermon meant.

Young’s Easter sermon kicked off his five-week “Wild” series. According to the church’s website, in the series Young will be “joined by some of the most powerful animals in the world” in order to “communicate biblical truths into our lives” and help his flock “discover that God has a powerful and awe-inspiring plan for” all. Young has yet to reveal which animals he’ll be using as furry metaphors, but “there is buzz about a camel,” according to Davis, who added “I would think a serpent would be in there somewhere. If the snake talks, that will be a whole other column.”

Young, of course, is no stranger to employing unorthodox visual aids to get his point across. This January, he participated in a 24-hour “bed in” with his wife on the roof of his megachurch, which he live-streamed on the Internet. Last year he preached his prosperity gospel next to a Ferrari and a Rolls Royce. “God gave me a Ferrari because I am a Ferrari. You’re a Ferrari too. God has given you a Ferrari,” Young said, according to the Christian Post.

Watch Young’s crew unveil the lion around the 7:20 minute mark in his sermon: 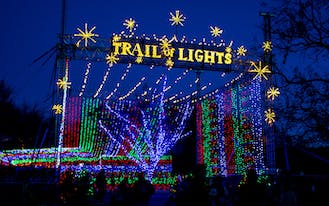 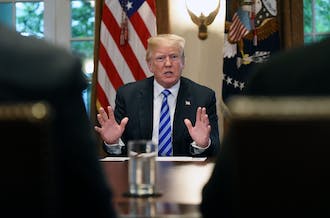 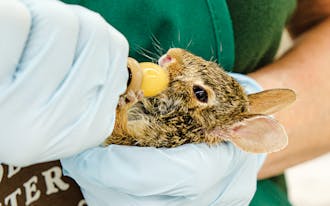 Meet the Baby Beavers, Squirrels and Ducklings Saved During Harvey