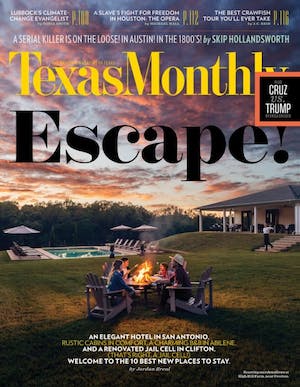 The issue of Texas Monthly is something of a milestone for us: it’s the first issue in decades produced without the participation of our fact-checking colleagues David Moorman and Valerie Wright, both of whom retired in March. It’s difficult for anybody here to imagine putting out a magazine without them. David joined Texas Monthly in 1975, left in 1984, and then returned in 1987; Valerie arrived in 1986, left in 1993, and returned in 2000. That’s approximately sixty years of service between them—sixty or so years of combing through hundreds, if not thousands, of stories of a staggering variety, in search of errors large and small. Nearly every writer here has been spared embarrassment—and perhaps worse—by David and Valerie’s painstaking efforts.

The Partner
“David was my fact-checker on virtually all of the major stories I did over the past eighteen years. He was meticulous about how he went about his work, as anyone who ever strolled into his cubicle could tell you. Everything was color-coded and arranged at a right angle. Red, green, and blue pens signified different things (I never learned what, exactly), and on the big stories, documents were collated inside giant three-ring binders with colored tabs. In order to meet his high expectations for accuracy, I would annotate every single sentence of my stories for him—not a small feat when working on a 10,000-plus-word story. David, in turn, would write hundreds of footnotes in response. On one especially difficult story, we collectively generated nearly one thousand footnotes. By the time David was done checking one of my stories he often knew the subject better than I did. He didn’t just depend on my footnotes for guidance; he did his own research and often challenged me on key points, though always in a gracious and constructive way. Among his other virtues, David had a fearsome work ethic. When his mother passed away during a particularly difficult deadline, he attended to matters in Fort Worth, where he had grown up, and then quickly returned to the office, where he continued working on a story of mine and saw it through to the end. A lot of people might think having a person comb through your work for errors would be unpleasant. But it was wonderful, actually, because it meant that I could sleep at night. I didn’t wake up at 3 a.m. and worry that I had gotten something wrong. I always knew that David had my back. David had a big life outside of work—writing poetry, revising a novel, and myriad other creative projects—but he never called attention to what he was doing. Sometimes he would reveal himself for a moment by, say, sketching out your horoscope or spontaneously quoting Roberto Bolaño or expounding on an esoteric topic like ‘phantom limb theory.’ But mostly he kept the work center stage. I’ll miss having him always looking over my shoulder.” —Pamela Colloff, executive editor

The Conciliator
“Being a fact-checker is a very difficult job because you’re basically mediating between two nervous people—the writer who’s on deadline and the person who’s being written about. Valerie always handled that situation with incredible grace. Writers can be extremely anxious during the deadline process, and she was expert at dialing that down. Valerie was like a surgeon; she was very good at delivering very bad news. She could tell me that I had gotten the timeline on a story wrong and would have to completely rewrite a section, but she would say it in such a gentle manner that by the time I got back to my computer to start revising, I didn’t feel completely resentful or exhausted. Though we worked together for many years, I don’t think we ever exchanged a snippy word. That ability to remain calm also worked well with the people she had to call. My sense was that even when Valerie was discussing the most sensitive subjects, they never got upset. She could ask someone, ‘When did you stop beating your wife?’ and, you know, he would answer the question. Of course, Valerie also caught many, many run-of-the-mill errors—name spellings, dates, places. But she did it with a sense of humor, which I always appreciated, because I feel bad enough when I make a mistake. A few years ago, I wrote a feature and referred to one of the women in the story as being 54 years old. ‘You might owe her an apology,’ Valerie wrote on the fact report. ‘She’s only 53.’”—Mimi Swartz, executive editor