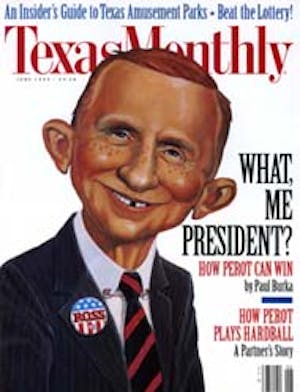 Texas is crawling with insects—literally. It’s not just that an estimated 37,000 different species can be found here (although we do have more than any other state). It’s the frequency with which we’ve seen them—many of them, at least—during the past year.

What’s behind our entomological explosion? The rain has a lot to do with it. Texas weather has been particularly wet of late, a fact that is music to the antennae of most insects, who feed off the plant life that thrives in such conditions. Another reason is the state’s varied topography. Just as Texas’ terrain is different enough to suit city folk and country folk and everyone in between, so too does the land attract insects with diverse environmental tastes. If a creature isn’t happy living in the pine flatwoods woods, magnolia swamps, or thickets of East Texas, there’s always the evergreen scrub to the south, the ponderosa forest and bear grass to the west, or the sage brush and oak mottes to the north.

Given the confluence of these circumstances, it’s likely that the rest of 1992 will also be a bug bonanza. So you may as well get used to the little critters—and even get to know them. Or put another way: If you can’t beat ‘em, meet ‘em.

When you find one of these black and white speckled longhorn beetles on a tree, you usually find several of them—as many as half a dozen hunkered down together. The voracious grubs bore tunnels in the wood, eating as they go. Adult borers, especially, like to hang out around big old cottonwoods, waiting for a mate. Range: Southeastern sates, Texas, and Mexico.

A terrorist of the insect world, the robber fly cruises the airways looking for abductees. When it finds a suitable bee, butterfly, or wasp, the fly grabs it with its feet, injects digestive juices using its syringelike beak, and settles down on a twig for lunch. Less mobile but equally carnivorous, its larvae feed on grasshopper eggs and beetle grubs in the soil. Range: Texas to Arizona.

As agile as a seal, these bullet-bodied amphibious beetles mostly inhabit stagnant ponds, where they benignly feed on algae, decaying vegetation, and the occasional dead earthworm. Their larvae are another matter: Carnivorous and cannibalistic, they gobble up worms, leeches, tadpoles, and fish. Range: Southern Canada through the United States to Mexico.

You always know when the tropical ox beetle pays you a visit: it lands with a resounding thud on your window. But those flights could be coming to an end. This espresso-colored rhinoceros beetle is being devoured by fire ants. The agile ants swarm over the plodding beetle, nipping through membranes in its armpits. Soon, only its exoskeleton remains. Range: Gulf states to South America.

More primitive than beetles, more closely related to grasshoppers than the praying mantises they resemble, these gray-green monsters live in the tops of oak trees and dine on leaves. From their aeries, they drop seedlike eggs that grow into small versions of the adults, forgoing the larval form of more evolved insects. They succumb when the weather turns wet and moldy. Range: Louisiana to Big Bend.

Striped in muted pink, gray, and green, this hawk moth sometimes flies a thousand miles before it gets comfortable. Hovering after dark at tobacco flowers and four-o’clocks, it sips nectar through its long, flexible tongue. As a caterpillar, its tastes become more refined—grape leaves and related vines. Range: South and Central America to Texas, occasionally farther north.

At night, ground beetles scurry around in search of dinner—mostly cutworms and other caterpillars. The above specimen, glossy black with blue highlights, is a subspecies found only in Central Texas. Clad in black platelike structures, its white-bodied larvae seem to be wearing Japanese armor. Range: The main species occurs from Oklahoma to Ontario and Florida.

Often found under the bark of rotting logs, the click beetle capitalizes on surprise. By bending its body and abruptly straightening it out, it makes an audible snap that can startle a bird into dropping the insect from its beak. The same mechanism can flip the beetle into the air if it has somehow ended up on its back. Range: Kansas through Texas into Mexico.

A thoughtful parent, this digger wasp guarantees that its babies never go hungry. First it paralyzes a cicada with its venomous sting and buries it; then it lays and egg at the base of the comatose insect’s leg. When the wasp larva emerges, it burrows into the cicada’s belly—which provides a food supply that lasts for weeks. Range: New Jersey and Florida to Kansas and Texas.

Canary yellow with jet-black bands and splashes of blue and russet, the two-tailed tiger is the largest butterfly found north of Mexico (the largest individuals are found in Central Texas). The Aztecs called it xochiquetzalpapalotl and regarded it as an earthly personification of their primary deity, the Plumed Serpent. Range: Alberta to Guatemala and Central Texas to California.