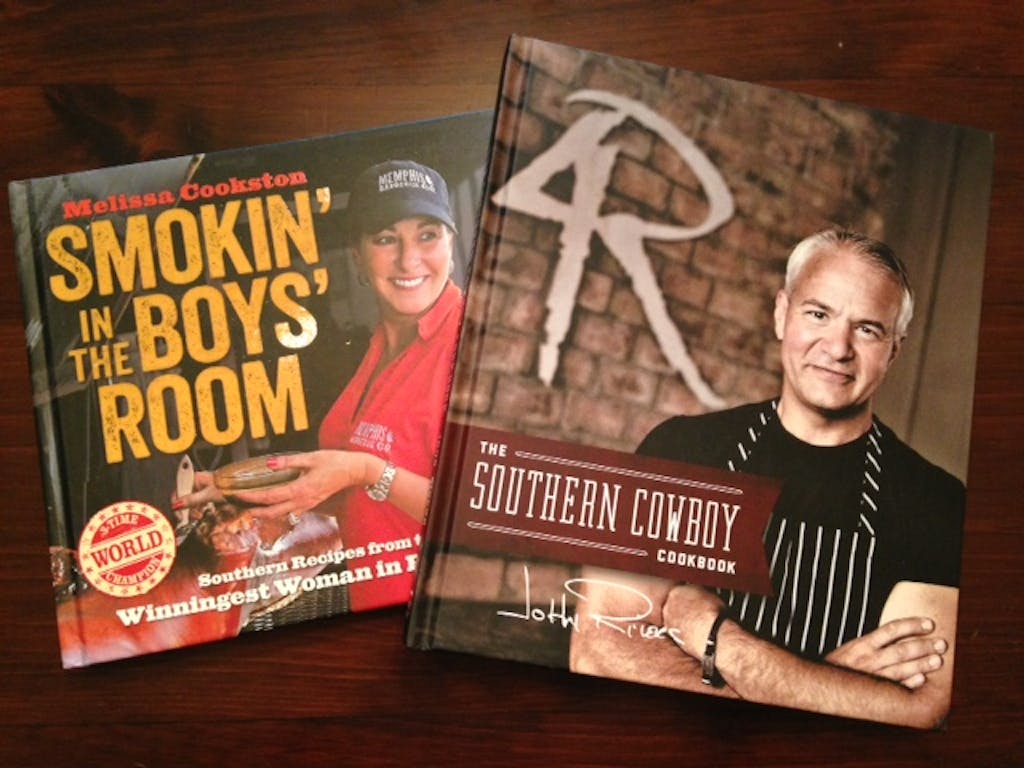 To say Melissa Cookston has been successful on the barbecue competition circuit is an understatement. As she describes in the introduction of her new cookbook “I am the winningest woman in barbecue, and frankly, it’s not even close.” But, as she also points out, there isn’t a female BBQ circuit. She competes against the big boys, and beats them regularly, especially when it comes to whole hog. She has won that category at Memphis in May in 2010, 2011, and 2012, seemingly grabbing the torch from the “Winningest Man in Barbecue,” Myron Mixon who last won the category in 2007. Her place in barbecue competition history is solidified, and these days that means you get to write a cookbook.

Cookston’s new cookbook Smokin’ in the Boys’ Room (Andrews McMeel Publishing, 2014) was released last week. I received a review copy from the publisher and I immediately went searching for Cookston’s competition barbecue secrets. That’s right where things lead off with a series of secret (until now) rub recipes and seven different barbecue sauce recipes (alright, one is a glaze) right before the competition baby back ribs are revealed. The steps for the ribs are familiar: Rub the meat, smoke uncovered, wrap in foil with more sugar and fruit juice, unwrap and finish on the smoker. If you’ve seen any competition cooking on television, there won’t be any surprises here, except for maybe the grape juice taking the place of the standard apple juice.

Things don’t really get interesting until you find the six full pages dedicated to whole hog cooking. The detailed directions here read as if you’re getting some real inside information. Knowing how to prep the animal, and then being able to properly test for doneness are the real keys to pull off a successful whole hog. It’s also humorous to read Cookston’s unfettered joy at using her reciprocating saw to remove the trotters. Just be sure to buy a few rolls of foil with your hog to essentially mummify it during the bulk of its cooking time.

Once you get to the sides the originality seems to wear off. After recipes for macaroni and cheese, deviled eggs, and fried green tomatoes that look like they could have come from the first hit of a Google search, it seems like they just needed a little filler to get to the one hundred recipe mark touted on the back cover. Then again, a book like this should be judged on the barbecue recipes. Cookston passes that knowledge along successfully. You might not find it all terribly original if you already have a library full of other barbecue competition cookbooks, but this is as good a place to start as any.

That’s the stark difference between this competition barbecue cookbook and another recent cookbook from the commercial side of the barbecue business. The Southern Cowboy Cookbook (Story Farm, 2013) came out quietly late last year. It includes recipes used by pitmaster John Rivers both at home and at his restaurants. Rivers success is evident in the popularity of his 4 Rivers Smokehouse chain in central Florida which specializes in Texas-style barbecue. The original in Winter Park opened in 2009 and they’ve already expanded to five other locations.

Rivers’s cookbook is saturated with hunger-inducing photos and unique recipes. Instead of a generic recipe for fried green tomatoes, these are topped with Diablo shrimp and mango salsa. Collard-infused cheese grits, smoked leg of lamb, and stacked chicken enchiladas verde are all approachable for the home cook, and original in their execution. Ending the meal with a bread pudding recipe would be simple enough, but using leftover Krispy Kreme donuts for the bread is a twist I wouldn’t have thought of (and my cardiologist is thankful for that).

Where Cookston spends real estate on whole hog, it’s brisket that gets its six-page spread in Rivers’s book. Texas-style barbecue is what 4 Rivers specializes in, after all. All of the steps provided are solid until Rivers suggests that briskets are to be treated equally one to another, and will all reach optimal doneness at the magic 190 degree internal temperature. Judging doneness by feel takes some experience, but is far more successful than using a thermometer.

Some of Rivers’s recipes get a bit too cute. Hickory-smoked, rioja-infused manchego croquettes are as complicated as they are precious, but if you’re trying to win customers over to your barbecue catering business, this might be the recipe that does it. And I guess that’s the point. If you want to entertain or you’re looking to infuse some life into your barbecue joint’s menu, then The Southern Cowboy Cookbook is a good place to start. If your goal is simply to have success in the barbecue competition world, then let Cookston be your guide.