Sometimes the difference between good barbecue and bad barbecue is just a small tweak away. In the case of Big D Barbecue in Mansfield, that tweak can actually be physically measured—and it’s a mere eighth of an inch. Given the staff’s passion for barbecue, each time I returned I hoped to find something to praise, yet I always left disappointed. After almost two years away, I stopped in again to find my hopes realized.

The restaurant is located in a tough spot—between Dallas and Fort Worth, but not really close to either city (Big D’s name is an homage to the owner’s grandfather, Big Daddy, not Dallas’s nickname). It’s a small place now (it was even smaller when owner Jordy Jordan opened it in 2013), but a renovation six months ago, created some big opportunities. A new bar anchors the rear wall, and it’s lined with enough taps to make any beer nerd happy. Eventually, some of those taps will feature Big D’s own brews after Jordan opens his Cowtown Brewery project in Fort Worth. But for now, his team is just making barbecue.

The meat is all smoked in a rotisserie smoker that sits just behind the ordering counter. It’s a stainless steel Ole Hickory, the same one that’s always been there, so I didn’t expect the barbecue to get any better. After happily devouring the entire menu, I was dumbstruck. What had changed?

“We were throwing wood on and closing the fire box,” Jordan told me, referring to the way they used to run the Ole Hickory. “It was choking the fire out.” So, contradictory to the manufacturer’s instructions, Jordan said they now crack the door open an eighth of an inch during the cook. “It allows some air flow to come in,” which, he explained, “constantly keeps the fire burning, so it doesn’t smolder.” (Aaron Franklin used the same trick several years back when cooking on an Ole Hickory in New York.) A overly smoky, creosote flavor was my complaint of Big D previously, and this simple change eliminated the problem. 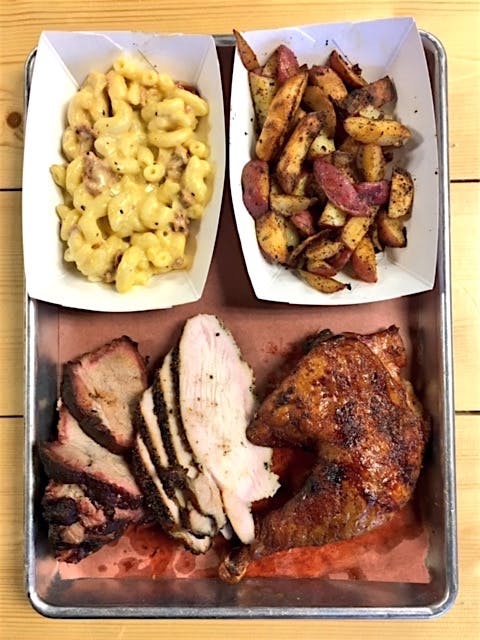 A chicken quarter that in 2015 had left my lips tingling with the flavor of ash was now perfectly balanced between smoky, salty, spicy, and sweet. The thigh was ridiculously juicy with crisp skin. Turkey breast gets a rub heavier in black pepper, and it too was tender and moist with just the right amount of smoke. Throughout the meal, the description that kept coming to mind was well-balanced—and spicy.

The ribs get a boost from dried red peppers in the rub, according to Gary Giddings. He’s the face (and beard) you’ll likely see when you order at Big D. He said they never use paprika, but instead prefer ground peppers like chimayo and panca, which lend their spice to the tender baby backs and the pork country ribs. They cut strips of pork shoulder to make the country ribs, then slice medallions to order. These luscious nuggets of smoky pork will have you wishing more folks would ditch the pulled pork in favor of country ribs.

Giddings is helpful with recommendations behind the counter, and also quick to respond to complaints. The first batch of slaw I got was a bad batch, with so much salt it was inedible. Giddings was back in five minutes with a new tray loaded from a fresh batch he’d just made after throwing out the old one. There were no such complaints for the rest of the sides. Chunks of red-skinned potatoes were seasoned and fried on the flat top for excellent “skillet potatoes.” The same red skins show up in the homemade potato salad, heavy on the mustard and egg. Pinto beans were a bit soupy, but got a good kick from sliced jalapeños. The creamy mac-and-cheese was studded with enough of their black pepper sausage to make a meal on its own. 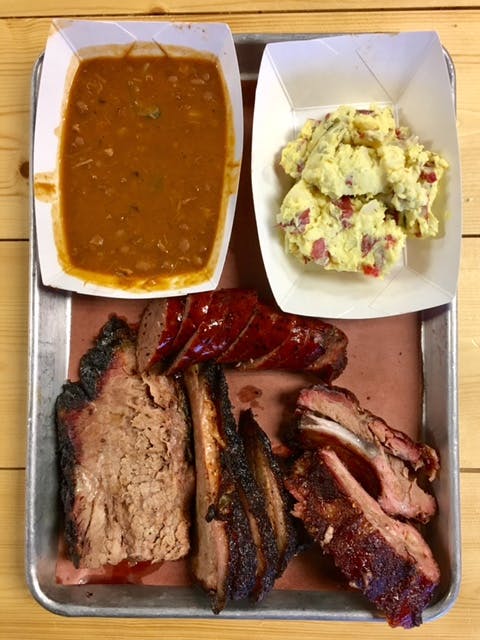 Giddings said they go through about fifty briskets a week. Slices from the lean and fatty side were both good, but I preferred the thinner slices from the lean side that still had a nice fat cap. It could have been more moist, but this was solid smoked brisket with good smoke and a properly restrained level of seasoning.

Big D now makes its own desserts in house. Jordan thought they could make them cheaper and better than the bakery that had been delivering them daily. He’s right on the quality. Creamy banana pudding would satisfy any connoisseur, and the apple cobbler was like a love child between a spice cake and an apple pie. It’ll be hard to choose next time. 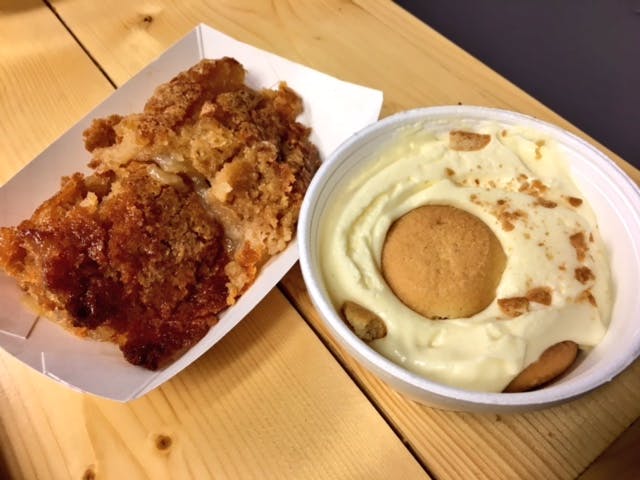 Big D Barbecue is proof that perseverance in barbecue pays off. The team here kept trying to improve, and it paid off. Just goes to show that a small tweak can make, ahem, a Big D(ifference).