You may remember from the first review that City Meat Market, in Giddings, makes their own sausage for the market as well as providing it to Snow’s. After trying it at Snow’,s we wanted a good comparison of not only the sausage but the brisket as well. I enjoyed my first trip here enough to give it four stars, and they were kind enough to display the certificate I sent right next to their mention in Texas Monthly‘s 2008 Top 50 Barbecue Joints issue. 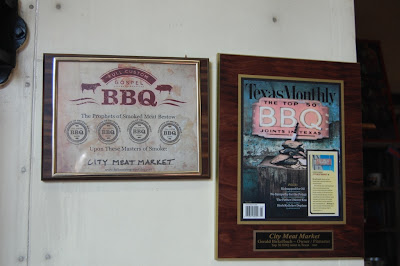 The meats together just didn’t have the same moist and tender quality of Snow’s, even the sausage. It was a bit less smoky and quite a bit dryer. It was again amazing to see just how different the same raw links can taste after a few hours in different smokers. Brisket and ribs were better than the photo reveals. The beef slices were thick with a nice line of fat but were oddly sliced with, rather than against, the grain. Even the most tender brisket will be tough to chew when sliced in that way. Ribs had great seasoning and flavor and were the smokiest meat of the bunch, but they were a bit dry. I should have asked for some longer ribs near the center of the rack, which is possible here since you get to watch as your order is being sliced right in front of you. 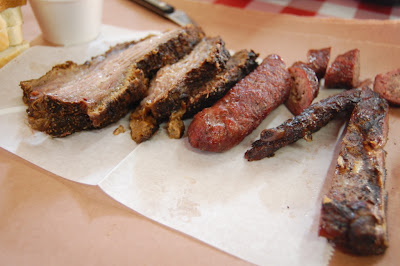 While it wasn’t quite as good as the first trip, it was close and would have been much better given more careful slicing of the brisket. I like this place and plan to return in hopes that it will produce an experience more like the first visit.