Back in April, I gave El Paso some tough love. I had tried and failed to find good barbecue there, and I wrote about my futile search in an article called “BBQ in Far West Texas? I’ll Paso.” With a headline like that, it’s no surprise that the piece resulted in more comments than any post ever published on TMBBQ.com. The protestations didn’t bother me; I knew I’d change my mind when the city changed it’s quality of barbecue. And, I must say, El Paso has risen to the challenge.

Let’s start with Richard and Suzanne Funk. I met them in a meat locker at Texas A&M Rosenthal Meat Center, where a barbecue town hall meeting had been arranged. The Funks, who had aspirations of opening a barbecue joint, were there with some of the state’s finest barbecue restaurant owners to see exactly what they were getting into. The Funks’ opening date was still months away, and their naiveté was showing. They asked me, “Should we get a Twitter account?” I laughed as I recommended they do so. A food truck without a Twitter account might as well not bother with wheels. 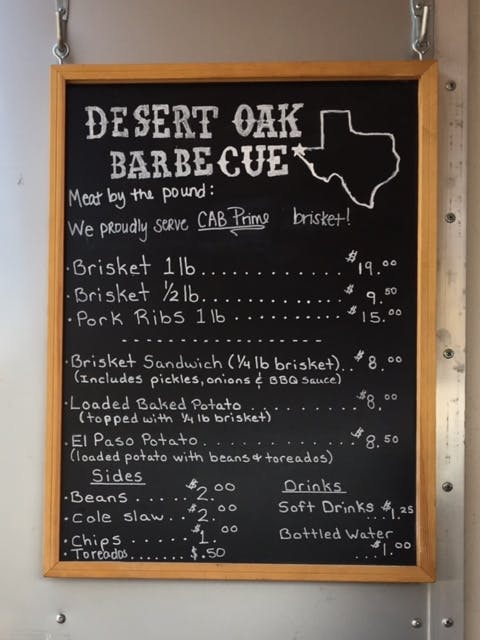 They opened Desert Oak Barbecue in July, and consequently, it’s still in its infancy. But it’s a bit of a wunderkind. When I showed up this past week to try the selections from their small menu (brisket, pork ribs, a brisket sandwich, and a couple of loaded potato options), the brisket cross section on the cutting board caught my eye. 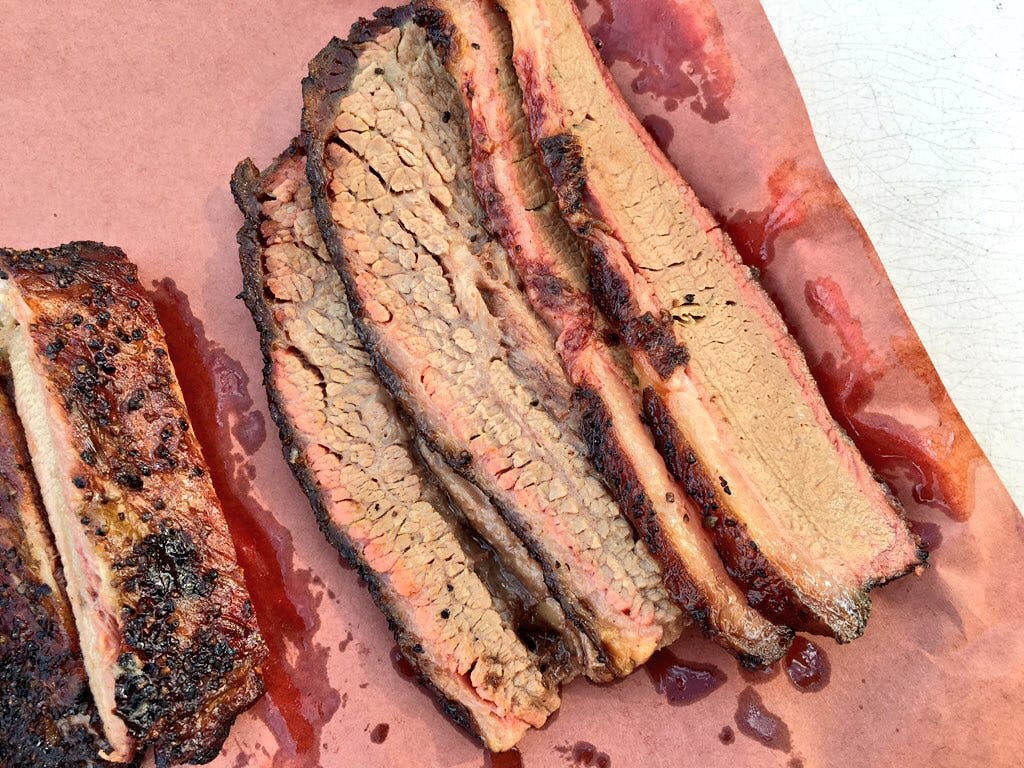 It was a juicy, peppery slab of beef from the Aaron Franklin school of barbecue, that is simply seasoned, smoked over oak, and wrapped in butcher paper to finish. It’s also light on the smoke and heavy on the salt. Slices from both the lean and fatty side are exemplary, but they better be when it’s one of only two meats offered. 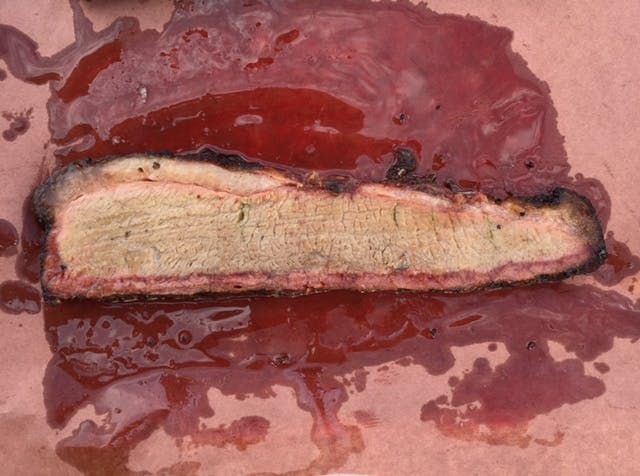 It’s brisket that will keep folks coming back as long as El Paso is willing to fork out $19 a pound for brisket. My dining companion, Michael, who is a local El Pasoan, said one commonality among the barbecue joints in his city is that they’re all dirt cheap. But he loved Desert Oak and is hoping the rest of the city appreciates the quality (they’re using CAB prime beef) enough to pay up. 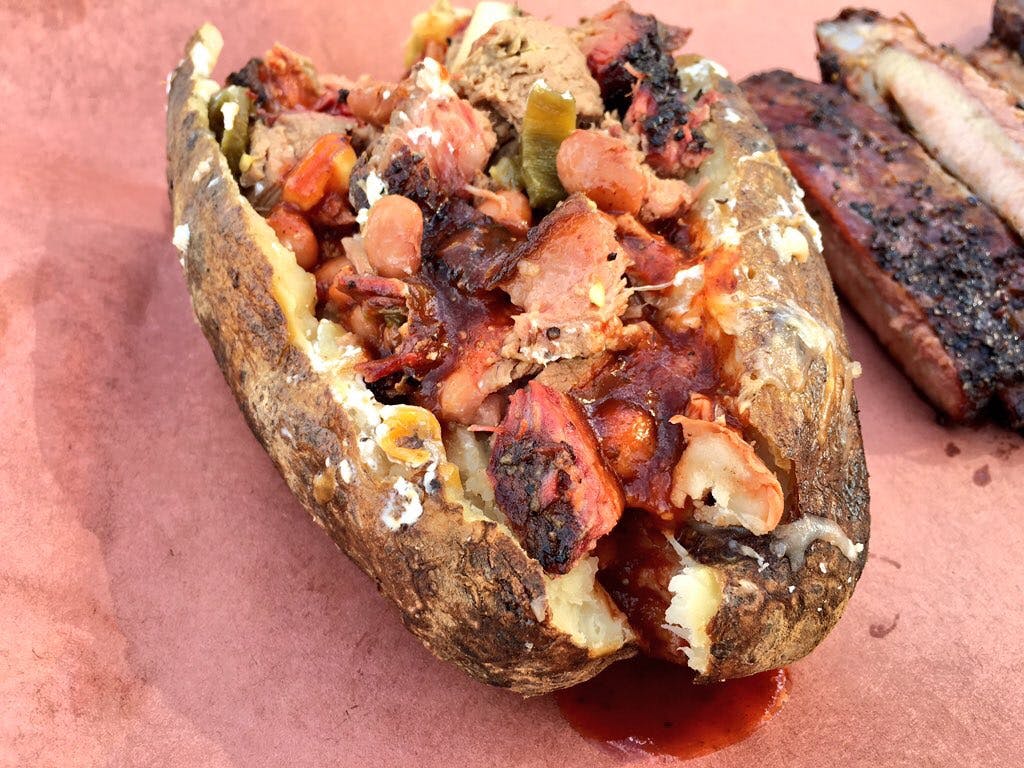 You can also get the brisket in a sandwich or a baked potato. I went for the local flavor provided by the El Paso potato. Cheese and brisket was mixed with grilled onions and jalapeños. The whole thing was topped by pinto beans, and I added sauce. Richard doesn’t much care for barbecue sauce, but he makes one from scratch anyway, and it’s quite good. It’s not too thick, and not too sweet, with a vinegar bite. It goes well with the brisket, and was great on the potato. 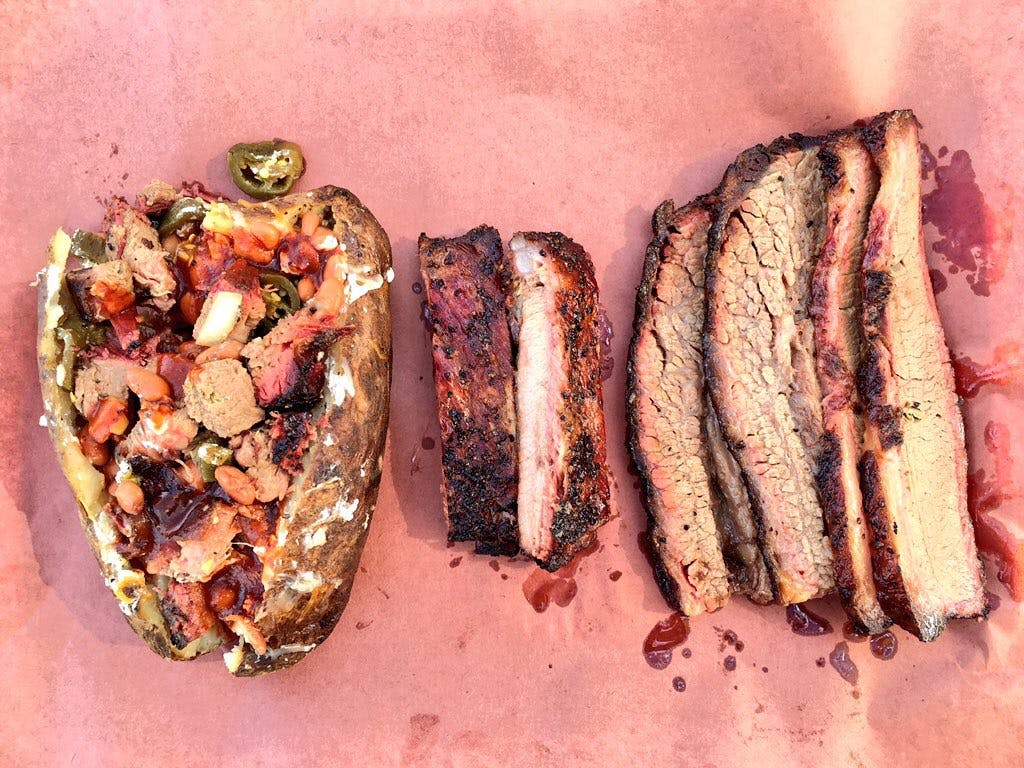 At $15 per pound, the St. Louis cut pork ribs are a cheaper option, but still great. They have a pleasant saltiness, and a black pepper bite. I would have loved them a touch tighter, but the incredibly tender meat stayed on the bone long enough for the first few bites. 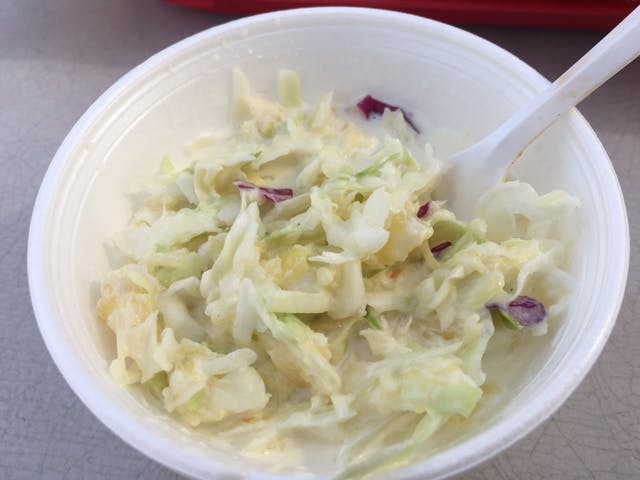 There’s no dessert, and the only sides are the very basic pintos and slaw. The soggy slaw has far too much dressing, and enough pineapple to be mistaken for ambrosia. I’d stick with the meat.

With a scant selection of menu items and just two services per week, the Funks have a ways to go before they reach their ultimate goal of opening a bricks-and-mortar restaurant. A new, larger smoker is coming soon, and they’ll add Thursday lunch to their schedule next month. They’re also looking for a location that’s easier to see from the road. (The truck currently sits up on a hill between Cowtown Boots and Cowtown Discount Liquors with only a fence-mounted banner marking their location.)

El Paso has seen an influx of new barbecue joints in the last several months. I tried as many as I could on this latest visit, and while I found a few interesting menu items, it was Desert Oak that’s solidly at the top of the heap. Hopefully the rest of the city discovers what the Funks are cooking, and we’ll see what they can do with a few more menu items. From what I tried, we have reason to be optimistic.