For all chefs, there are moments in their culinary careers that forever shape them. Moments when principles are seared into their brain by mentors, books, or classes only to manifest in their cooking techniques for life. For Travis Heim, owner and pitmaster of Heim Barbecue, in Fort Worth, one of those illuminating experiences came early in his career, during a two-week stint at a now closed barbecue joint in the mid-cities of the D/FW area.”They would marinate brisket overnight in liquid hickory smoke, and then apply a very liberal rub of Lawry’s,” he told me recently, laughing at the memory. “It was rough.” He simply couldn’t treat barbecue that way, and he quit.

He quit the place, but not the cuisine. Earlier this year, Heim and his wife, Emma, took a leap, and opened their own barbecue trailer next to Republic Bar, in Fort Worth. Using money they collected from a few “Meat Club” fundraising dinners, they started Heim Barbecue as part-time gig, with just two services a week. Success came quickly, and now they’re open on Fridays, Saturdays, and Sundays at 10:00 (Thursday service starts on 10/22). Their popularity is evident. Unless you get there early, you’ll probably see the line of people before the trailer. Prepare to wait. 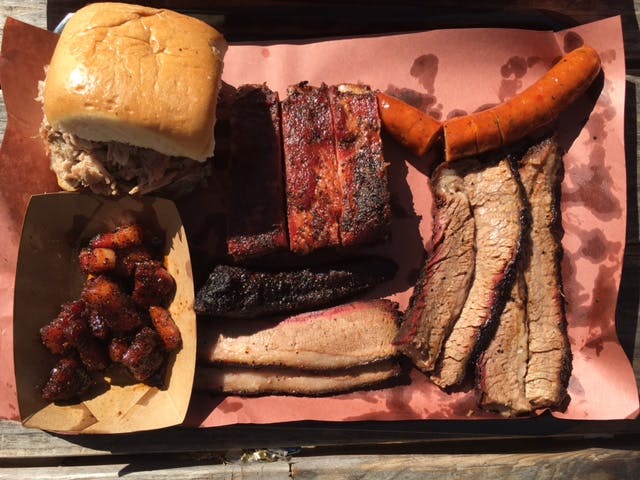 They deserve the attention. Over several visits, I’ve witnessed the evolution of the quality of Heim’s barbecue. With each meal, service has become better and better, an impressive feat when you consider the relatively steep learning curve the Heims had. Neither of them had experience running a restaurant, so they had to figure it out on the fly. Early on, production was a challenge. They were cooking ultra-small-batch barbecue because they didn’t have much room in their single smoker (they added a second and a third is on the way). As Heim’s reputation grew, the business struggled to meet demand. The line became excruciating not due to its length, but because of its glacial speed. It was like a being in the express line at the at the grocery store, but everyone in front of you had forty items, a stack of coupons, and a checkbook. I counted one morning as the first ten orders were filled in fifty minutes. This past Friday things moved more swiftly, but don’t expect to get in and out on your lunch hour.

While my primary gripe is with the line, I am compassionate to why it’s a problem. They’re operating with a bare-bones staff (just the Heims and their cook Rowdy), something that will likely change when they open a permanent location in Fort Worth’s West Magnolia development next year.

In the meantime, I wouldn’t suggest holding out that long before you get some of their barbecue–especially the bacon burnt ends. 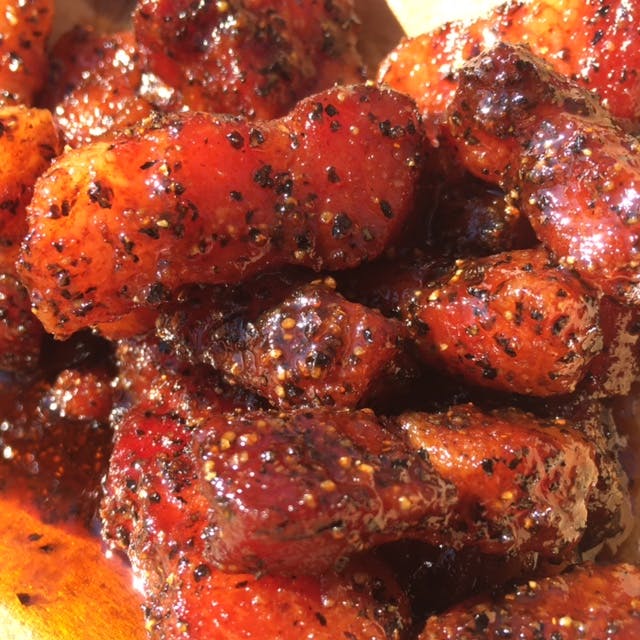 For the bacon burnt ends, Heim smokes a pork belly, cubes it, then coats the cubes in sugar-heavy rub. They become sweet, fatty, bite-size nuggets of smoked meat that are at once chewy and juicy. The texture is like that of a well-made pork skin cracklin’. They’re addictive on their own, but they also liven up just about anything, like the pulled pork sandwich, which could use a little zest of some sort. The pork in the sandwich is juicy and tender, but lacks zip, which a few bacon burnt ends easily provide. A little sauce–thinnish, dark, and a little sweet–works well too. 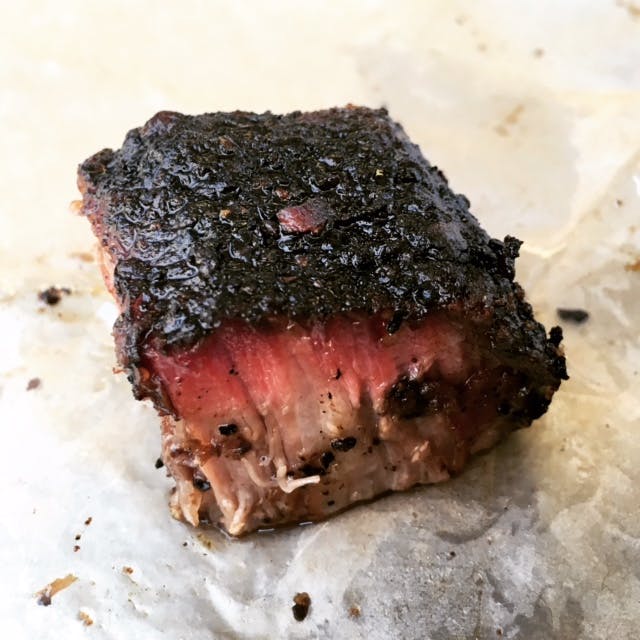 What needs no adornment is the brisket. Heim gives out a cube to each customer, and the one I got was a perfect bite of fatty brisket. The slices are equally as impressive. Lean slices are a tad drier than I’d like, but it still has great flavor and line of nicely rendered fat running the length of every slice. The fatty brisket slices are imbued with melted fat to the point of decadence. Heim has also got his slicing down. The uneven and over-thick slices from previous visits have been replaced with evenly sliced brisket without much discernible room for improvement. 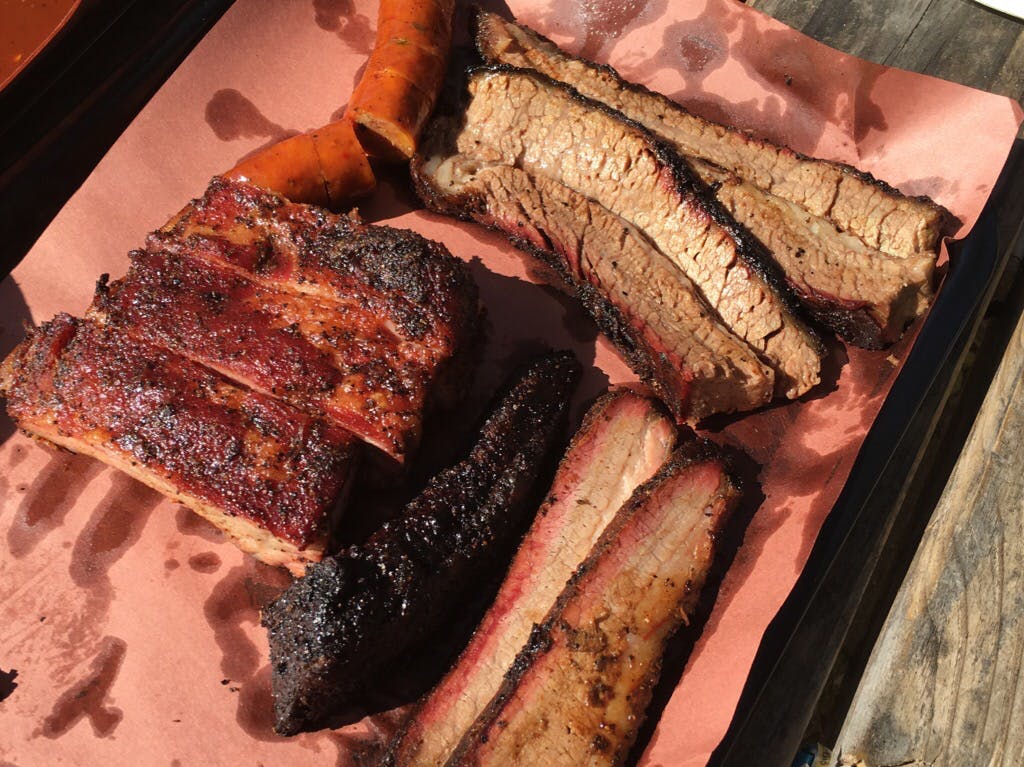 The menu is small. You won’t find a poultry option, and there’s only one sausage, a jalapeño-cheese variety. If you want a taste of three items together, the sausage, brisket, and bacon burnt ends are all featured on a $13 sandwich called the @BBQsnob, a nod to my Twitter handle. I appreciate the namesake (though, I must say, it in no way taints my assessment of the food), but if I were a usual at Heim Barbecue, it would be the pork ribs on my tray every time. There’s a little sweetness in the salty rub, with just enough pepper and smoke. They also exhibit the exemplary doneness of a pork rib that’s not tough, but not falling off the bone either. 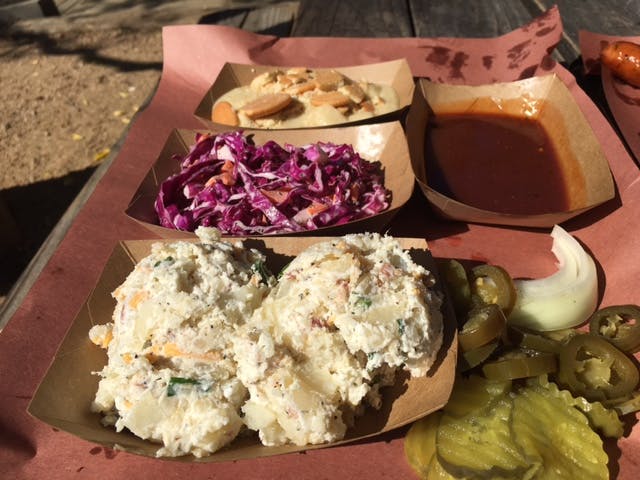 Just like with the meats, the sides are also limited. The slaw is a simple dish of thinly-sliced red cabbage coated in a dab of vinegar, a stark contrast to the decadent potato salad, which is loaded with bacon, cheese, and green onions. I prefer it to the slaw, but the banana pudding (the only dessert) topped with crumbled Nilla wafers, beats them both.

While it’s been fun seeing this business progress into one that serves some of the best barbecue in the Metroplex, I’m excited to see how it matures from a trailer to a brick-and-mortar. Hopefully the menu expands and those lines move a little faster. Two things are for sure: Heim won’t switch over to liquid smoke, and the bacon burnt ends aren’t going anywhere.