It’s important that Iron Works serves good barbecue. As a barbecue joint in downtown Austin, one that is just steps away from the convention center, I’d wager that more Austin visitors get their first taste of Texas barbecue at Iron Works BBQ than anywhere else. General manager Aaron Morris agrees. “Something that’s been a focus of my time here is to give the best representation we can,” he told me while I ate a plate of sliced brisket. After three visits over the last few months, I can agree. Visitors to the convention center, or barbecue fans from anywhere else, can get a solid version of Texas barbecue at Iron Works.

The building began as a literal iron works in 1935, when German immigrant Fortunat Weigl Sr. built the place. Charlotte Finch bought the building and opened Iron Works BBQ in 1978. The metal building with tall ceilings and wood floors made for a perfect barbecue joint interior. To this day, Iron Works just has “the look” that you expect to go along with smoked meat. The first pit was acquired when they bought the business next door. Tommie Haffelder served fried chicken and barbecue at The Shanty from 1953 until he retired in 1973. Their brick pit became Finch’s kitchen. Morris said that lasted about fifteen years until, eventually, it “crumbled and fell apart, and you can’t rebuild something like that in the middle of Austin,” he said. They switched to an Ole Hickory rotisserie, and now have several.

Morris is Finch’s nephew, and she asked him to come work for the family after his stint at Salt & Time in Austin. That was four years ago, and the barbecue is better for it. It had been longer than that since I had last tried Iron Works, so I was surprised how good the sliced brisket was when I stopped in on a whim several months ago. There was fat and a black crust on the juicy meat, something I hadn’t found there before. “One thing I noticed was that back in the day it was lean, lean, lean. Now the tastes have changed,” Morris noted. That was the case with the customer in front of me who waved off the meat slicer as they prepared to get him some lean brisket. “I want it all marbled,” he instructed. 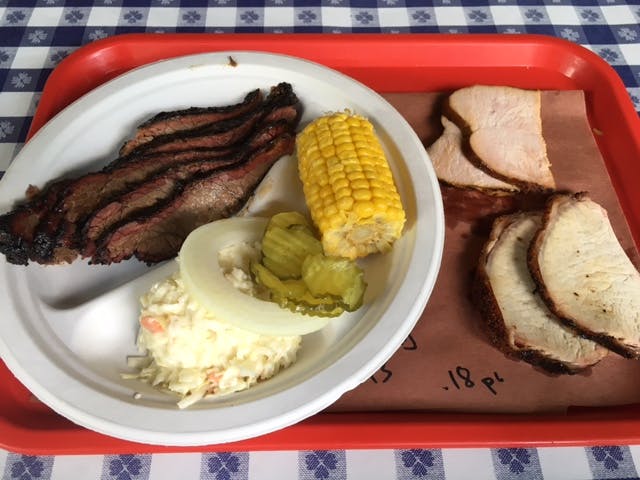 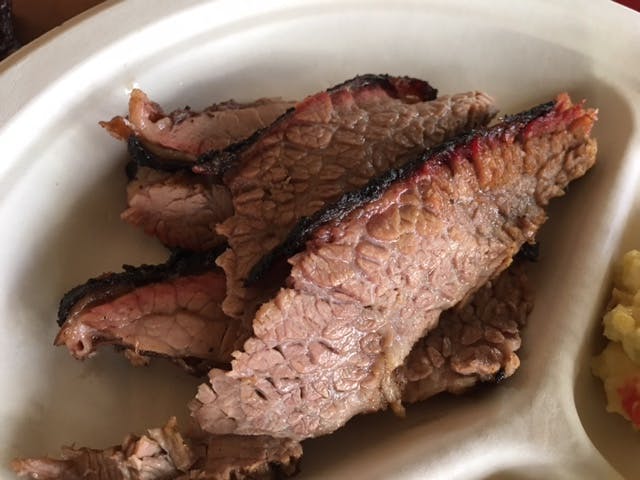 The brisket was very good over three visits. Morris uses all prime beef, and on Tuesdays he switches to Creekstone beef. Creekstone briskets meet halal requirements, and Morris already dedicated one of his smokers to beef. Now he’s a hit with the halal community on Tuesdays. “One thing that’s important to me is the hospitality,” Morris reiterated more than once. “This is family food.” If they can accommodate someone, then they want to do it, even if that means smoking tofu, as they do every year during SXSW. 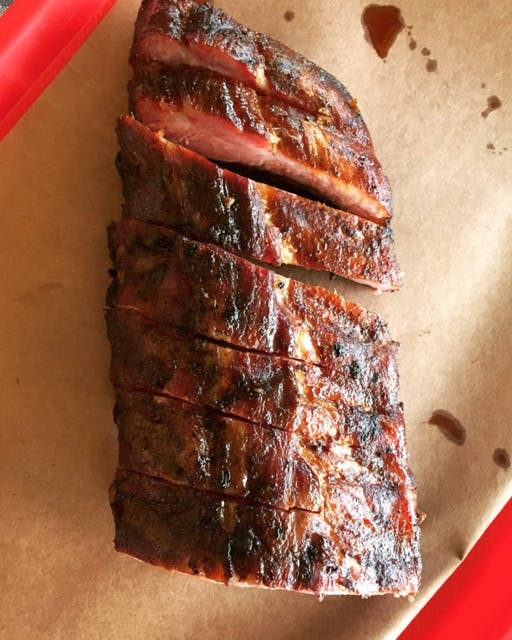 The brisket is worth stopping in for, but it’s the pork ribs that I liked best. A sweet rub covers the baby backs that are smoked to a point of ideal tenderness. The beef ribs are a big seller, especially as part of the $17 Sampler Plate which includes brisket and sausage. These are back ribs, so while they’re still large, but don’t expect a pound of meat on each bone. To ensure a meatier rib, they do cut away every other bone, so each rib they serve has double the meat. They’ve got good smoke and flavor, but vary greatly between tender enough to come off the bone, and tough enough to give your teeth a workout. 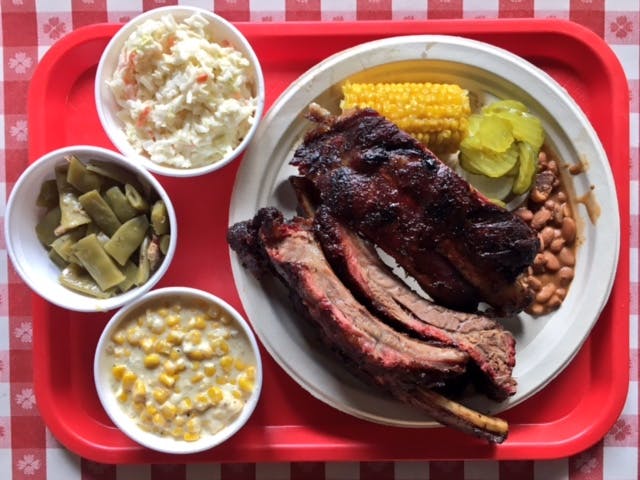 We can obsess about every meat in its purest form, but this is a primarily a spot for the lunch hour crowd. This is where they excel at items like the baked potato stuffed with brisket and cheese, and the chopped beef sandwich. Ask for the beef chopped on the block. The sandwich is beautiful in its simplicity. The best deal is the sausage wrap. For just $3.05 a generous link the peppery sausage, a specific Iron Works recipe made by the local Smokey Denmark’s, comes on a slice of white bread with all the pickles and onions you can pile on. 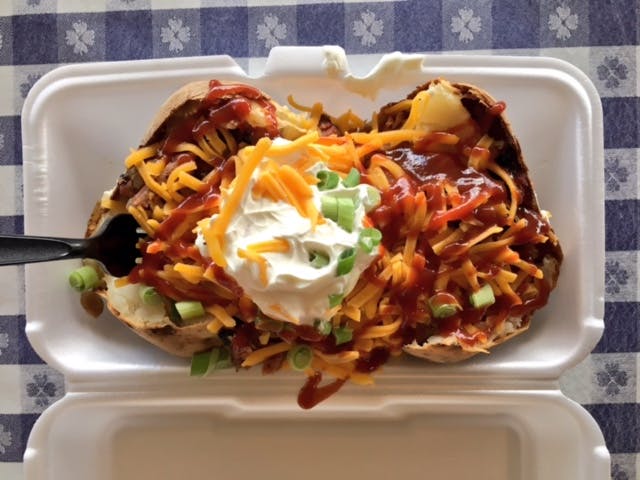 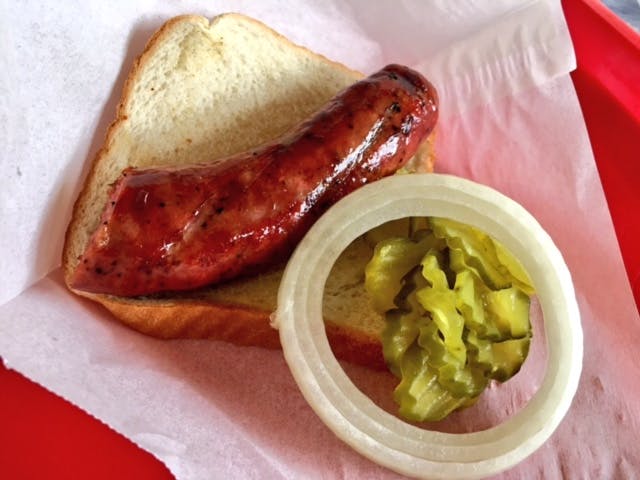 As for the rest of the meats, the smoked turkey breast is a standout, as is the juicy smoked chicken. Pork loin has been replaced by pulled pork, which was sold out when I tried to order it. 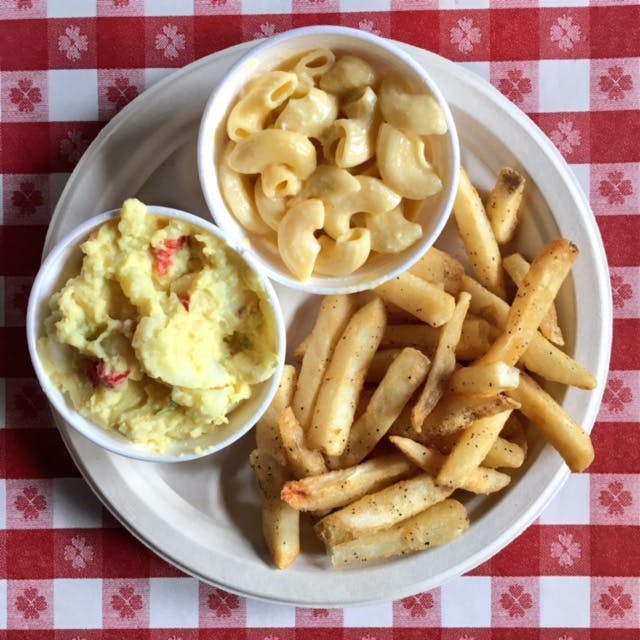 Iron Works has plenty of sides to choose from too, and on this visit, I brought along our SideKick. You might remember Christiane from her ranking of Texas barbecue sides. Her motto is, “I like the meat, but I come for the sides,” and she had some thoughts about the sides at Iron Works:

French Fries – Big and thick, like the size of a finger. Nicely seasoned and crisp. Especially good for fries held under a heat lamp.

Potato Salad – An inoffensive potato salad. I like the chunkiness. They do it well.

Slaw- I used to love mayo. As I’ve gotten older I like it less and less, but this is actually really good. It’s crunchy with that tang, and is nice and cold. They take their cole slaw seriously.

Green Beans – They taste like salt and the can they came in.

Pinto Beans – Good beans. They have a kick.

Corn on the Cob – I was a connoisseur of corn, aka a cornoisseur, growing up. This doesn’t look fresh. It’s like biting into a deflated balloon.

I agree with her mostly, but I really enjoyed the classic mustard potato salad that’s heavy on the egg. Morris agrees. “The potato salad is the most under-appreciated side because it’s so labor intensive.” The desserts are great too. Peach and apple cobblers, which I preferred over the pecan pie, are portioned out by the register, and are usually still warm from the oven. 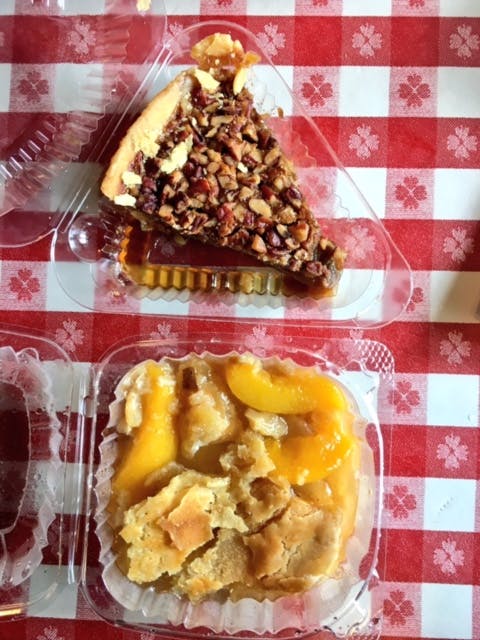 Since the opening of Franklin Barbecue in 2009, there has been a big shift in Austin barbecue. Established spots like Iron Works are often left out of the current discussion. I asked Morris how it felt to constantly hear that Austin wasn’t known for good barbecue until very recently. He was diplomatic. “In general, the Texas barbecue boom has been good,” he said, and he knows that’s there a place for old spots like his in the mix as long as they stay focused on good smoked meat. “This is Central Texas, and the meat should stand on its own,” he reminds me, while admitting they haven’t bothered to add black pepper to the rub yet, and don’t plan to. No matter, Iron Works is putting out some good barbecue, and it might just be time to rediscover it.