John Raven of Johnson City, Texas was a writer, a pioneer in the barbecue and chili competition circuit, and a part-time daredevil. He passed away January 15th at the age of seventy-six. 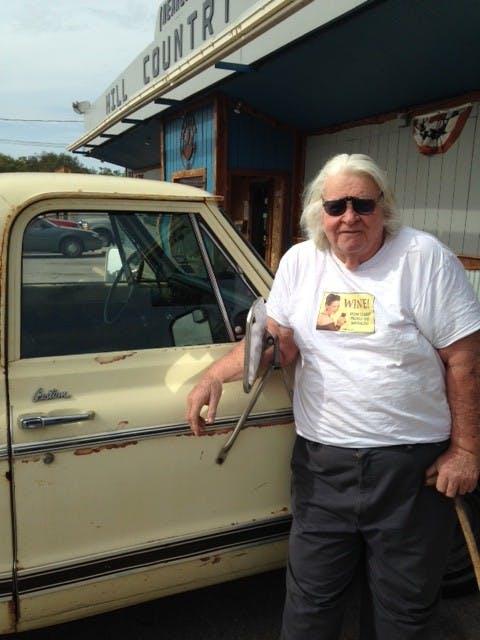 Raven was outspoken about his contributions to barbecue, and valued flair over humility whenever possible. “I know more about barbecue than anyone,” is what he wrote in the first letter to the editor I received at Texas Monthly. He was asking to be interviewed, and we met a year later over a chicken-fried steak in Johnson City. He wore a shirt that read “Wine. How classy people get s—faced.” He never acknowledged the shirt, which typified his dead-pan style of humor.

During the interview, he told me he invented event promotion as it’s done today, and a few other things that’d be hard to prove to a jury, but his contributions to barbecue weren’t trivial. In 1984 he organized a barbecue competition in Texas called the Tournament of Champions, and competitors had to qualify to be invited. This was unheard of at the time. Barbecue competitions were pure novelty back then. The KCBS had not yet been formed. Now they’ve become the dominant force in the competition world with hundreds of contests every year and events like the American Royal and The Jack serving as their own tournament of champions.

Raven got his start in barbecue competitions in the seventies in his hometown of Taylor, Texas. As Tim Mikeska, of the famous Mikeska barbecue family, recounted, “John took barbecue judging very seriously, more than anyone did back then. He would bring a notepad to the judging table and write notes about everything he sampled. Then, he would interview the other judges at his table and ask them why they liked certain entries.” He was a regular at Mikeska’s Barbecue, remembers Tim. “My earliest memory of John in the mid 60’s was him coming, almost daily, into one of my dad’s four barbecue joints in Taylor and ordering 25 cents of sausage and a Big Red soda. He’d then grab a handful of crackers and sit and talk with the locals in Taylor for a long time. He loved to talk.”

After leaving Taylor, he bounced around Central Texas working construction and fixing cars before heading to Luckenbach, Texas. He called it his “spiritual home,” but he was homeless when he moved there. Raven lived in a barn while working odd jobs like mowing lawns, but he soon found a way to use his real calling as a showman, and bring back Bad McFad.

Former Luckenbach mayor VelAnne Howle remembers Raven and McFad fondly from those days. “He was a hilarious person.” As Bad McFad, an alter-ego twenty years in the making, he would shoot himself out of a cannon in Luckenbach. As Howle recalls, “it was really just three fifty-five gallon drums that they’d welded together. They lit a big smoke bomb, and he came out of it and rolled around.” He soon gave up his daredevil act and in 1993 he revived the Luckenbach Moon, a bi-monthly newsletter in the tiny Hill Country town where “everybody’s somebody.”

It was around that time that Raven began referring to himself as “The Commissioner of Barbecue.” His old friend and fellow barbecue personality Ardie Davis, aka Remus Powers, said he always assumed the title was self-declared, but Davis did eventually bestow a “Doctor of Barbecue Philosophy” or PhB upon Raven. Tim Mikeska recalls when he himself was awarded the title of “Commissioner of Barbeque” by the state of Texas in 2004, and he got a call from an agitated Raven. “He asked if I would be using the title ‘Commissioner’ and I said ‘No.’ He then replied, ‘Good. Then it won’t be so confusing.’ I still laugh about that conversation.”

VelAnne Howle spent time with John Raven during his final days. He didn’t take to confinement easily, and planned an escape from his nursing home, but only after repeatedly reporting his kidnapping to the local police. Raven wheeled himself out of the home at midnight in thirty-six degree weather. His freedom was short-lived when the staff found the wheelchair overturned on the sidewalk an Raven lying next to it. When hospice took over, VelAnne Howle, Kathleen Hughes, and the rest of the “Big Breasted Hill Country Earth Mamas” were there to comfort him. On his final day they called the local radio station and requested all of Raven’s favorites. After he passed, Ardie Davis quipped that “Bad McFad’s rocket has finally launched.”

To have a conversation with Raven was the only way to appreciate his humor doled out in a slow drawl. The best we can do now is to just listen, so I’ll leave you this video about the Hill Country that John Raven submitted to a Texas Monthly video contest in 2011. He’d appreciate us all getting a good chuckle out of it today.

*This story has been updated from the original with additional details from VelAnne Howle.