Ribs and rings in the Texas Panhandle are as ubiquitous as brisket and butcher paper in Central Texas. I look forward to battered onion rings almost as much as the barbecue (maybe more) when heading up north. They’re pillowy like the fried cod you’d get with a pub’s fish and chips, with just enough crunch in spots where the batter thins over the hefty loops of onion. They don’t have the crackle of floured onion rings, and there’s no messy flaking as bits of crust fall off. The tender onions within can be pulled out clean if you’d rather enjoy just the sweet, salty bracelet of fried batter. You’d never label them as onions strings or onion clusters—the Panhandle variety are true to their name, and they’re undoubtedly my favorite style of onion ring.

I grew up in Wooster, Ohio, where Bishop’s Drive-In was an institution. They tore it down in favor of a no-credit-no-problem used car lot, but before that we’d stop in at least once a week for burgers and doughy onion rings just like they make in the Panhandle. For a brief, wonderful time in Dallas, where I live now, Luscher’s Red Hots offered the closest rings I’d found to Bishop’s. It’s gone too, and the only folks left who seem to understand the superiority of this style of onion ring reside along a stretch of Texas between Pampa and Dalhart.

I spotted these golden Os stacked from across the room as my server approached my table at Old Sutphen’s Barbeque in Borger. Compulsive food photography is a hazard of the job, but I convinced myself that it’d still look like a full order as I plucked a ring off of the top and devoured it. These were my favorite onion rings on previous trip to the area, and they may have gotten even better. I picked over the ribs, sausage, and the unique chunks of saucy smoked beef, but left no trace of those onions rings.

I needed to know the history of these fried halos, so I did a little digging. The Sutphen family sold the business in 1999, fifty years after it had first opened. They passed on the recipes to the new owners, and Joey Sutphen, son of founders Joe and Marjorie Sutphen, assumes they haven’t changed anything with the onion rings. Sutphen travels across the country cooking on the rib cook-off circuit, but I tracked him down at his new home in Virginia. He said the onion rings had been a part of the menu from the beginning, but it wasn’t a family recipe. A Dallas barbecue icon had shared it with Joe, his father, before the restaurant opened.

Red Bryan, of the legendary Bryan barbecue family, ran the most popular barbecue joint in Dallas in the 1930s and 1940s. According to Sutphen, Bryan was feeling pretty generous with his intellectual barbecue property and agreed to share it with Joe. “They met for some reason at a gas station in Odessa,” Sutphen told me (according to the 1940 census, the Sutphens lived in Ector County). The story goes that Bryan provided several recipes, including one for onion rings.

David Harris—who ran the Arlington location of Red Bryan’s Barbecue—opened David’s Barbecue in 1988 in Pantego, after the Red Bryan’s Barbecue chain dissolved. At David’s, you can still find the hand-battered onion rings on the menu. I stopped in for an order of ribs and rings, and shared Sutphen’s story with David’s son, Jimmy Harris, who now owns the place. “It wouldn’t surprise me in the least,” Harris said, adding that Red was known for freely sharing his barbecue knowledge. I did notice that the rings at David’s barbecue had a thinner, less sturdy coating than at Sutphen’s. “Our recipe isn’t the same as Red’s,” Harris said. (The onion rings at Sonny Bryan’s are just as noteworthy, but the floured coating isn’t close to the same texture as Sutphen’s.)

Through recipe sharing and copycats alike, battered onion rings are now one of the signature side items in Panhandle barbecue joints. Harris believed that Red used eggs, or maybe it was egg shade—which is a food coloring that provides a yellow-orange tint, but not any flavor. Sutphen said it was one of his father’s secret ingredients. It was likely part of the recipe that Joe shared with Dyer’s Barbecue when they opened in Pampa in 1967, which still serves an onion ring much like the ones at Sutphen’s. Sutphen’s expanded to Amarillo and Dumas for a while, bringing their onion ring influence along. Dyer’s also expanded to Amarillo, and at least one Amarillo barbecue joint had done what Sutphen assumed was a copy. “He doesn’t cook them hot enough and they’re soggy,” Sutphen said of the unnamed barbecue joint. “You gotta put a little corn meal in there to let them stand up.”

After a recent meal at David’s Barbecue, I posted a photo of the ribs and rings plate on Instagram. A commenter said it looked like a plate from the Panhandle. He’s technically right, but little did he know that, at its root, the region’s most recognizable side dishes have a Dallas barbecue icon’s recipe to thank. 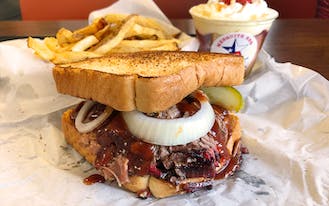 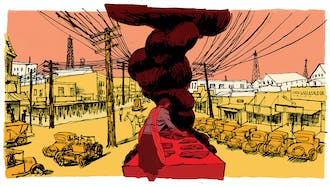 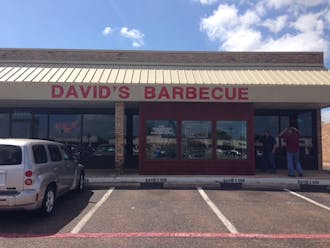