Legends in the barbecue world perpetuate themselves. Keeping your doors open for decades takes hard work, loyal customers, and a little luck, and it doesn’t happen that often. In return, such barbecue joints are worshiped for their longevity, and rightly so. It’s a huge benefit, but it also comes with some disadvantages. Unlike upstarts who can charge more, tailor a menu for today’s tastes, and have no past to answer to, storied barbecue joints carry the baggage of expectations.

Pizzitola’s in Houston is a microcosm of this diminished freedom. They have a basic menu that doesn’t change much, suppliers that count on their continued partnership, and more than fair prices that become points of contention when nudged up a bit. They also have a pair of famous brick pits that have become an albatross.

“It’s the Pits…” was the headline in a Houston Chronicle article about the joint a couple years back. More than even their barbecue, Pizzitola’s is known for those one-of-a-kind (in Houston anyway), grandfathered-in brick pits. It’s one of things that makes the restaurant special, and provides a great deal of notoriety for the eighty-year-old restaurant. Barbecue tourists with cameras search for an angle in the tight kitchen where they can get the whole pit in the shot. “On any given day, fifteen or twenty customers get their photo taken in front of the pit,” managing partner Tim Taylor told me. There isn’t much room to work with, and that won’t change anytime soon.

That’s part of the rub with Taylor who calls the pit “our biggest burden and the thing that sets us apart.” The city won’t allow them to make any other changes to the kitchen without affecting the grandfather clause. That keeps Taylor hamstrung when it comes to solving the restaurant’s biggest challenge – good smoked brisket.

The pits at Pizzitola’s were built for cooking their famous pork ribs, which need plenty of space, but get done quickly. Due to the placement of the fire at the edge of the smoker, rather than in a separate chamber, the heat inside the pit is intense. The zone at the far end is fine for brisket, but that’s a tiny part of the smoker’s real estate. Instead, in order to cook enough food for they day, they’re forced into a method of rotating briskets from the hot to the cool side all day long. The result is a good, smoky brisket, but the rapid cooking also means it can get pretty dry. Even with the extra labor required to rotate the briskets, really great brisket, especially from the lean side, doesn’t happen with regularity. As a tip, Taylor suggested ordering it “top side in and out” to get a slice of moist beef with plenty of bark, but he’d rather serve a brisket that’s smoked low and slow, and is juicy from one end to the other. Specifically, he’d like to install an Oyler rotisserie for briskets, but there’s no guarantee an addition like that wouldn’t affect their grandfather clause. It’s complicated.

The ribs don’t come with the same challenges. They are consistently great, but a thin rack can find its way into the mix and dry out a bit. The flavors are as simple as salt and pepper, but not the popular cracked pepper to Central Texas. This is table salt and simple ground pepper, just like you’d find in a shaker at the dining room table. Pizzitola’s likes to keep it simple.

Smoked chicken is just as simple, and also a great option. Again, some pieces can get a little dry, but it’s smoky, peppery, and the heat of the pit gets rid of any problems with flabby skin. A solid smoked sausage with heavy black pepper seasoning comes from V&V Sausage in Flatonia. Those four meats make up the menu. Not much else can fit on the pit. 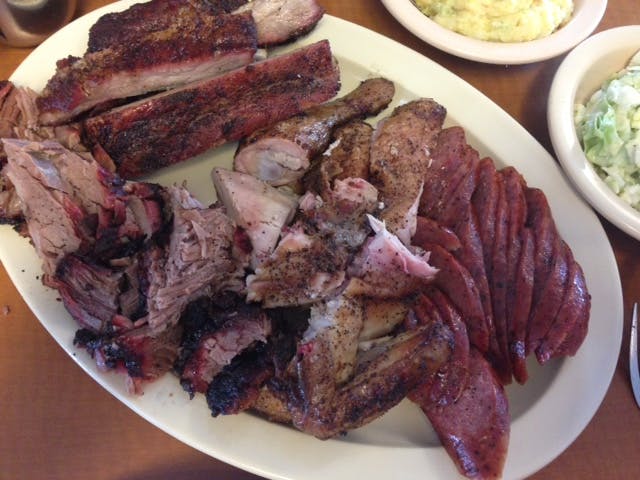 The sides are classic. A heavily dressed slaw, well seasoned pinto beans, and a mostly mashed potato salad. All those are fine, but none compare to the excellent banana pudding. 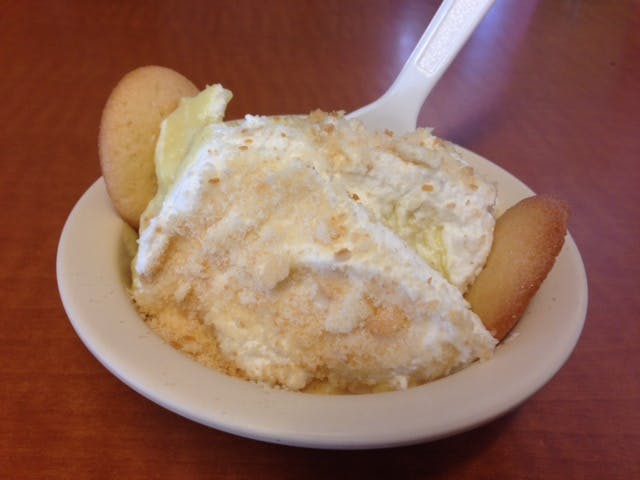 Pizzitola’s is a legend wishing it could play the new game where juicy briskets trump years in service. Maybe they shouldn’t change a thing. Yes, they have some issues with consistency that are inherent in the equipment that helped make them famous, but maybe we should be happy to get a taste of classic Texas barbecue just like it was decades ago. And just like their pits, that’s something you don’t find every day.