The Slow Bone smokes some of the best barbecue in Dallas. Their brisket, pork ribs, and sausage would please any barbecue purist, but they also take unconventional steps for some of their other favorites. The smoked chicken is chilled after smoking and heated for service the next morning with a blast in a hot oven. Smoked water is the base of the brine for their fried chicken, which is the best in town. But it’s their new smoked pork chop special—made using a multi-step process—where their methods get really complicated.

Slow Bone’s chef and owner, Jeffrey Hobbs, began offering the smoked pork chop in December. He starts with a full rack of bone-in pork loin, just like the famed chops you’d find at Kreuz Market, in Lockhart. It’s seasoned with salt, black pepper, sugar, and garlic powder, and then stored in the cooler. It doesn’t just spend the night either—it remains there for two weeks. That’s a lot longer than a dry brine; it’s closer to a curing process. The pork remains uncovered and is placed on rack-lined sheet pans so it can breathe. “We put them right in the line of air circulation in our walk-in,” Hobbs said. The salt penetrates all the way into the meat, and a pellicle forms on the surface of the pork. Baking soda is added to the rub to allow for more complete drying of the surface and to promote browning once the meat goes into the smoker.

The racks of cured pork go into the smoker for two hours, or until the meat temps out at about 125 degrees. Hobbs allows the pork to chill, then vacuum-seals it in plastic for another week of aging in the cooler. “I took that tip from that article you did on those dry-cured ribs,” from the Brewer’s Table in Austin, Hobbs told me. He also insisted that the extra time in the cooler allows the meat to get even juicier.

The chops are only a Monday special for now, so that morning Hobbs cuts open the vacuum-sealed packages and warms the already smoked racks once again on the smoker, just to gradually raise the internal temperature. Then he throws them in a hot oven “to crisp them up a bit.” As if there weren’t already enough steps in this process, when an order is placed, a single chop is cut from the rack and heated on the flat top. It brings some of the juices to the surface and adds some browning. They’re beautiful chops, but I was stunned by the flavor.

The pellicle on the outside edge of the chop gives it an audible crunch. The saltiness of the meat means you won’t get those bland bites usually at the center of a pork chop. The texture was also unique. The curing and aging process had tightened the meat, but it wasn’t tough. It was like the pork flavors had been concentrated. I enjoyed the first chop I tried so much that I had to get back to the Slow Bone the following week to get two more. Hobbs hinted they may also be available on Sundays in the near future, and I can think of worse ways to start your week than with a pork chop that takes three weeks to make. 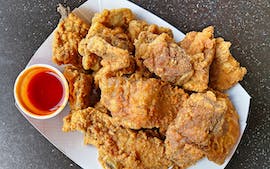 The Fried Rib Tips Are Sacred at Mitch’s Corner Stop 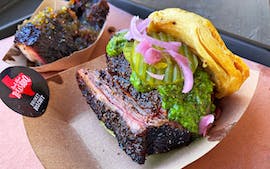 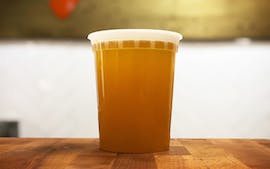 Most Restaurants Trash Their Leftover Fat. This Houston Barbecue Joint Made it a Signature Item 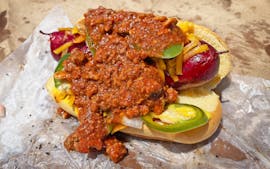 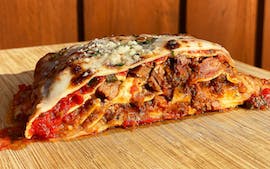