For pitmasters who feel stifled by the salt and pepper tyranny of Texas brisket seasoning, pork ribs can be a creative outlet. I’ve had them sweet, savory, and dusted with fiery habanero powder. They’ve come coated in garlic paste. At Sonny Bryan’s in Dallas, they even grill them individually on all four sides. I’ve eaten many variations on the dish, but the aged pork ribs at The Brewer’s Table in Austin were the first in a long while to surprise me with flavor.

There’s low-and-slow cooking, and then there’s the intricate, multi-part process that executive chef Zach Hunter goes through for these ribs. To begin, the racks are cured overnight in a mix of salt, brown sugar, spices, and hops (it’s a brewery too, after all). The ribs then sit uncovered in a refrigerator for fourteen days. The restaurant’s founder Jake Maddux said they’re the most popular item on the menu, and Hunter reiterated the point. “We wanted to hang them to age, but we go through so many now we lay them on racks in a refrigerator dedicated specifically for ribs,” he said.

Once they’ve aged, it’s time for the smoke. There’s a pair of Aaron Franklin-built smokers out front of The Brewer’s Table that do the job. “By that point they have a really nice pellicle on the outside, so once we smoke them they’ll hold on to that good smoke flavor,” said Hunter. After smoking at 200 degrees for an hour, the ribs are cooled, encased in lard, and vacuum sealed to ready them for sous vide cooking. They further tenderize by lying in a sous vide bath for ten hours. Afterwards, the ribs are chilled and separated so they can be grilled up, three at a time, for each order.

Vegetables get equal status as meat dishes on The Brewer’s Table menu, and one of their shareable feasts includes a whole squash roasted in the coals of their wood-fired grill. For the ribs, the scraps of each squash are collected, doused with beer vinegar, and dumped into a bubbling pot of caramelized palm sugar. The mix creates what Hunter calls a liquid toffee, which is brushed on the ribs as they finish on the grill over the wood fire. “Having the brewery so close to us, and being able to use Drew [Durish, the head brewer’s] beer to make the beer vinegar that goes in the toffee was the missing piece that puts it over the edge,” Hunter said. It’s a unique sweetener that’s somewhere between pancake syrup and molasses in viscosity. In the spring and summer, when squash is out of season, the scraps may come from tomatoes or onions, so the flavor of the ribs will change throughout the year.

The finishing touch on the ribs is a dry seasoning that coats the top after cooking. In practice, it’s like a Memphis dry rub shaken over a rack of baby backs rather than meat seasoned before cooking, although this coating is a fine green powder rather than the red color most associated with barbecue rubs. Hunter creates his “garden dry rub” with dried herbs that hang in the rafters of the restaurant. “I wanted a way to introduce a totally new flavor to ribs,” says Hunter, who also incorporates leftover vegetable trimmings and stems into the rub, dehydrating them before adding them with some salt and sugar. On the rib, it looks like dried sage from a spice jar, but it provides a stunning pop of flavor.

Even with all the steps and ingredients included in these ribs, in the end, pork is the dominant flavor. Hunter starts with ribs from Red Wattle hogs produced by Legend Meats. They get those hogs in whole, and there are only two racks of ribs per animal, so they also supplement with Tender Belly brand ribs and other locally available pork. The finished product has the qualities of smoked ribs, bacon, and ham all at once, with meat that barely clings to the bone. Hunter said the texture and the aesthetic of this dish have been an extended work in progress. “I’ve been thinking about this dish for, I don’t know, the last seven or eight years,” he said. It shows—they’re a masterpiece.

Don’t ignore the colorful mix of seasonal pickles that come alongside the ribs. My plate came with strawberries, carrots, turnips, radishes, and onions pickled cold in beer vinegar, apple cider vinegar, and brewer’s yeast. They’re not really fermented, so they refer to them as yeast pickles.

Hunter suggests pairing the ribs with a housemade brew, The Common Lager. “It’s crisp and clean with just the right amount of malt characteristic to play off the ribs,” he said. I asked Hunter if he was worried that The Brewer’s Table, with a frequently changing menu, would become too strongly identified with this one popular dish. “I don’t ever want to say that they’ll always be [on the menu], but they’ll probably always be there,” he said. 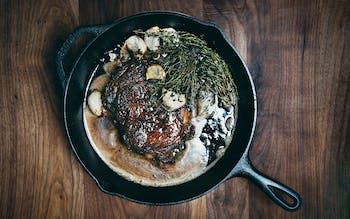 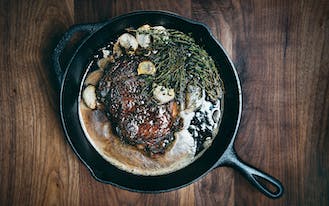