Gregory Johns didn’t learn to cook barbecue from his family, books, videos, or from a mentor. He taught himself through trial-and-error. As he told me, “You burn some meat, you get it right next time.” His journey began in 1998 when he purchased a steel barrel smoker. Eight years later, Johns is still smoking with the same pit and selling the biggest stuffed potatoes in Dallas at Smoke to the Bone BBQ.

When Johns first got his pit, he used it for public service rather than profit. He pulled it around South Dallas and would feed those in need in his neighborhood. First it was at the Bunk House, a Dallas homeless shelter; then he hooked up with the group Mercy Chefs. Until recently, he would feed two to three hundred people every other weekend at the Tent City under I-45 before the city demolished the site a few weeks ago. His disgust regarding that particular decision wasn’t lost over the phone. “The City don’t fund nothing to feed these people,” he said. Now he’s looking for others in need to continue as South Dallas’s volunteer pitmaster.

Johns’s rolling operation remains a big focus for the pitmaster, but he’s also trying to establish a permanent bricks-and-mortar location for his business. He’s scouted a couple of sites in South Dallas, but deals have fallen through, one after he’d been a tenant for four months. He’s now serving out of the back room of Little Egypt Missionary Baptist Church, where he is a member and also where he originally set up shop. I first met him there last year when he had just one menu item—the three-meat potato—and only took cash. I still remember a man in the line in front of me asking for no chives. “I don’t do chives,” Johns responded matter-of-factly. 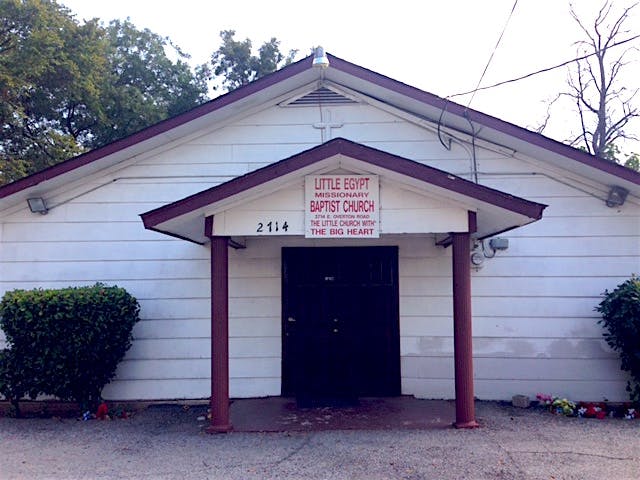 Once the potatoes were halved with a large spoon, the Styrofoam containers could barely contain them the split spud. A generous scoop of butter melted beneath a spoonful of his signature barbecue sauce. “I’ve gotta make it in a room by myself,” he tells me, adding that even his new wife doesn’t know the whole recipe. A mound of chopped beef followed, then two handfuls of glowing orange shredded cheese, chopped bacon, sausage, ribs and a dollop of sour cream. It must have weighed four or five pounds. “Hold it with both hands,” he warned after I handed over a $10 bill. 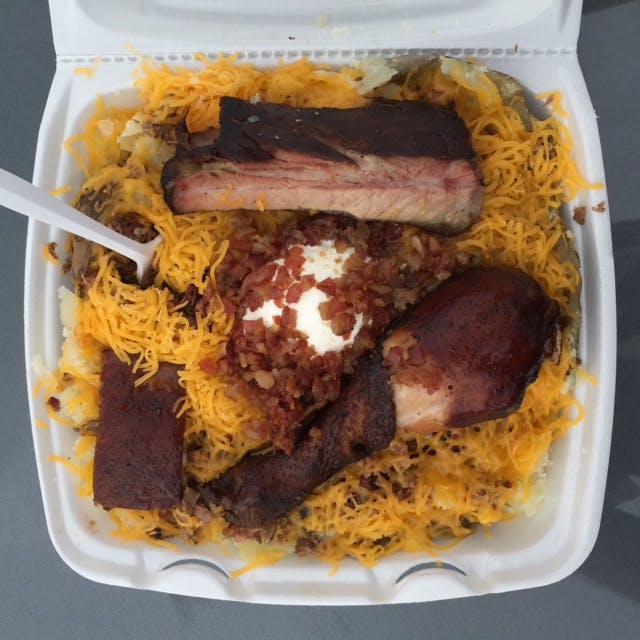 All the meats are smoked in his original smoker, which is fueled only with Oklahoma hickory. “Just a wood pit for me. No charcoal, not lighter fluid. None of that,” Johns promised. His menu now includes ribs, links, and brisket a la carte, but the potato (there’s a four-meat version, which I’ve tried more recently) is by far the most popular item. Johns goes through 120 of them on a busy Saturday. It could easily be a meal for two (or maybe even four), but he charges just $12 for the monster because “I want people to feel like they’re getting good food, a good deal, and good service.”

Johns made a living doing odd jobs before getting into the barbecue business, but he feels like now he’s found his calling. “I love making people feel happy with food,” he told me without a whiff of sappiness. Then he added “When you love what you do, that’s what you do.”