Cherokee sits in between San Saba and Llano in the Texas Hill Country. There aren’t many dining options in this town of a hundred seventy-five. A gas station has ready-made pizzas and there’s Southside BBQ on the weekends.

Alva Zulauf and his wife Chris have operated a barbecue catering company for a long while, but it’s just been in the last three years that they settled into this permanent, year round location along Highway 16. Alva is a product of the Hill Country, and so is his cooking. Meats are cooked directly over coals in a simple steel pit. A towering chimney sits atop a burn barrel out front where the wood is burned down to make coals. I noticed that the wood pile was mainly oak, when most of the joints around this area cook with mesquite. “There are so many dead oak trees from the drought that I’ve got all I need.” A cheap, steady supply of barbecue wood is about the only positive that can come out our lack of precipitation.

Those oak coals are used for a wide variety of meats. There’s the standard brisket, sausage, and pork ribs along with chicken, sirloin, and pork steaks. All these cuts are mopped with a thin concoction being kept warm on the pit. Someone bought every one of his half chickens just before I arrived, so I got a little of everything else. There’s an option to dip your order into a vat of hot barbecue sauce. If you’re expecting an thin, vinegar heavy sauce like Cooper’s in Llano you’ll be in for a bit of a surprise. This thicker sauce clings to the meat much more heavily, and there more sweetness in the sauce. It worked great for the pork, but was not so successful with the beef. 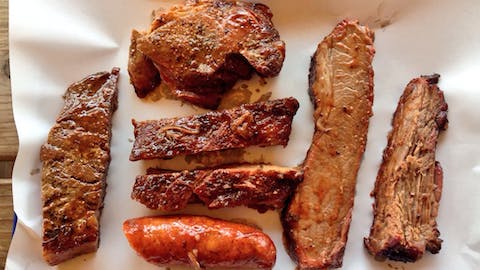 The only thing tougher than the lean brisket was the thoroughly overcooked sirloin. For brisket, you’ve got to go with a few slices of fatty. Mine was cut the wrong direction, but a sharp knife of my own solved that. Each cross-cut bite had a nice bark and good flavor. Alva recommended the sausage which ended up being a basic commercial pork sausage with a little kick from black pepper. There are better options on the menu like the tender pork ribs that taste of the smoke created by fat sizzling on hot coals. It’s the same essence found in the pork steak. It’s cut on the thinnish side, but mine was still juicy right around noon. 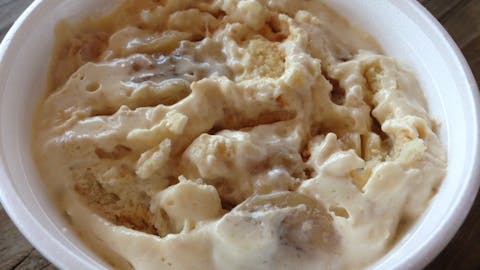 Alva was waiting impatiently for the crowds to arrive as they do every year for deer season, but the banana pudding should be able to pull in a crowd of its own. Rather than whole cookies in the dessert, they are crumbled right into the light and fluffy pudding loaded with bananas. It’s just one of many items, like the potato salad and cole slaw, made by Alva’s wife, Chris. I’ll bet she also deserves the credit for the large communal pot of free pinto beans too.

Southside BBQ knows its place in the barbecue world. It’s menu, cooking style, and setting are emblematic of the small town Hill Country barbecue joint. It’s certainly worth a stop if you’re in the neighborhood. Maybe they’ll even save you some chicken.