Origin stories are often hard to trace. And those of century-old restaurants—especially ones where ownership has changed hands a few times—are particularly difficult to pinpoint. People’s institutional memory literally dies off, and unless someone is fervidly passionate about keeping records (which, when a place is struggling to stay afloat in the notoriously fickle restaurant industry, who is), details from the early days can easily be lost forever. Unfortunately, this confluence of circumstances befell Texas’s oldest barbecue joint, Southside Market in Elgin, which means we may never know the exact story of its origin. But, as with many legends, we do have some background of its history.

The legend goes that in 1882 William J. Moon owned a slaughterhouse in an area known at the time as Hogeye (sometimes spelled Hog Eye), out along current-day FM 1704. (It later became known as Perryville and is now just considered “outside of town.”) He sold meat in town by the wagon load until 1886 when he opened Southside Market in downtown and started selling the famous hot gut sausage they still make today.

Let’s start with some facts. We know the location of this property and the slaughterhouse (maybe more appropriately a slaughtershack) because it’s still there. When the Bracewell family, the current owners of Southside, took over in 1968, the property came with it. Remarkably the foundation of that old slaughterhouse has been preserved. A wooden storage shed was built on the sturdy bed of stone, and a sloped stone trough runs about twenty yards from the foundation. We also know, thanks to historical records, that sometime between 1900 and 1910, Walter “Lee” Wilson become the market’s owner.

The squishier part of the story is what happened in between. Who was William J. Moon? Where did he come from, and what exactly prompted him to open a meat market in Elgin?

This story has been  passed down from longtime employee George “Bud” Frazier (more on him later) to Ernest Bracewell, and now to his grandson, Bryan, who operates the restaurant. It’s not that I don’t believe the story—it’s innocuous and logical enough—but I always prefer proof. The story doesn’t come with the evidence that I usually uncover through historical document research. William J. Moon has long since passed, but he’s also a historical ghost. The census records are normally where I turn for confirmation, but there are only (pardon the expression) dead ends.

Cass County is a few counties away from Elgin’s Bastrop County, but, according to records I found, a twelve-year-old William J. Moon lived there with his father on their farm in 1860. There’s a 25-year-old farmer, Will Moon, in Bastrop County in the 1870 census. He’s gone by 1880 when Wm I (or is it a J? The handwriting in old census records isn’t always clear) Moon, a 21-year-old, shows up in nearby Caldwell County. The 1890 census is no help. Most of it was destroyed by fire in 1921, and there’s nothing in the 1900 census on any name resembling William Moon.

A trip to Elgin was in order. I went to visit Bryan Bracewell, current owner of Southside Market, to see if his family had kept any records about Moon. They hadn’t. Not from neglect, but because there weren’t really records to be had. The entirety of the legend was retold to them by Bud Frazier decades after Moon had passed. Frazier was a well of knowledge because of his nearly unfathomable longevity. In 1902, when he was sixteen, Frazier started working as a butcher at Southside Market. The restaurant would celebrate his retirement 69 years later, in 1971. According to Bracewell, Frazier even owned the place at least once, but it didn’t last. In a 1982 article in the Elgin Courier celebrating Southside’s centennial, Frazier was credited with the sausage recipe, affectionately known as “hot guts.” Frazier was vital to the business, and the key to keeping the legend alive. He was there under Moon’s ownership, and through nearly seven decades of change. What I would give to be able to interview him today.

Obviously, the memories of Frazier are coming to me through Bracewell, and while that’s a good place to start, I still wanted historical evidence. I turned back to the records and found that in 1908, Walter Lee Wilson, who went by Lee, bought the business from Moon. Wilson was 29. He sold Southside in 1942 to a partnership between Jerry Stach, Monroe Stabeno, and the Zimmerhanzel brothers, Charlie and Van. In the intervening years the business didn’t exactly have a stable ownership. Ernest Bracewell, who bought Southside in 1968, told a Bud Frazier story to Foodways Texas when he was interviewed about the business in 2007. According to Ernest, a regular poker game was to blame for much of the back-and-forth ownership:

[Wilson would] come to work on Thursday, and sometime he just lost, you know. It’d be a different [owner]. And next week, it might be a different one. But usually Lee Wilson would win it back, some way or another, I don’t know, but it was lost several times in the poker games. And the poker house that they played in was out there just about three quarters of a mile from where we butcher.

Where they butchered was the same spot where William J. Moon did his butchering. In the forties a new, modern slaughterhouse was constructed. Along with it came a sign that still stands along FM 1704 that reads “Southside Slaughter.” (A single “S” is placed in a way that made Bryan Bracewell’s sister-in-law bristle when she first saw it. She thought the family was a bit sadistic to name such a place “Southside Laughter.”) That slaughterhouse was in operation until 2002 when Bryan Bracewell closed it permanently. Now the focus of the business is fully on hot guts and barbecue. 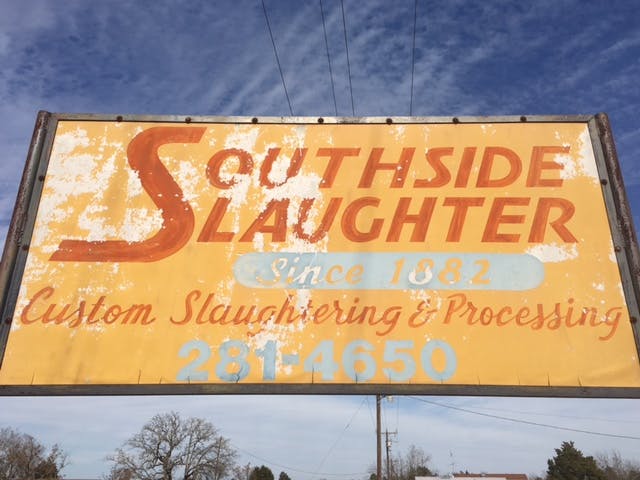 Bryan was as curious as I was to find a solid trace of William J. Moon. We trekked through tall weeds and over a short iron fence into the Old Moon Cemetery to look around. It sits just behind the McShan Cemetery on FM 1704, but is in a far less kempt section. Headstones were overturned, and some were missing entirely. The grave of J. W. Moon caught my eye. He lived from 1845 to 1887. It was long enough to establish the market and move it into town in 1886, but his family would have had to take over between his death and 1908 when Lee Wilson bought it. From his daughter’s death certificate, I saw that he went by William, and the name also led me to his will. He left land to his children, but there was no mention of a market or slaughterhouse. Maybe William J. Moon was buried up the road in old Hog Eye Cemetery instead? We’ll never know because it was long ago plowed over. All we have left is the sausage. 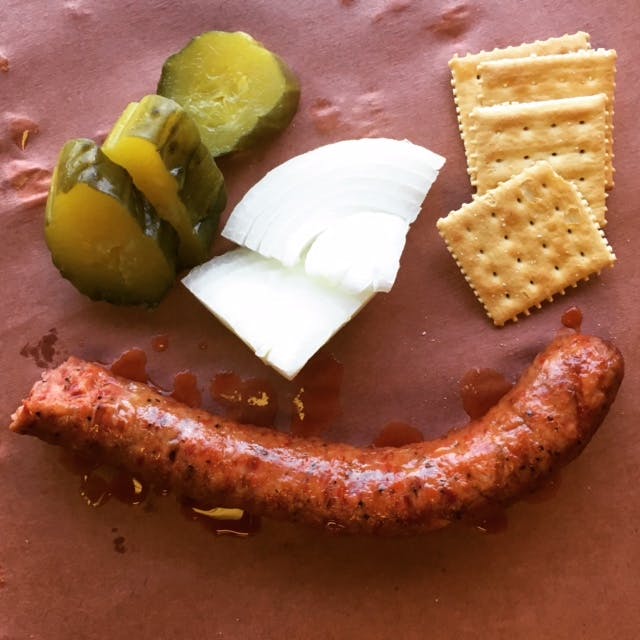 The best we can do now is trust Bud Frazier’s story. As for the rest of the history, the record keeping has been impressive since the Bracewells have owned it. Thanks to those details about their milestones and menu changes, next week we’ll look at how Southside Market transformed from a meat market selling sausage to a modern Texas barbecue joint.