Smoking brisket takes time—sixteen, eighteen, even twenty hours. These cooking times get thrown around with a little pride, but none of the braggarts can top the hours a brisket spends in the smoker at Clark’s Outpost in Tioga. I’m talking more time in the smoker than Jesus spent in the tomb. It takes 78 hours basking in hickory smoke before the briskets are ready to serve.

It should be noted that this prolonged smoking time isn’t the only thing that put Clark’s Outpost on the map. For a time, this was once one of the most popular barbecue destinations in the state. Clark’s Outpost certainly hasn’t been around as long as some of the big names in barbecue—Kreuz Market in Lockhart opened in 1900 and Southside Market in Elgin dates back to 1886—but when Warren Clark, a former disc-jockey and clothing salesman from Dallas, opened the joint in 1974, the brisket, ribs, fried corn, and black-eyed peas they churned out of the tiny barbecue shack they leased in Tioga quickly became a local favorite.

Roughly a decade in, Clark’s found its real champion: Chef Dean Fearing. In 1982, after his first stint at Dallas’s Mansion on Turtle Creek, Fearing opened Agnew’s, one of the founding establishments of the Southwestern Cuisine movement. At the opening party for Agnew’s he remembers seeing a couple in western clothing. It was Warren and his wife, Nancy. Fearing had developed a taste for barbecue, so the couple told him about their restaurant in Tioga. He asked “where in the hell is Tioga?” In those days the Tollway stopped at 635, but Fearing took a girl and his new Z up the backroads for a bite of brisket. “It was a classic barbecue place in a ghost town,” he told me. “It was good.” 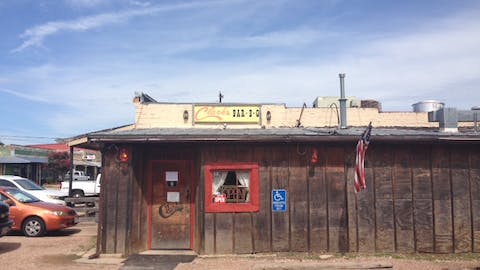 Then in 1984, Fearing told the Dallas Morning News that Clark’s was one of this favorite restaurants. “It has the most perfectly smoked ribs I’ve ever eaten in my life,” he gushed. A legend was in the making.

Almost single-handedly Dean Fearing made this joint famous. When I posed the possibility to him recently, his response was simply “You could say that.” After that first trip, Fearing went back. A lot. He brought Julia Child, Stephan Pyles, Robert Del Grande, Jacques Pépin, and Wolfgang Puck. “Wolfgang was truly head over heels for it.” Everyone from Alice Waters to Alice Cooper made their way to Clark’s while visiting Dallas, and they were all escorted by Fearing. He and Alice Cooper rode in Cooper’s limo from Dallas. Cooper just kept saying, “Where in the hell are we going?”

By the late eighties, Clark’s Outpost was also a darling of the critics. The quintessential, rural barbecue shack run by a gregarious pitmaster made for good copy. Kim Pierce of the Dallas Morning News gave it three stars in 1988, then a year later People magazine claimed “Clark produces the best barbecue in Texas.” Executives in downtown Dallas began flying their helicopters up to Tioga for lunch. Another good review from the Dallas Times Herald is still hanging in the foyer at Clark’s,  mounted with a handwritten note from none other than Sonny Bryan. “Congratulations! My advice ‘Never go in business in a small town.’ – you made it work!!!” 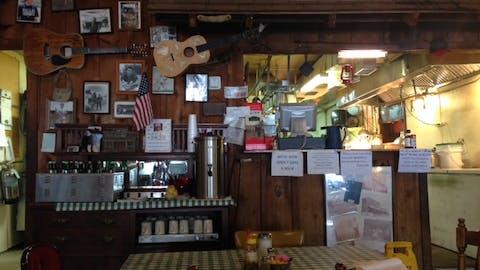 The wave of popularity continued for another decade. Features followed in Gourmet, Bon Appétit, and Texas Highways. It got a few mentions in Texas Monthly, but in the issue that counted, the 1997 Top 50, it only received an honorable mention in the atmosphere category “for its rustic, nostalgia-inducing setting.” Texas Monthly’s food editor, Patricia Sharpe, remembers the visit well. She asked Fearing and Pyles for Dallas-area barbecue recommendations. “They mentioned Clark’s Outpost, so I drove all the way up there from Austin. It was just absolutely average to not good.” She hoped it was just an off day.

Warren Clark succumbed to cancer in 1997. Even with Nancy taking the reins, a bit of the magic that was Clark’s went with him. Fearing attended the funeral in Tioga with his then-wife Lynae, who was pregnant. They announced that their son would be named Jaxson Clark Fearing. “There wasn’t a dry eye,” recalled Fearing.

Without his buddy Warren, Fearing’s draw to Tioga faded. After the funeral, Fearing visited “a couple of times, but it was one of those that you needed to just leave it…I can’t tell you the last time I was there.” Those sentiments were echoed by Dallas chef Stephan Pyles, who also became a Clark’s regular after visiting with Fearing. “It just wasn’t the same.”

When I mention Clark’s to casual barbecue fans, I either get a puzzled look or something like, “That place is still open?” It is, and they’re still cooking the briskets and ribs just like Warren Clark did (see this recent TMBBQ review).

James Hilliard starting working for Warren Clark on the third day Clark’s Outpost was open, and then he bought the joint in 2000 along with a couple partners. He tends to the smokers these days, and described the cooking process to me. They start the fire at 173 degrees with hickory wood in a Southern Pride rotisserie. The unseasoned and untrimmed briskets go on once it’s heated up, and the temperature is dropped down to 160 degrees. For the next three days, hickory wood will be fed into the firebox, and the temperature will hover between 150-160 degrees the entire time. 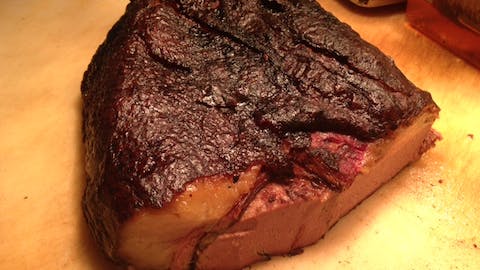 The result is some intensely smoky beef. In fact, it’s more like a cured meat product (minus the salt), than simply smoked meat. Atop the beef sits a layer of fat so supple it could be spread on toast with a butter knife. Sadly, most of that fat is discarded. A large, and still untrimmed brisket sat on the cutting board while I spoke to Hilliard. I asked for a couple untrimmed slices. I wanted all the fat, but most customers don’t. As the slices fell onto the board, he instinctually brought the edge of his knife down toward the fat cap, and I stopped him. Almost annoyed, he placed the meat and fat on a plate, and I enjoyed every bite in the dining room.

I asked Hilliard where the three-day cooking time came from, and he told me a story. “When we first opened up, we were smoking for five days. Warren was trying to capture the flavors that this Uncle Raymond got out of the old smokehouses when he was a boy in Arkansas.” After customers complained that the barbecue was so smoky they were getting heartburn, he acquiesced and cut back the smoke. “He realized those smokehouses leaked like a sieve,” while the modern cabinet smokers were nearly air-tight. The resulting three day cooking time was the compromise.

When I recently visited, the day was just getting started and Hilliard was busy getting the kitchen in order for the coming lunch rush. He didn’t have much time to reminisce, but he did admit that when Alice Cooper visited, Warren Clark thought he was a woman.

On the long wall of the dining room at Clark’s there’s a mural painted directly onto the wall. It’s an old western scene with conestogas and chuck wagon cooks. Warren and Nancy Clark ride horseback. Dean Fearing strums a banjo while cross-legged in the grass. He is joined by a lounging Stephan Pyles and a towering Robert Del Grande. None of these titans of Southwestern cuisine posed for the painting. It was an unexpected homage, which is now peeling from the wall and is beyond repair.

Next week brings Part II of the Lowest and Slowest with a look at Stephan Pyles’s five day smoked brisket.