You’ve probably didn’t know there is an Oklahoma, Texas, but that’s where you’ll find The Wooden Spoke on a corner gravel lot along FM Road 2978. It’s officially in Magnolia, but the Oklahoma Cemetery and the Oklahoma Community Center are just a block away. Despite that, owner and pitmaster Mike Gray confirms that his barbecue is thoroughly Texas style.

In the early nineties Gray competed against twenty or so other teams in a Texas cook-off and took third place. He’s been hooked on barbecue ever since, and a couple years ago he figured it was time for a move into the commercial barbecue arena. “I’ve had enough practice, so I want to get paid now when I cook,” is how his decision to make the competition circuit a lesser priority. 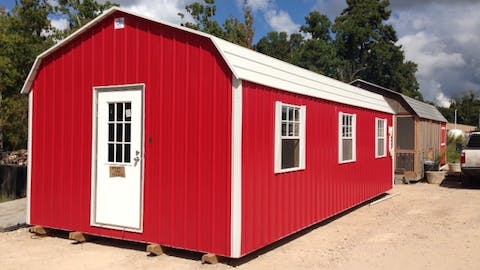 This isn’t Gray’s first foray into the restaurant business. In Carlos, Texas, twenty miles east of College Station on Highway 30, he ran a full service restaurant where barbecue was just one section of the menu. “Pretty soon you’ve got $4000 or $5000 wrapped up in inventory waiting for someone to order something from a four page menu,” he lamented. A large menu isn’t his style. Here in Magnolia he started small with just two unenclosed structures and a trailer. One was just replaced with an enclosed metal building that connects to the trailer/kitchen, while the other building is essentially a screened in porch without the house. 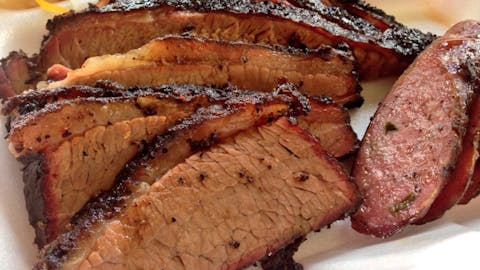 A Southern Pride rotisserie smoker is the only cooker currently on site, but Gray will be adding another pit to his arsenal soon. He purchased a Cadillac rotisserie smoker from Corkscrew BBQ in nearby Spring. He plans to smoke his brisket on it once he brings in on line, but that’s the meat that needs the least amount of work. It was smoky with a nice layer of tender fat along the top of each slice. It was seasoned well with just salt and pepper and even the lean slices were moist. Given his use of mild pecan and a gas-fired smoker, I told Gray I was surprised by the deep smokiness. “Unlike some people, I really load it up with wood,” he assured me.

The rest of the meats need some work to get to the same level as the brisket. A link of jalapeño sausage was smoky and flavorful, but dry. These links will be familiar to anyone who enjoyed them at Snow’s BBQ in Lexington. They share a supplier in Hildebrandt Meat Market in Lexington, and both smoke the raw links. A quarter chicken had great smoke and was plenty juicy, but the skin was flabby and the leg couldn’t be separated from the thigh without considerable effort. 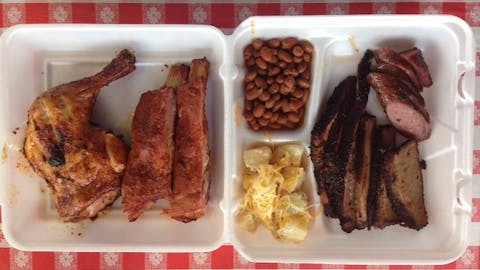 I was dining with the Houston Chronicle’s barbecue columnist J.C. Reid who has been here a number of times. As we bit into the huge spare ribs he looked disappointed. The ribs are wrapped for a good portion of the cook, so they didn’t have any bark and very little smoke. They were tough to boot. J.C. was frustrated to see the inconsistency in the ribs that are usually better. The same can be said for the pulled pork sandwich. When I tried Gray’s version at the Houston BBQ Festival it was one of my favorite items. Back at the restaurant there was too much sweet sauce in the mix, and not enough of any other flavor. 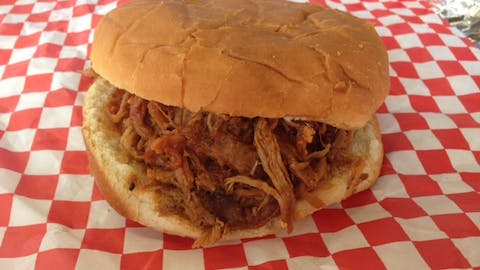 Although it’s about forty miles from the center of Houston, Magnolia is quickly getting swallowed into the Greater Houston area that includes the nearby Woodlands. Gray is thinking that now might be the time to buy this plot of land as the developments sprout up around him. Maybe a building with an actual foundation will find its way onto the site, but in the meantime those newcomers to the area will have a solid spot to get their smoked brisket fix.