When Vaqueros Texas Bar-B-Q sets up on Saturdays at Hop & Sting Brewing in Grapevine, it’s like a barbecue reunion. Trey Sanchez runs the operation now, drawing on experience he gained twenty years ago at Arnold’s Texas Bar-B-Q, his father’s place in East Dallas. Family friend Don Glasco joined the father-and-son team to run Arnold’s for ten years until it closed in 1999. Now the trio are back together, serving up an inventive new version of Mexican-influenced Texas barbecue.

For a long time, Sanchez thought he was done with the barbecue business. He started his teaching career in 1999 and eventually became a stay-at-home dad. Then he began managing the books for his wife’s dental practice—work he continues today. But he doesn’t exactly love working in an office, so in 2014, when his father-in-law offered to build him a barbecue pit to feed his weekend hobby, Sanchez jumped at the chance. He gradually built a loyal following by cooking for friends and at a few catered events, starting an Instagram page for Vaqueros Texas Bar-B-Q in 2018. That August, he hosted his first pop-up in a gas station parking lot. Now Hop & Sting is his permanent home. Vaqueros is currently open on Saturdays only, though Sanchez says he plans to change that as soon as next month.

When I visited recently, Sanchez pulled up just five minutes before his scheduled noon service. His massive Dodge Ram pickup, license plate “TX BBQ,” was hauling a brand-new smoker. It was larger and more unwieldy than his previous one, which is why it took him 45 minutes to maneuver out of his driveway, hence the late arrival. A catering van pulled up with a “BBQ VAN” license plate; then Sanchez and his team scrambled to arrange the tables and cutting blocks, as well as set up wooden fencing that marked the serving line. A staffer heated up a plancha behind the barbecue pit for what has quickly become one of the signature items at Vaqueros: the smoked brisket birria tacos. Nearly everyone in the rapidly formed line of roughly 25 people ordered one as soon as the team was ready for customers at 12:30.

Sanchez has been serving brisket and beef cheek tacos from the start at Vaqueros. He and his dad even offered them at Arnold’s Texas Bar-B-Q back in the nineties, they weren’t popular with customers at the time, Sanchez says—the staff ended up eating most of them. The idea for the birria tacos came more recently, after Sanchez and his wife traveled to Guadalajara, Mexico, for a dental conference last July. He ate his way across the city, reveling in its flavorful birria de res. Now trending in Texas, birria is typically made from goat or lamb, served in or alongside a consommé created from its own drippings. After his trip, Sanchez perfected a consommé made with smoked brisket, and added the brisket birria to the menu in January.

For the taco, chili oil is squirted on the hot plancha to warm a corn tortilla. The tortilla is flipped, then topped with freshly chopped smoked brisket, onions, cilantro, shredded jack cheese, and a splash of consommé. The tortilla is folded over to form the taco, then it’s flipped to crisp both sides. A container of the consommé—seasoned with chiles, onions, oregano, marjoram, cinnamon, and cloves—is served alongside for dipping. A slick of brisket fat floats on top of the warm liquid, which has a moderate amount of spice. You can add a little more heat with a homemade green salsa, or opt to keep things tame with the red salsa. The brisket birria taco is like a better version of every cheese sandwich dipped in soup you’ve ever eaten.

Don’t forget to save the consommé so you can dip slices of smoked brisket into it, too. Sanchez loves black pepper, and you’ll have to as well to enjoy the brisket. The meat is seasoned with a blend of kosher salt and black pepper, then coated generously with a heavier gauge butcher-grind pepper before smoking. The long cook time does little to temper the pepper’s heat—an end cut of brisket might be the spiciest thing they serve at Vaqueros. Thankfully, the brisket is also expertly smoked, and the slices are juicy and tender, as are the pork spare ribs. They’re more subtly spiced, and have a thin coat of sweet glaze made with Vaqueros barbecue sauce.

For a refreshing counterpoint to the peppery brisket, try the cucumber salad (which still has a bit of spice). The homemade potato salad is light on the dressing, and too heavy on the bell peppers for me. Vaqueros also makes one of the heartiest slaws I’ve eaten in Texas. Essentially a Waldorf salad with cabbage, it comes with walnuts, apples, blue cheese, and dressing served on the side to preserve the crunch. As for dessert, you’ll have to be patient. Sanchez is working on his recipes for peach cobbler and a banana pudding that uses a Hop & Sting stout, but he’s not ready to serve them just yet.

Sanchez learned plenty about barbecue from his father, including his preference for hickory wood smoke. For years the duo served the Elgin hot guts from Southside Market, but Sanchez has now learned to make his own. He credits Dayne Weaver of Dayne’s Craft Barbecue in Fort Worth for getting him started, and Ted Prater of Banger’s in Austin for talking him through the finer points of sausage-making. “One of the big differences that I’ve noticed in barbecue today than the old school,” Sanchez says, is “all the pitmasters are just like a brotherhood.” There wasn’t much of an opportunity to interact with other pitmasters in the nineties, he explains, and knowledge wasn’t shared as easily or readily as it is today. Though he assures me that he still has plenty of the old-school left in him.

“It doesn’t seem right to eat a hot link that’s not red,” Sanchez says, when I note the bright red casings on his homemade hot link. That red color is a signature of East Texas hot links, but the hue is usually achieved with dyed synthetic casings. Sanchez has a different method. “I’m gonna go ahead and spill the beans on the red color,” he says, explaining that he adds red food coloring to the water the casings are soaked in. It’s still plenty visible after smoking. They’re as hot as advertised, and well made, too. Sanchez mixes pork and beef with some cheese. A second all-beef sausage option is spiced with chipotle and also has some cheese in it. It tastes like a cheesy version of chorizo, and it was hard to pick a favorite.

In addition to the weekly Saturday service, Sanchez is running a barbecue-and-beer takeout special on Wednesday evenings. It’ll feature a limited, rotating menu that won’t include tacos, plus a six-pack of Hop & Sting beer. As the name suggests, the brewery offers several hoppy IPAs, but it has also resurrected an old DFW-area favorite: an English brown ale that D Magazine named the best beer in Dallas in 2014. It was originally brewed by Grapevine Craft Brewery, the predecessor of Hop & Sting.

Sanchez is hoping to set up a permanent trailer at the brewery, with plans to serve barbecue during the day and burgers at night. For now, those brisket birria tacos are well worth the wait for Saturday. 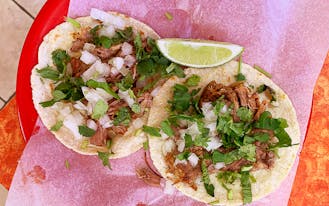