Q: I come from a long line of Texans, and my grandfather’s side of the family has a family cemetery outside of Fort Worth. It’s small, not crowded, and sits on the old family homestead, which was sold off a couple of decades ago. My grandfather has, unexpectedly, been making noises that he wants to be buried beside his mother in the old cemetery, and we have no idea how to go about that. As far as we can tell, while the property owner keeps the cemetery mowed, no one is actively managing it. Who gives permission to lay a body in the ground of a private family cemetery that’s no longer in your family’s possession?

A: For as long as humans have roamed Texas, dedicated portions of the state have been reserved for funerary purposes. It is estimated that more than 50,000 such boneyards are scattered across the landscape of Texas today. The oldest recognized of these is known as the Ernest Witte Site, a place located on a bluff along the Brazos River, in Austin County, west of Houston, where prehistoric Texans were placed to enjoy their eternal rest beginning some four thousand years ago. The last of the 238 or so folks who were interred at the Witte burial grounds passed on some five hundred years ago, before modern customs, standards, and regulations with regard to the final disposition of dead Texans came into being.

The first modern(ish) cemeteries really began to spring up in the early to mid part of the eighteenth century, during and just after the Republic of Texas days, when the population (and number of deceased Texans) was booming. And among the tens of thousands of graveyards spread across the state today, a good number of them are small family affairs that were established by clans just like your grandad’s. Such depositories can be found in the centers of big cities and out in the hinterlands alike. There’s one such grown-over plot, Tucker Cemetery, hidden in the woods behind a Rudy’s Country Store Bar-B-Q in Austin that the Texanist occasionally hits in desperate pinches, and any country drive will be sprinkled with numerous similar spots.

The cemetery founded by your family generations ago, modest, uncrowded, and sitting on ancestral land as it is, sounds like a fine place to spend an eternity. Is it situated on a hilltop, with ample shade from a stand of old live oak trees? And is it enclosed with ornate fencing and does it feature a sign with your granddad’s family name on it at the front gate? Whether it does or doesn’t, the Texanist is moved by your grandfather’s wish to lie there next to his mama in perpetuity.

But unfortunately, as a nice fellow with the Texas Cemeteries Association informed the Texanist, when the property changed hands all those years ago, your family cemetery most likely became the family cemetery of the buyer. Unless the terms of the sale featured some sort of a carve-out, your granddad no longer has a right, explicit or implicit, to be buried there.

Interestingly, as the Texanist was further told, pertinent statutes, in this case Section 711.041 of the Texas Health and Safety Code, do allow for visits by family and the general public no matter where on the private property the burial ground is situated. “Any person who wishes to visit a cemetery or private burial grounds for which no public ingress or egress is available shall have the right to reasonable ingress and egress for the purpose of visiting the cemetery or private burial grounds,” it states.

The Texanist realizes that as accommodating as this legislative gesture may be, it’s likely cold comfort to your grandad, as well as a pretty sorry consolation prize. Alas, all hope is not lost. To answer your question, it is the cemetery’s current owner who is the ultimate decider when it comes to who does or doesn’t get buried on his or her property. If your family’s former cemetery hasn’t been peopled to capacity with the current owner’s dead relations, and that person is feeling accommodating, and there are no issues with regard to flood plains, deed restrictions, or underground pipes and cables (matters about which the cemetery’s owner will need to check with the local county authorities), the Texanist sees no reason that your granddad’s final wish, to spend the hereafter pushing up daisies alongside his mama, could not be granted.

And if it is, here’s hoping that it’s not fulfilled for a good long time.

A version of this is published in the December 2018 issue.

Trending in Being Texan 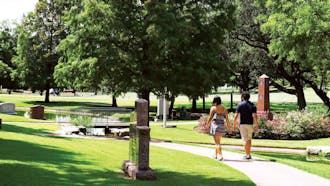 Remains to Be Seen