Q: While sitting in a meeting at work the other day, my mind really started to wander and before I knew it I found myself overcome with a strange curiosity about Texas toast. I’ve lived in New York my whole life, but I’ve loved this glutenous delicacy since childhood. Up until that boring meeting I had just taken Texas toast for granted, but where did it come from and when? Why is it called Texas toast? Generally, what can you tell me about Texas toast?

A: The wandering mind can be a funny thing. One time the Texanist was sitting in a meeting when he suddenly lost focus and drifted away from the subject at hand—magazine cover paper stock—and found himself thinking about miniature donkeys. Before he knew it, he’d toggled over to miniature horses and the question of whether or not there is such thing as miniature mules. Mules, as you know, are the result of mating a male donkey, also known as a jack, and a female horse, AKA a mare—or, in the case of miniature mules, a miniature jack and a miniature mare. Mules are sterile, of course, and cannot reproduce more mules and one would have to assume that this is also the case with miniature mules (unless, of course, they got ahold of miniature mule cloning technology, in which case all bets are off). So the Texanist decided that the whole thing was fairly improbable and turned his attention back to the absolutely fascinating conversation then in progress concerning the relative advantages of 80# Coated Cover Gloss and 80# Coated Cover Dull/Matte. And anyway, what the heck a person would do with such a tiny beast of burden the Texanist cannot really say. But you, a disquisitive man with a short attention span yourself, can see why he was curious.

Turning his attention to the fascinating question at hand, the Texanist feels obliged to note that Texas toast, in its simplest form, is bread that has been sliced at twice the thickness of regular sliced bread, about three-quarters of an inch, and then liberally buttered (or margarined) before being griddled to a golden-brown. The bulkiness of the bread allows for a deliciously toasty exterior and a soft and somewhat spongy white-bread center. In addition to being delectable in and of itself, Texas toast is the perfect implement for sopping. As such, you will see it served at finer greasy spoons alongside such dishes as gravy-smothered chicken-fried steak, gravy-smothered pepper steak, saucy barbecue, fried chicken (sided with gravy-smothered mashed potatoes), runny eggs, and the like. Texas toast also makes for a sturdy sandwich as well as sublime French toast.

Some Texas toast recipes include such ingredients as garlic, pepper, and even grated cheese, but the Texanist finds such concoctions to be a bit ostentatious. The finest Texas toasts are the simple toasty and buttery ones.

As for this crusty delicacy’s origins, the name suggests that Texas toast is a Texas thing, and while the definitive history of Texas toast has yet to be written, it is said to have been the 1941 invention of Royce Hailey at Beaumont’s Pig Stand drive-in restaurant. The story goes that Hailey, in an effort to wow his customers, placed an order for sandwich bread sliced at double the normal thickness, but then, upon learning that this Texas-sized bread would not fit into the restaurant’s toaster, buttered the big slices and toasted them on the griddle. Voilà!: Texas toast. Another version of the story has all of this occurring at a Pig Stand in Denton, with cook W.W.W. Cross standing in for Hailey, but as the Texanist said, the complete history of Texas toast has not yet been written. (The Dallas-based Pig Stand chain, which once counted dozens of outlets in Texas and beyond but has now dwindled to a lonely single stand in San Antonio, is also, by the way, credited with the invention of the drive-in restaurant concept, carhops, onion rings, and the chicken-fried steak sandwich.)

Nowadays, Texas toast can be found pretty much everywhere. Bakeries across the country produce their own versions, including packaged frozen versions, with nary a tip of the hat or an oink of tribute to the Pig Stand. Interestingly, most sliced bread in Japan is as thick as Texas toast, though no one there calls it that, whether or not it is buttered and grilled.

In summary, it’s safe to say that while Texas toast may not be the greatest thing since sliced bread—which, somewhat surprisingly, didn’t hit the market until 1928—it is most certainly the greatest thing that ever happened to thick-sliced bread. As even a life-long New Yorker such as yourself has managed to figure out.

P.S. Miniature mules, by the way, do exist, although the Texanist still has no idea what a person would do with such an animal or whether or not their level of stubbornness is proportional to their size. If he had to guess, though, the Texanist would venture that they are probably at least a little stubborn. 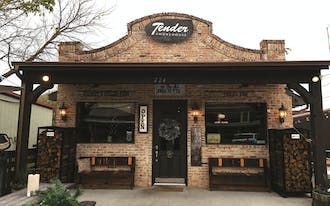 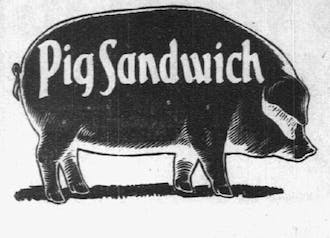 The History of the Pig Stands