Jorge Rojo, chef-owner of Ro-Ho Pork & Bread in San Antonio, left the practice of law behind for the crusty exterior and cushion-soft interior of the birote sourdough bread typical of his hometown, Guadalajara in the Mexican state of Jalisco. The 46-year-old’s early study in baking was of the practical, on-the-job variety, and he opened his first bakery, Faro de León in León, Mexico, in 2001. It’s still open.

In March 2011, he moved to San Antonio to attend culinary school, partly to escape the escalating violence, but more importantly to gain a formal education in baking. Rojo loves baking for the same reason he went into law. It’s concise and methodical, but requires a touch of creativity. “Baking involves chemistry, biology, physics, and even art,” he says.

His somewhat eponymous business, Ro-Ho Pork & Bread, opened inside the historic Sanitary Tortilla Factory in 2015. Four years later, Rojo moved the business into a larger space just southeast of the airport. His signature torta ahogada, which translates to “drowned sandwich,” has been on the menu since day one. Served on a traditional sourdough birote roll in a plastic-lined basket, the torta comes crammed with silky, unevenly pulled carnitas finished with a bath of salsa roja. The pork bits tumble into a pool of the salsa when the sandwich is lifted. It’s not very spicy. (I’ve ordered a couple of tortas in Mexico that were bathed in sauce so fiery that the sandwiches came with a plastic glove. I recently had another in Guadalajara at Tortas Marios in the Mercado San Juan de Dios that I wish had come with one. It singed the skin beneath my fingernails and made my eyelashes sweat.) Rojo explains why his torta isn’t an endurance test: “Everyone thinks that it’s really spicy because some places in Guadalajara submerge in the hot sauce and then just add some tomato sauce. I consider that to be really aggressive for people who are not familiar with the sandwich.” Need to crank up the capsaicin in Ro-Ho’s torta ahogada? Just liberally apply the optional hot sauce.

Everything is handmade on-site daily, beginning with the birote. The bread’s history dates to the French invasion of Mexico in the nineteenth century and the Gallic bakers who emigrated to Guadalajara, where they created what resembles a dwarf baguette. It’s crusty on the outside and doughy on the inside. “The bread is named after what is supposed to have been the baker’s name,” Rojo says. The originator’s name allegedly was Birot or Birrot. Whether that’s true or not, the bread’s qualities make it perfect for a cascade of salsa.

“It’s the moisture combined with the crustiness of the bread, that’s what makes the sandwich really unique. It’s crunchy, but it’s moist at the same time. You have all the elements of other high-end cuisine that round out the dish—salt, texture, sweetness, and all that—but at the same time, it’s spicy too,” he says. It’s also a point of pride for the people of Guadalajara. “When somebody from another part of Mexico visits Guadalajara, locals are really proud to take them to try one.” Although Rojo views baking as science, there is also an element of art. Too much spice kills the subtle flavor of the pork, leaving only the puckering taste of the bread to enjoy. Too little salsa and the bread flakes into a mess.

Papel picado hangs from the ceiling of the covered patio. Inside there are cartoonish pigs painted on the walls, a hobby horse hung on the wall, and piece of art using luchador figurines. “I made that piece to recall the Mexican students who disappeared five years ago. It’s kind of a protest so that we don’t forget,” Rojo says, referring to 43 students from Ayotzinapa Rural Teachers’ College in Iguala, Mexico, who were abducted and subsequently vanished in September 2014. The event is a chilling chapter in contemporary Mexican history and spurred protests across the country.

“I’m really happy that I have the opportunity to bring this kind of food to San Antonio, which is a city welcoming to the Hispanic heritage of Texas,” he says. “Día de los Muertos, for example, is becoming more popular here, and I’m just really happy to bring something representative of the culture—specifically, the culinary culture of Mexico.”

What Do Trail Racing and Tacos Have in Common? 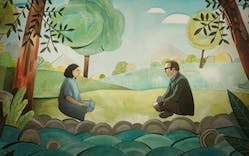