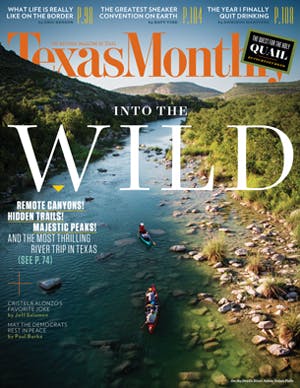 The Sabbath is coming to a close in Bowie County, and in the glow of a lavender late-summer Sunday evening, Pastor Dave Seifert, of Wake Village’s Twin Cities’ Baptist Temple, is watching his flock depart. Almost twenty years ago, Seifert came to this county in the northeast corner of the state to get away from the rest of the world. But the world’s evils have followed him here, and now they’re nipping at the heels of the faithful. “There’s too many people that aren’t standing for what’s right,” Seifert says. Bowie County, one of Texas’s most steadfast redoubts of prohibition, is prepping for a showdown this November. Booze is coming.

Bowie County, best known as home to the Texas half of the city of Texarkana, is saturated with churches—not the megachurches of Houston or Dallas, but the little brick churches of the old-time religion, like Seifert’s. Bowie County is a very good place to find the Lord but, until recently, a pretty bad place to find a drink. Ten years ago, there was no way to legally purchase alcohol in the county—despite (or perhaps because of) the fact that spirits could be easily purchased just across the state line, in Arkansas. Lately, though, cracks have begun to form in the regime.

Next month’s elections will see three more referenda go up for a vote in Bowie County. In both Texarkana and Wake Village, voters will decide whether they want to follow Nash’s example and allow beer and wine in stores. In Nash, by contrast, churches desperate to stem the tide of alcohol have helped place on the ballot a rare prohibition referendum to make the city dry again. Seifert, who has been sober since he was saved, in 1986, says the arrival of alcohol in the county is part of a broader social deterioration. “I hate to see it coming in to Bowie County,” he says. “It breaks my heart. Because I know the destruction it can do to families and futures. Nothing good comes out of alcohol. Nothing.” The stakes are high: If the wets win in all three towns, the rest of the county may well follow. If the drys win, it could be a long time before alcohol returns to the ballot.

Prohibition may have drawn its last breath nationally in 1933, but in Texas it has staggered on. The right of Texans to restrict or ban alcohol sales in their communities was enshrined in the constitution of 1876, and the process for changing those laws was fairly restrictive. When national prohibition ended, many counties—predominantly rural ones in the state’s north and central regions—kept their pre–Eighteenth Amendment ban on the sale of alcohol. As recently as 1995, more than a fifth of the state’s counties were completely dry. Today, just 11 out of 254 are.

But most places in the state are neither fully dry nor fully wet. Towns can go wet—or damp—by holding what’s known as a local-option election. There are ten kinds of local alcohol restrictions outlined in the 1876 constitution. A local jurisdiction can, for instance, authorize the sale of beer and wine, but not liquor, for off-premise consumption. Or it can authorize liquor for sale in stores but not in restaurants. Or it can authorize the sale of alcohol in restaurants but not in bars. In many of the fifty or so localities where alcohol laws are on the ballot this November, there’s already someone in town, or nearby, supplying the goods.

“People think that the way these laws get passed is that it’s a battle between those who are for alcohol sales versus the people who are against,” says John Hatch, of Texas Petition Strategies, a political consulting firm that specializes in making dry communities wet. In fact, explains Hatch, it’s usually the liquor salesmen in the next city over—or, in the case of Bowie County, the next state—who are looking to keep a town dry in order to protect their business. “It’s alcohol versus alcohol,” he says.

If you’ve recently acquired the right to tipple in your town, you have Hatch to thank. A veteran of Texas Democratic politics who worked for Governor Ann Richards, Hatch found himself adrift when the party entered its long decline. One day in 1998, he was approached by a city council member in Buda, just south of Austin. The city wanted to lure H-E-B to town, but the store would need to sell beer and wine to make the numbers work. At the time, Buda was dry.

Hatch agreed to organize a local-option election and quickly realized that it was unlike any kind of politics he’d practiced; Texas law placed unusual strictures on alcohol election drives, such as requiring people who signed a petition to provide their voter registration numbers. Still, Hatch managed to get a measure to legalize beer and wine sales on the Buda ballot, and voters passed it. H-E-B came, and in one year Buda’s sales-tax bounty more than doubled.

Afterward, Hatch brought a lawsuit against the state challenging the constitutionality of the petition process, which seemed designed to stifle elections. A federal court, finding in his favor, told the Lege to rewrite the laws, and it did. Now petition drives have twice the time to run and require a fraction of the signatures they once did. Nearly every corner of the state has become a viable candidate for turning wet. In the decade before the Lege changed the rules, there were 99 local-option elections. In the decade since, there have been more than 900.

Hatch has turned his niche knowledge into a profitable trade, organizing local-option elections on behalf of retailers, businesspeople, and, occasionally, ordinary citizens who just want beer. He and his business partner, Sissy Day, are the king and queen of wet-dry elections; between them, they’ve transformed the character of much of rural Texas, running more than three hundred campaigns  and winning 83 percent of them.

Day handles the Metroplex, where many of these elections take place, and Hatch takes everywhere else—and specializes in what he calls the “problem children.” Chief among them this cycle is Bowie County, which has proved a particularly tough nut to crack. Hatch prides himself on the finesse and skill of his campaigns—his office, otherwise filled with A&M memorabilia, has shelves that hold eight Pollie Awards, the Oscars of political ads. But for years, Texarkana has wriggled out of his grasp.

True, he got alcohol into restaurants in 2006. But when he came back in 2011 to put beer and wine in stores, he was outmaneuvered by the liquor merchants in Arkansas, who wanted to protect their businesses from competition. “Our whole budget was, like, one hundred and thirty thousand dollars,” he says ruefully. “The [Arkansas] liquor boys spent one hundred thousand just in the last two weeks.”

E. N. Kim, the co-owner of the Fast-Low convenience store on the Texas side of Texarkana, was one minor casualty of that defeat. In anticipation of a wet victory, she cleared out a section of her store to make room for beer coolers. Today, she hawks shirts and trinkets from that spot and waits for the results of this go-round. She’s sick of watching her neighborhood customers take their business to the other side of town. “Everybody wants this,” she says.

Bowie County is a vivid example of the arbitrary nature of Texas alcohol laws. For one thing, no Texas law can change the fact that alcohol is readily available nearby. The Arkansas side of State Line Avenue, the dividing line between the two Texarkanas, is teeming with bars, gas stations loaded with beer, and warehouse-style liquor stores with names like Chubby Cheeks Liquor.

Arkansas has long supplied alcohol to Bowie County residents and reaped a fortune in tax receipts. Look at the disclosure forms for the anti-beer campaigns from past years and you’ll see the undisguised hand of the Arkansas alcohol monopoly. The Party Factory, an enormous liquor store that stocks everything from champagne to grain alcohol, donated more than $50,000 to the anti-wet effort in 2011. On August 11 Party Factory co-owner Alan Avard and another liquor store owner filed suit in district court to block Texarkana’s local-option election, though the judge rejected their arguments and dismissed the suit.

The Arkansas liquor stores may provide the financial resources, but there’s plenty of good-faith opposition to alcohol in Bowie County itself. Though Pastor Seifert often feels like a bystander in a battle between monied interests in Austin and Arkansas, he talks to members of his congregation about the evils of alcohol and the importance of abstaining. Congregants at other nearby churches, such as Wake Village’s Centre West Baptist, have become foot soldiers in the effort to turn Nash dry again.

George Dodson, a Texas-side resident of Texarkana who co-owns Hopkins Ice House, a hip bar and restaurant on the other side of the state line, would like to see his side of town reap the sales-tax receipts that alcohol brings, and he doesn’t think a change would hurt him much. But he also knows that such a shift would harm other long-established businesses on the Arkansas side of town. “I understand the angst,” Dodson says. “I wish no business ill will.” For that reason, he doesn’t know how he’ll vote in November.

Still, Dodson says, it’s only a matter of time before the county goes wet—or at least damper. “It’s coming,” he says. Like death and taxes and the setting of the sun, booze, even in Bowie County, is inevitable.