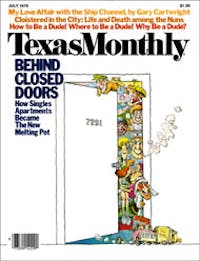 By the middle of July you may notice that your kids’ hands seem semi-permanently attached to dripping Popsicles or crumbling Fritos. By now they are eating out of sheer boredom. A long time ago I decided that if they’re going to eat all summer anyhow, they might as well learn to cook. With a little help from mom or dad, any child between the ages of six and twelve can learn to turn out edible provisions.

I have found that children get involved in the kitchen for two reasons: innate enthusiasm or sheer survival. One of Texas’ most interesting small restaurants, The Texan, located in the unlikely city of Bryan, is owned and operated by a man who was raised in a family where cooking was an art. The son of a violinist with the Boston Symphony Orchestra, Tap Tapley grew up in cramped apartments in that city listening to the mostly European symphony members discuss the finer points of making marinara sauce. He mastered that sauce and others at an early age and went on, after a small detour to get a physics degree, to make a career of his youthful passion. I grew up in a different kind of family. My working mother believed that success in the kitchen was making the Sunday roast last through Wednesday. Survival prompted my early interest in cooking and has led me to involve my children in the cooking process early as well.

It made a lot more sense to set the two-year-old up on the kitchen counter and let him roll funny little cookie balls than to leave him to amuse himself by jerking the begonia out of the pot. Now I have three children, ages fifteen, twelve, and six, who can all, at their own level, cook. By the time a child is twelve, if you’ve started him early, he can cook an entire meal. He can read and understand The Joy of Cooking, do his own marketing, and clean the kitchen as well as you can. So I will concentrate here on children under twelve. What they can do may surprise you.

Patience is the watchword. In the beginning you’ll have lots of sticky floors, flour-powdered walls, and greasy fingerprints on the canisters and refrigerator. There will be the catastrophes that result from the confusion between such things as baking powder and baking soda. And no matter what age kids begin in the kitchen, they must be supervised until they understand certain safety rules: hot grease can catch fire, pots and pans can burn hands, sharp knives will cut fingers as easily as they cut vegetables. It’s safe to assume children don’t know any of this until you have issued several dozen reminders.

Cooking has an advantage over other pursuits planned by parents. It doesn’t require well-developed motor coordination to begin in the kitchen, as it does on the piano, for example. A three-year-old will stand on a chair and cheerfully wash a cake bowl he’s just licked. At five, he can be trusted to load an unload everything except the Wedgwood in the dishwasher. By six he can operate — with supervision — those wonderful whirring machines, the blender and mixer. He’ll be reading well enough by seven to tackle a children’s cookbook.

As part of the growing interest in cooking in general in this country there are more and more children’s cookbooks on the market today. Unfortunately, though they do have easy-to-follow recipes, the overwhelming majority of those recipes are for gooey, sweet foods and things like hot dogs with melted cheese. I usually stick to Betty Crocker’s Cookbook for Boys and Girls for my children. Discrimination is an acquired trait, and I have found that when children have had a hand in the preparation they more easily appreciate the fact that pure, fresh ingredients produce the best foods.

If you dare to turn over your kitchen laboratory to the children for experiments beyond cooking chemistry, read The Kids’ Kitchen Takeover (Sara Bonnett Stein, Workman Publishing Co., 1975; $9.95 hardback, $4.95 paperback). My kids have had a great time in the kitchen performing simple but dramatic chemical experiments and projects from the book, which is suitable for ages six to twelve. And the recipes are for nourishing foods like dill pickles, cottage cheese, yogurt, and dried apples.

Cooking from a recipe develops skills that everyone needs, perhaps the most important being the ability to follow sequential directions. Fractions that may puzzle children in a mathematics book take on a practical meaning when they start wielding measuring cups and spoons.

Before you get out the mixing bowls, you will want to teach your children how to shop. Youngsters can learn to pick out a decent artichoke or eggplant and will be fascinated with the idea that a fresh fish is one with a clear eye and no smell. By the time they’re ten they’re likely to be reminding you that you are out of brown sugar. And, once their reading is in hand, kids make great label readers. When one of our children turned out to be allergic to corn and corn products, we all began to look for corn syrup, starch, and sweeteners in processed foods. Challenge them to find a cereal that has no hidden sugar in it and see what they find. Teach them the seasonality of produce by pointing out price variations in fruits and vegetables from month to month. Turn your coupon gathering over to your fourth-grader, who won’t think it’s too much trouble to cut them out and match them with products in the supermarket.

Once the shopping is done, your are ready to begin the noble experiment. Since there’s a large ability span between a six- and an eleven-year-old, I have arranged these recipes in order of difficulty.

For the kindergarten crowd: Bombs Away Egg Drop Soup

Peanut Butter a six-year-old can make.

We all know that cabbage is a cheap and good source of vitamin C. But try telling that to a kid who turns his nose up at this vegetable in any form. When a friend of mine shared her grandmother’s coleslaw recipe with me, I knew I could seduce the kids into eating it if only I could get them to take that first bite. So I named it after a character in their favorite movie. They tried it and now are making and eating what will be in our household known forever as: C-3PO’s Coleslaw

For other kinds of salads you can’t beat: Homemade Mayonnaise Mastered at Ten

If you have more than one kid in the kitchen, steaming vegetables is a perfect job to be shared by a little one and a big one. Steaming prevent loss of water-soluble vitamins B and C and if done properly produces the most luscious looking, tasting, and smelling vegetables. It’s the best way to prepare the produce after a trip to the farmer’s market. Let the five-year-old peel the carrots with a potato peeler and then have the ten-year-old watch the clock so the vegetable isn’t overcooked. Steamed Carrots With Lemon Butter Sauce

The English have always been graphic to a fault. The name of this dish is destined to delight children of all ages and raise grave doubts in the eyes of adults. Think of it as Yorkshire pudding with sausages. Toad-in-the-Hole

If you have a kid who wants to bake a cake but you are skittish about a hot oven, try this 150-year-old recipe for a wood stove. Benbow’s Cold Oven Pound Cake

Midsummer is the best time for homemade ice cream. Whether your freezer is electric or hand-crank, kids are willing ice cream makers. French Vanilla Ice Cream