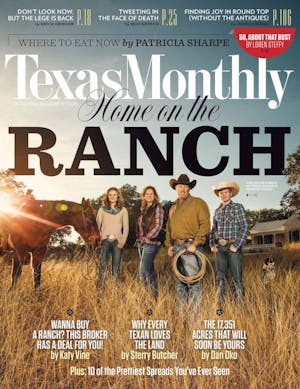 Have you heard the one about the pastry chef who walks into a feed store? “I’d like to buy a bale of hay,” he says. “What kind?” the clerk asks. Astonished to learn there are different kinds of hay, the pastry chef says, “I don’t know.” The clerk says, “Well, what are you feeding?” Realizing he probably should not announce that he intends to use the hay in cake and ice cream and feed it to human beings, the pastry chef says, “Er, horses?”

That pastry chef is 35-year-old Steven Cak, who is the master of sweets at the cutting-edge new Austin restaurant Gardner. And, in case you’re wondering, he does use hay in ice cream and cake, and I can personally attest that they are not only edible but also quite tasty. But there’s more to the story than its happy ending. The larger point is that Austin is now a city where a creative cook can fool around with crazy ideas from the world’s most avant-garde restaurants—like Michelin two-star restaurant Noma, in Copenhagen—and raise eyebrows only at the local feed store.

Open since early November, Gardner is the sibling of Contigo, a casual outdoor dining destination in East Austin that has been a major hit since it opened, in 2011, thanks to the affable presence of co-owner Ben Edgerton, 34, and the considerable talents of chef/co-owner Andrew Wiseheart, 31. But where Contigo is casual, Gardner is correct. Where Contigo is country, Gardner is city. Where Contigo’s menu is meaty and rustic, Gardner’s is vegetable-oriented and innovative. Most importantly, if Contigo had a bale of hay on the premises, the guests would be sitting on it. At Gardner it would be, well, you know.

But experimental and unexpected were just fine with the three of us—chef friends Kristine and Gina and myself—when we met up at Gardner on one of those unsettlingly warm evenings that now pass for winter in Austin. In its serene, minimalist dining room, sharp-angled blond-wood furniture stood out against a backdrop of soft grays and whites, and curvy white light fixtures hovered overhead like small glowing drones. Settling in, we turned to Gardner’s equally minimalist bill of fare, which was composed of nineteen dishes divided into Snacks, First, Second, Cheeses, and Dessert. Like so many modern menus, it was written in that maddening style that lists only a few random ingredients, leaving the guests at the mercy of the servers to explain everything. After giving our poor waiter the third degree, we started with Kristine’s number one selection: “Sunchoke Custard: seaweed, crispy onions, brown butter.”

In due time a charming pottery bowl appeared, in which we could spot a few spikes of russet seaweed and three precisely placed bright-pink calendula petals. Plunging our spoons through the layer of blossoms, we lifted bites of a light golden pudding—ah, the rootsy flavor of Jerusalem artichoke, but softened by eggs and milk. Atop the custard’s smooth surface were crinkly fried shallots and a buttery crumble. Yes, the evening was shaping up nicely.

Gina chose the second dish and I selected a third. Though they also featured vegetables, they were totally different. “Brussels Sprouts: petit basque, bone marrow” came in another lovely bowl. The marrow, removed from its bone, had been incorporated into a deeply flavored broth that almost covered a dozen plump caramelized brussels sprouts, themselves gilded with a melty layer of Basque sheep cheese (similar to pecorino romano but milder). Good though the dish was, it barely held a candle to the brilliant “Spaghetti Squash: bonito butter, pea tendrils” (pictured). Scooped from the innards of this strange vegetable, a tidy mound of pasta-like strands had been lavished with melted butter whipped with umami-rich bonito flakes. The dish’s pretty heart-shaped pea leaves and tendrils supplied an arty touch. Heavenly.

Although Gardner celebrates the vegetable kingdom, it doesn’t leave carnivores out in the cold. So we segued to seafood after spotting “Mackerel: fennel, huckleberry, lemon oil.” A server soon appeared with a graceful, mandala-like arrangement. Painstakingly layered to form a circle, slices of icy-pink fish were studded with dark-purple Oregon huckleberries, which had been steeped in white wine and mint. Adding an earthy note was pickled fennel, while a drizzle of lemon oil gave a brisk finishing touch. Even in sushi- and crudo-obsessed Austin, the dish was unlike anything that we had seen before.

Having made the leap to animal protein, we found ourselves suddenly ravenous, so we ordered the meatiest selection on the menu—“Dry Aged Beef: sweet potato, black garlic.” At $38, it was also the most expensive. Sliced into two pieces, the six-ounce boneless ribeye had a seductive ebony char and was paired with sweet potato that had been variously roasted, pickled, and juiced. We liked all three of the preparations, but it seemed like a dish that would mollify rather than gratify a serious beef lover.

After several other small plates, it was time for dessert. Even though none of us had yet heard the hay bale story, we instantly agreed that we had to order “Apple: hay, hazelnut,” because that’s what you do when you are fanatical about places that take food where no food has gone before. When our ever-patient server arrived with what looked like hunks of chocolate cake and vanilla ice cream (sided by apple slices and apple gelée), we immediately asked: “Dude, where’s our hay?” Everywhere, it turned out. Burning hay had cold-smoked the cream, hay ash gave the hazelnut cake its dark-brown color, and fresh hay infused the apple gel. We took a few nibbles, looked at one another, and took a few more. Well, where was the hay? Suddenly I flashed on a memory of chewing a stalk of dried grass on a summer afternoon when I was a child. We all had thought hay would be harsh. Turns out, it’s as delicate as your Aunt Pearl’s herb tea.

By the end of dinner and after a visit on another day, I had tried a dozen dishes, but I felt like I had only scratched Gardner’s wonderful and sometimes challenging surface. Still to be seen was what the chefs—clearly egging each other on to ever-wilder heights—would do with dishes they were planning for a forthcoming menu. Fried chicken skin, crème fraîche, and honey. Not to mention Japanese pumpkin, kumquats, and birch beer. I was dying to come back because one thing was already clear: at Gardner, hay is definitely not the final frontier.